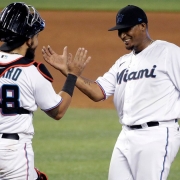 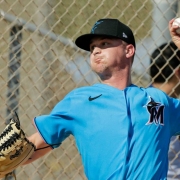 The Miami Marlins roster crunch continued ahead of Sunday’s games with the Philadelphia Phillies. The team designated infielder Eddy Alvarez for assignment, transferred LHP Brandon Leibrandt to the 60-day IL and optioned RHP Dan Castano back to the Alternate Training Site in Jupiter. To fill the 29th-man roster spot for the doubleheader, the Marlins called up LHP pitching prospect Braxton Garrett.

After splitting the first four games of this pivotal seven-game series with the Phillies, the Marlins are looking to win at least two of the next three. A sweep today would guarantee a series win for the Fish.

The addition of Garrett provides Marlins manager Don Mattingly with another arm in the bullpen, which has been taxed of late. Garrett could start Game 2 if need be. The Marlins have RHP Sixto Sanchez taking the hill for Game 1.

The Miami Marlins drafted Braxton Garrett with the number seven overall pick in the first round of the 2016 First-Year Player Draft. Garrett pitched out of Florence High School in Florence, Alabama, and had committed to pitch collegiately at Vanderbilt prior to signing with the Marlins.

At 23-years-old, Garret stands 6-foot-2 and is an elite left-handed pitching prospect. MLBPipeline lists Garrett as Miami’s No. 7 overall prospect.

The Marlins were high on Garrett and his potential to move through the system quickly. Entering his pro debut, Garrett featured a high-end curveball, considering one of if not the best in high school in 2016. Unfortunately, Garrett blew out his elbow after just four starts with the Greensboro Grasshoppers, the Marlins Single-A affiliate in the South Atlantic League. Garrett had Tommy John surgery in June of 2017.

Garrett missed all of the 2018 campaign rehabbing from the procedure but returned in 2019 and quickly found his old form. With the High-A Jupiter Hammerheads of the Florida State league, Garrett regained his momentum. He posted a 10.1 strikeout-per-nine-innings rate, which would’ve led the league if he hadn’t fallen just short of qualifying.

Garrett’s pitching arsenal features a 90-93 fastball that can touch 96 mph. He has solid command of the pitch and comes at the hitters with a downward angle that could be troublesome.

He plays off his fastball with an above-average changeup, but his best pitch remains his curveball. The low-80s offering is an above-average pitch for him and he leans on it often to tally strikeouts. It works well against both left-handed and right-handed hitters.

The key for Braxton Garrett, like so many pitchers, remains location. He issued 40 walks in 106 innings pitched in 2019. That’s something he’ll have to avoid at the MLB level. As he continues to build his arm, Garrett could add more velocity to his arsenal. He’s yet another in the long line of potential stalwarts for the Marlins rotation in the future.