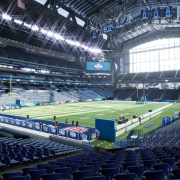 Welcome to the debut of E:5, the new multi-media ESports platform on the Five Reasons Sports Network….

Will EA make necessary changes to franchise mode in Madden 21? Or will fans have to wait another year?

Over the last several days, Madden 21 has been trending and not in a good way.

In EA’s latest update to their gridiron notes series, the Madden 21 developer team released what gamers can expect from Face of the Franchise and ‘classic franchise mode’. And while FOF received several updates and the addition of several celebrities, franchise mode did not.

Which led the gaming community to drop the #fixmaddenfranchise hashtag.

After all, EA has said for years they were going to listen to the fans and help make franchise mode great again. But like many promises, this one remained hollow at the core. Here’s a look at the minimal updates EA has made to Madden 21’s franchise mode.

Once the #fixmaddenfranchise started to trend globally, EA had no choice but to do damage control. This was the statement released by executive producer Seann Graddy:

Like with anything, all anyone wants to see is change. And with Madden 21 set to release on August 28th, I find it extremely unlikely that fans will get the type of changes they desire. But that doesn’t mean short-term fixes can’t be added with patch updates and other means. What seems most likely, however, is that diehard fans of franchise mode won’t see real change until the next generation of gaming. And even then, with EA starting–for lack of a better word from scratch–the changes fans really want probably won’t be implemented until Madden 22 and beyond.

But in less than a week, the Madden gaming community made their voices heard. We waited nearly a decade for franchise mode to be great again. I guess one more year won’t hurt.

As Five Reasons Sports continues to make its mark on the E-Sports industry. I will bring you the latest news and notes on Madden and other sports video games.