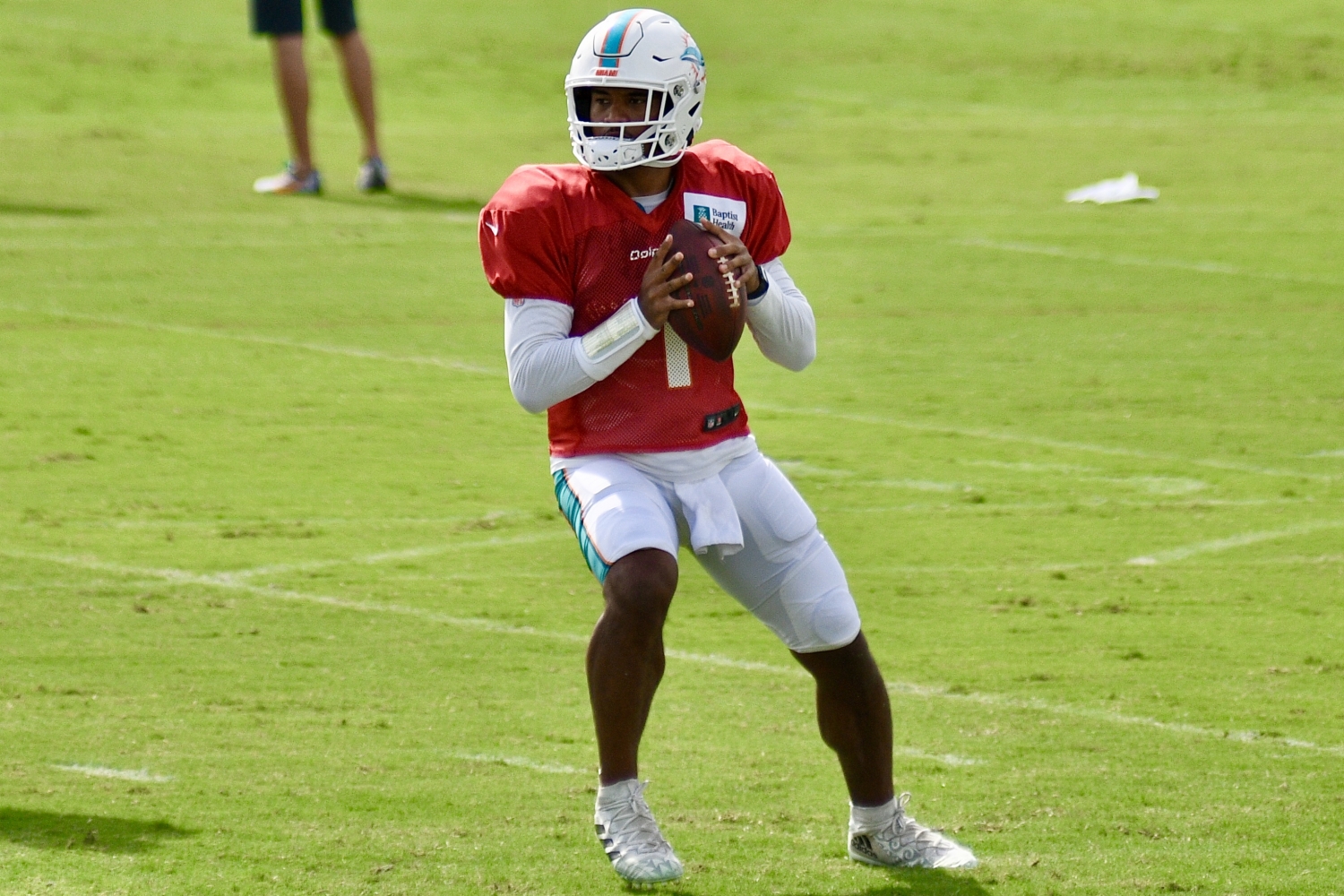 Tua Tagovailoa’s first NFL start didn’t go exactly as many expected. And while I don’t think anyone thought he would have a big performance vs. one of the best defenses in football, we did expect more than what we saw.

Maybe, we are at fault.

After all, this was Tagovailoa’s first action since a year prior when he suffered a horrific injury—that some thought may end any chance at a professional career. It was also during an unprecedented offseason, where most–if not all–of the first-team reps went to the veteran Ryan Fitzpatrick.

On Sunday, the hip looked fine as Tua moved fluidly and played a full 60 minutes for Miami in a 28-17 win over the Rams.

Tagovailoa finished 12/22 for 93 yards and one touchdown. The numbers weren’t jaw-dropping, but I think we all realize Miami’s early lead affected the play-calling as did the Rams pressure upfront.

Nevertheless, Tua and his arsenal of weapons must play much better Sunday vs. Arizona–and that includes every aspect of the game.

Cardinals QB Kyler Murray is an entirely different animal for Miami’s defense to prepare for. And although Kenyan Drake might not get the revenge game he had hoped, Chase Edmonds has been every bit, if not, more impressive than Drake in 2020. And let’s not forget De’Andre Hopkins, arguably the best WR in football. Add the timeless-legend Larry Fitzgerald and the man, the myth, the legend, Christian Kirk. Miami’s defense will have their hands full.

But just like we saw the defense step up last week when the team needed it most. The offense is going to need to do much more this week.

As we heard yesterday from offensive guard Solomon Kindley, Miami’s offensive line comes into each game expecting to keep Tua clean. That didn’t happen on Sunday, and the end result led to a fumble that inevitably leads to a Robert Woods touchdown.

kindley: "a win is a win. every day you go in sunday, monday and you look at film you're going to see something and get better from it. we try to keep him perfect. our #1 goal is no sacks and no pressures. and we didn't make our goal. we have to improve on it this week."

Miami’s wide receivers must do more.

Miami’s game plan was to get the ball out of Tua’s hands quickly. Gailey also moved the pocket for his young QB by using designed rollouts to help counter Aaron Donald and the Rams’ vaunted defense.

However, there were also instances where Tagovailoa’s wide receivers dropped the ball.

Literally and figuratively. And with Isaiah Ford headed to New England, Brian Flores needs someone, anyone, to step up.

One player who specifically needs to correct some of his consistency issues is second-year WR Preston Williams.

Williams had two drops vs. Los Angeles on Sunday. And while I won’t sit here and pretend they were game-altering miscues, they did end a few drive pre-maturely.

🦄"i just try to be there when my numbers called. me dropping balls is not helping. i'm hard on myself more than anyone can be hard on me."

Another player that Tua and the Dolphins could rely heavily on is speedy wideout, Jakeem Grant.

We all know Grant is a workout warrior, but besides a monster Monday Night Football game vs. the Patriots, he’s been kept quiet for most of his career. Unless, of course, you factor in his kick returns, but that’s a discussion for another day.

Grant admits the Dolphins skill-players need to do better, which is why the team has put in the extra work (after hours) to correct some of the obvious timing issues.

Malcolm Perry, another player that could see his role expanded over the coming weeks, had nothing but high praise for Tua.

perry on chemistry w/ tua "it's always good to have that history with someone, all the way back in camp throwing & catching with tua. & just coming out to practice every day that you want to get better. that every rep is your last rep. that w/ the history with tua is good to have

Most important, however, is that Tua Tagovailoa is aware he needs to do much more to put this offense in a position to succeed.

“I think there’s room for improvement every day for me. I’m getting more comfortable in the huddle talking to the guys, getting the plays out and kind of seeing where everyone needs to go. I think the biggest thing for me is pocket presence. Being able to just step up into what feels like pressure and then also just making the throws that I need to give the receivers good run after catch.”

From Tua to the offensive line, to the play-calling to the skill-players, Miami’s offense must play much better on Sunday. And everyone knows it. Now they must go out there and execute, and that’s exactly what I expect them to do. We know they won’t have RB1 Myles Gaskin. And to go toe-to-toe with one of the best offenses in football, EVERYONE will need to bring their A-game.

The Left Arm of God’s first start didn’t go as planned. But don’t let that deter you from your initial thoughts. Tagovailoa is everything we had hoped for and more. Good things come to those who wait, and for most Dolphins’ fans, the wait dates back to March 2000 when Dan Marino took off his cleats for the last time.

Last week’s game may not have gone exactly as we had hoped. But this is the game that Gailey and the Dolphins #LetTuaCook.

Prepare to count down 🚀 pic.twitter.com/jgxTidXwXz

The Tyler Herro-Devin Booker Comparison Is Real
Scroll to top