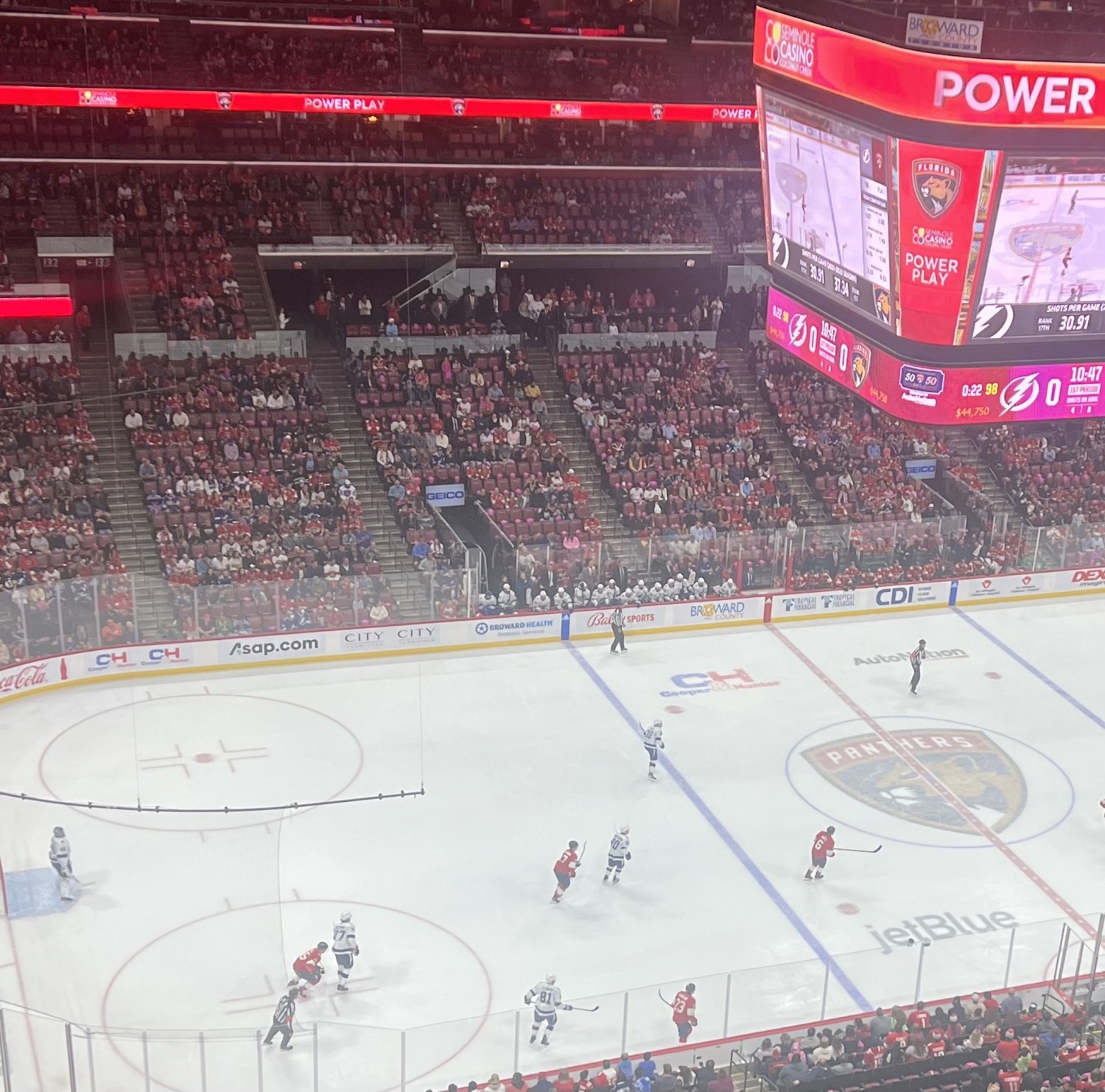 SUNRISE – The Battle of Florida returned on Friday night as the cross-state rival Tampa Bay Lightning made the journey to Sunrise to face off against the Florida Panthers.

These two teams have a lot of history over the last two seasons and tonight some new faces became acquainted with this fierce rivalry.

Tampa came out the victors of this matchup, defeating Florida 3-2 in overtime off a Brayden Point power play goal.

Matthew Tkachuk definitely had this one circled on his calendar. In his introductory press conference, he said, “I hate Edmonton, but I hate Tampa more now.” The former Calgary Flame is used to rivalries as he was a frequent noise maker in the Battle of Alberta.

In his first Battle of Florida, Tkachuk wasted no time stamping his name into the rivalry as he scored a tip-in off a Brandon Montour shot in the first period to tie the game at one a piece. This would be the first goal Tkachuk scored at home in a Panthers uniform.

Tkachuk got into the mix of it tonight with a few Lightning players, he even witnessed Corey Perry chuck his stick across the ice. Tkachuk was on the receiving end of some physicality too. He had two points tonight and continues to be the Panthers leading scorer.

Unfortunately for Tkachuk and the Panthers, he took two penalties in one play in the OT, granting Tampa a two-minute, 4-on-3 power play. As well as the Panthers PK did during regulation, going 5/6 on the kill before OT, Tampa didn’t let the extra frame head back to even-strength with Brayden Point beating Bobrovsky to win the game.

Rudolfs Balcers introduced himself to the Florida faithful on Wednesday night at the home opener when he scored his first goal with the Panthers against Philadelphia.

Tonight, Rudy extended his goal streak to two games with a huge goal in front of Andrei Vasilevskiy’s goal to give Florida the lead.

In his first year with the team, Balcers has played well alongside Matthew Tkachuk and Sam Bennett on the second line.

After playing a career-high 61 games last season in San Jose, Balcers doesn’t look out of place in Florida’s top-six.

Florida puts up shots, a lot of shots

Similar to last season’s team, this Panthers squad pushes the tempo in transition and picks up a ton of shots as a result.

Over the last three games, Florida had at least 30 shots on goal. Tonight they continued that streak, hitting it before the third period puck-drop.

A big question around the league after the hiring of Paul Maurice was if Florida could sustain the high-octane offense they had the previous season under Andrew Brunette.

Tonight was just another demonstration of the amount of chances Florida generates throughout the game.

They ended the game with 38.

A healthy Brandon Montour is big for Florida

Florida’s defense is already without their top defenseman in Aaron Ekblad for an extended period of time as he’s on LTIR. Prior to tonight, they were also without Brandon Montour for the last two games.

Florida was able to get Montour’s services back tonight and it was much needed. The 28-year-old had the most ice-time for the d-corps, clocking in just over 23 minutes.

Montour also picked up points on both of Florida’s goals tonight. He’s going to be relied on heavily this season, specifically during the absence of Ekblad.

Montour didn’t play on the top power play unit tonight as he did to start the season, however he could be seeing time on that top unit again sooner than later.

Too much time in the box

The Lightning know how to work a power play. They waste no time moving the puck and use multiple players as bumpers, so the opposition has to respect all five guys on the ice.

Florida’s PP did a good job at stopping Tampa’s PP onslaught in regulation after the Stamkos goal, but in these tight games, spending so much time in the box is a momentum killer for the most part and Florida looked like the better team 5-on-5.

Tampa retaining control on their 4-on-3 overtime PP gave them way too much open ice in the zone and it ended with Florida only picking up one point from this game.