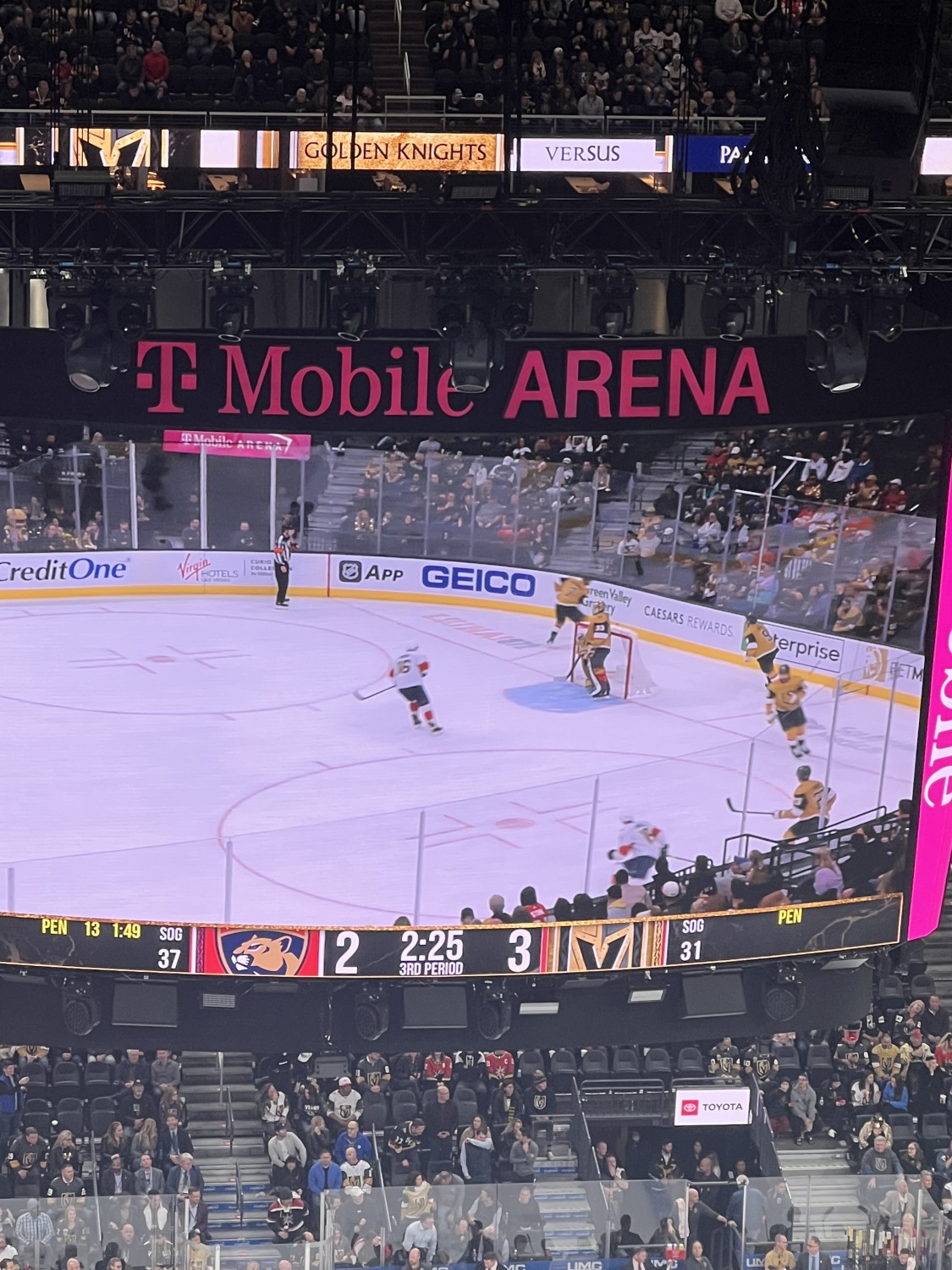 VEGAS – Florida ended their four game road trip in Thursday night with a 4-2 loss to the Vegas Golden Knights.

The Panthers finished the trip with a 2-2 record.

They’ll return home for a Saturday night clash against the Vancouver Canucks before hitting the road again for a trio of Atlantic Division matchups.

Florida entered the first intermission with a 1-0 lead, but it wasn’t a dominating period for the Panthers by any means.

Vegas didn’t take their foot off the gas in the opening period and they were pretty much all over the Panthers for the first half of the period.

Even with a one goal deficit, the Knights stuck to their game; hard fore-checking, clean breakouts and puck possession in the o-zone.

Sergei Bobrovsky weathered the storm of high-quality Vegas chances, stopping all 14 shots he faced in the first.

Florida strikes on their first man-advantage

The first power play of the game for either side came midway through the second period.

With Florida on the man-advantage in a tied game that saw Vegas dominating to that point, a successful power play would be very helpful to change the flow of the game.

On the back end of the power play, Aleksander Barkov fed a streaking Sam Bennett a glorious look at goal, but the play was ended by Knights’ goalie Adin Hill. On the play, Hill lost his stick while another Knights’ player broke his, leaving the Knights exposed around the crease.

The Panthers used the Knights’ misfortune to their advantage. Matthew Tkachuk hit an uncovered Sam Reinhart in the bumper position and Reinhart buried the shot past Hill, giving the Panthers a 2-1 lead.

This is game number two in which Anton Lundell is playing on Aleksander Barkov’s wing.

Paul Maurice decided to move the natural centerman to the wing in order to “Take some pressure off of him being down low.”

With Lundell not having the same defensive responsibilities he would need as a center, the ice is opening up for him and it was very clear that was the case tonight.

Lundell appeared to have given the Panthers a 3-1 lead in the second period after he roofed a shot on a tight angle into the net. However, following a Vegas coaches’ challenge, the play was deemed offsides and the goal was taken off the board.

Despite the disallowed goal, the play showed how much space Lundell has when he’s playing along the boards.

A few minutes later, Lundell and Barkov played an aggressive gap near the Knights’ blueline. Barkov caused the turnover and stretched a breakaway pass to Lundell. If Lundell was playing down the middle, that play probably wouldn’t have occurred since he would’ve been playing lower in the zone.

Panthers fail to convert on a third period 5-on-3

Florida had a glorious opportunity to put their stamp on this game in the third period.

The hot Panthers had 1:44 of 5-on-3 power play time in a 2-1 game. In such a tight game, just one goal would’ve given Florida some breathing room.

The Panthers had their top unit out there for nearly the entire man advantage but could not find the back of the net.

On the other side of the ice, Vegas picked up the momentum off the big kill.

It only took a few minutes after the kill to find the equalizer, off a Jack Eichel breakaway goal.

The Knights odd-man rushes proved troublesome for the Panthers

Looking back to the effective breakouts from Vegas tonight, the area where they really had Florida on their toes was off the rush.

The Knights had plenty of odd-man rush chances in the game, whether that was two-on-ones, three-on-twos or breakaways.

Jack Eichel’s tying goal in the third came via an offensive zone mishap by the Panthers blue line and a subsequent neutral zone lapse by the defense.

The same exact play happened later in the period with the same pairing, only this time the crossbar kept the Knights out of the goal.

Vegas would get the go ahead goal with 2:36 left in the third and seal the game away with an empty netter.

Five Takeaways from Heat’s Win Over Bucks
Scroll to top