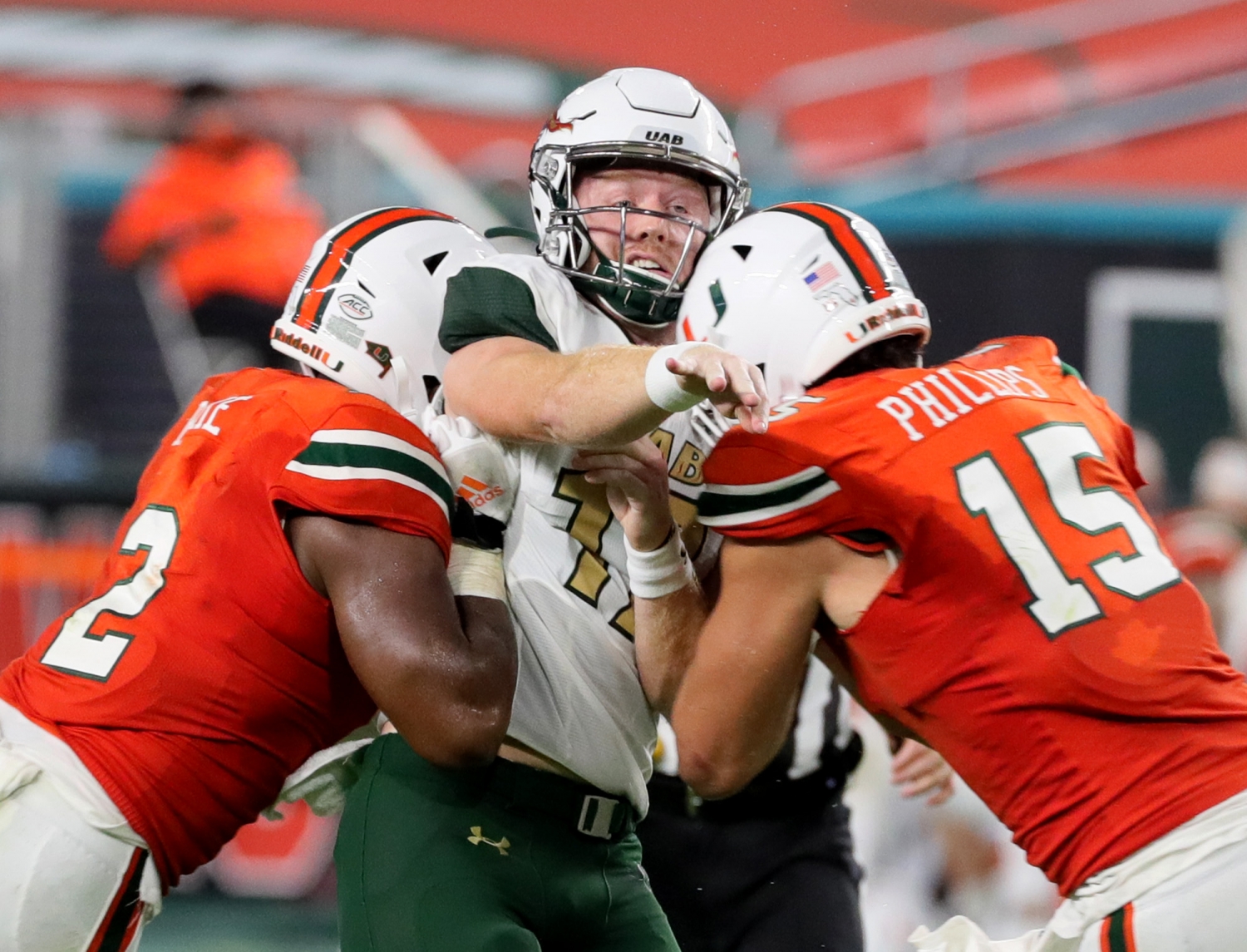 On Sunday afternoon, the 18th-ranked Miami Hurricanes announced that they are slated to face 21st-ranked Oklahoma State in the Cheez-It Bowl on December 29th. The game will take place at Camping World Stadium in Orlando at 5:30 PM and will be televised by ESPN.

The Canes, however, will be without two of their biggest weapons on defense for this game: defensive ends Jaelan Phillips and Quincy Roche, who are both opting to forego the rest of their eligibility to enter the NFL Draft.

It had been reported by the Miami Herald on Saturday that Phillips had signed with agents Ben Renzin and Brian Ayrault. He had essentially confirmed the news by posting a video on Twitter, thanking the program and fans for welcoming him with open arms.

On Mel Kiper’s most recent Big Board, Phillips is ranked as the top defensive end prospect, as he leapfrogged former Miami end Gregory Rousseau (Rousseau decided to opt out of the 20202 season entirely.)

Phillips transferred to Miami in 2019 from UCLA, where he was a former #1 recruit but struggled with injuries to a point where he medically retired after two seasons.

Phillips finishes the season with 45 tackles, 15.5 tackles-for-loss, 8 sacks, and 1 interception. That sack total has him tied for 2nd in the ACC.

As for Roche, he tweeted out his announcement later that afternoon. As of Sunday, he is ranked as the 4th-best prospect at outside linebacker on Mel Kiper’s Big Board. Roche was a grad transfer from Temple, where he was already considered one of the best defensive ends in the nation before arriving in Coral Gables.

Roche finishes his lone season at Miami with 45 tackles, 14.5 tackles-for-loss, and 4.5 sacks.

Coach Manny Diaz mentioned in a press conference that they will most likely find about any other opt-outs within the next 24 hours, as the team will commence bowl practice on Monday.

TE Brevin Jordan, who is also a top prospect for the upcoming NFL Draft should he opt out, is expected to play as is QB D’Eriq King.

Keep it locked with @PaulAustria_ and @SixthRingCanes on Twitter for the latest in Miami Hurricanes news and recruiting. Check out this last Wednesday’s episode of The Sixth Ring, where we discussed our thoughts on this class. Stay tuned for another episode soon, while we have special guest and South Florida recruiting guru Larry Blustein on to give us his thoughts.

Also, sign up for an account on Prizepicks.com, where you can pick the over/under on fantasy projections on some of your favorite players. There’s no better time to sign up than now as the NFL season starts to wind down while the NBA season is right around the corner. Enter the promo code “five” to double your initial deposit.

Max Strus: “Not Just a Shooter”

Betting Better: How to Win in the NFL Game
Scroll to top