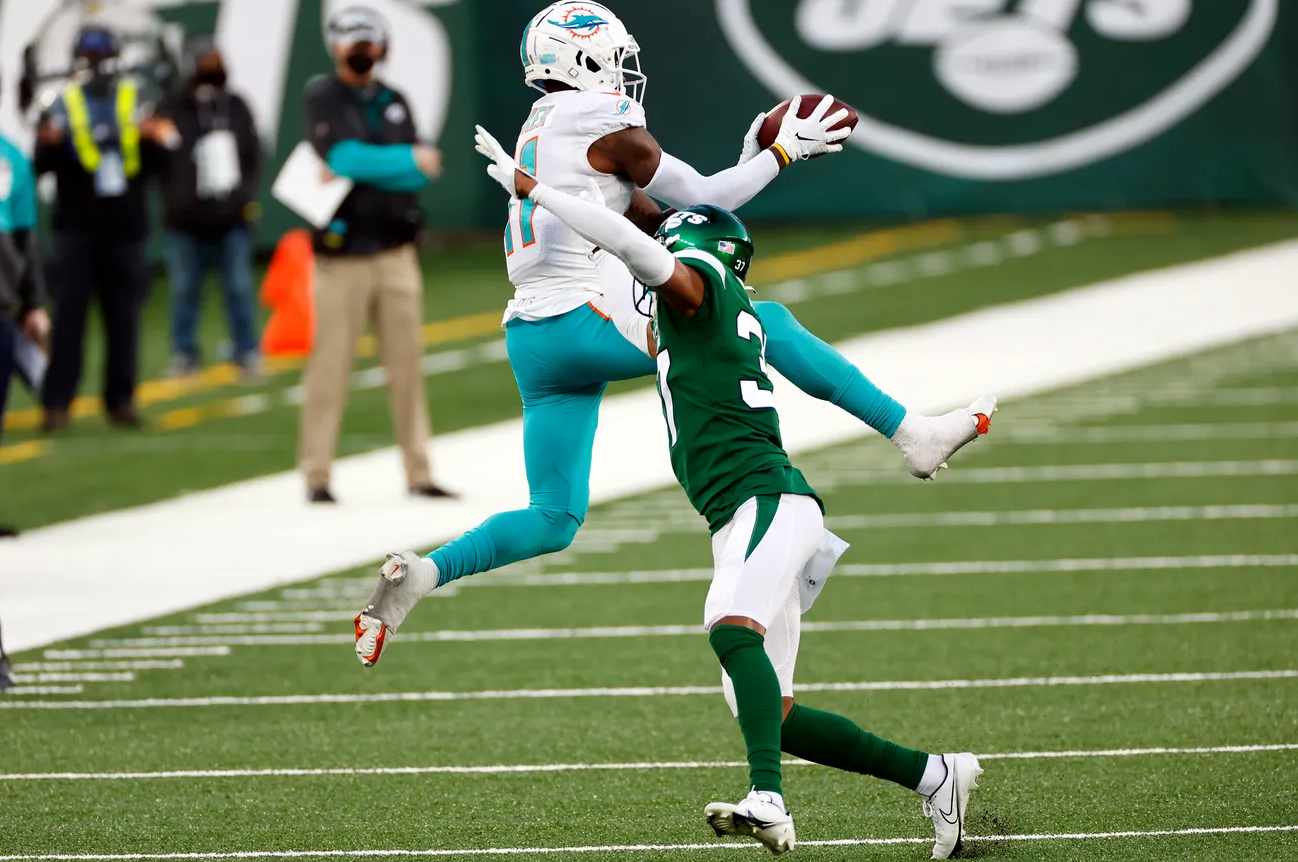 Welcome back to another installment of Stock Up & Stock Down. In Week 12 of the NFL season our Miami Dolphins traveled to face a division rival in the New York Jets and were able to come out on top with a score of 20-3. Being led by our defense (as usual) and a surprisingly even keel performance from Ryan Fitzpatrick. A victory that we led throughout still left a dissatisfied taste in my mouth so with so much to dissect let’s dive right in:

After a year where we saw Devante Parker take his game to a level, we have never seen from him, many of us who follow the Dolphins were curious to see what type of season he would have to confirm if last year was a fluke or a sign of what’s to come. Unfortunately, due to the pandemic, nagging injuries and Qb changes, DVP hasn’t had a fair chance this year to show what he’s made of. Only twice all year has Devante been targeted more than 10 times with shocking results. The first against Seattle where he went off for 10 catches on 12 targets for 110 yards. The second came this week against the Jets where he converted 14 targets into 8 catches for 119 yards. Without getting ahead of myself and proclaiming that we need to feed DVP 10+ targets every game, what we do need to do is get him going in the offense early and often in every game, to get him into the rhythm of the game as the center piece of our offense.

Coming off 2 uneven performances for the offense against the Chargers and Broncos, we saw a completely different offensive performance. Whether you can place that on Fitz being out there or on playing the Jets, but we saw a way more effective offensive on Sunday. 8-16 on 3rd down, over 300 total yards, 100 total yards rushing, and winning the time of possession. While most want to vilify Gailey and make it seem like he just loves Fitz more like a son so he allows him more freedom, I would say my only critique on Gailey would be to allow Tua the same slack that’s given to Fitz. Gailey feels comfortable enough to run the same play back-to-back with Fitz and also allows Fitz the ability to continue to throw himself into a rhythm regardless of how the first few passes went. With Tua, it feels like if he doesn’t get into rhythm early, we are heading for an afternoon filled with 1- and 2-yard rushes.

Raekwon Davis is blossoming before our own eyes. Each week it feels it’s harder and harder to get him off the field for any reason outside of him being gassed and tired. PFF ranked Raekwon 2 weeks ago as the number 1 overall DT, last week he came in as the number 1 ranked rookie IDL and I cannot wait to see where he comes ranked this week. Every passing week my analysis of him showed that he was so close to getting hist first sack and it finally came against the Jets. It wasn’t a full sack as it was 0.5 with KVN but it still shows that the more he stays consistent with his technique and effort, the sky is the limit for him.

I missed the Raekwon sack realtime. Had to go back and see it. Feeling like a momma bird seeing the chick flying for the first time 🥲 pic.twitter.com/XgjxxhASRr

One of the biggest areas that need to get attacked with a multitude of ways has to be the RB room. I would not object to have any of the RB from this year outside of Myles and Ahmed comeback to compete with the talent we should be bringing in this next offseason. This group top to bottom has done next to nothing from Jordan Howard only gaining 1or 2 yards to Breida forgetting how to run and now we have Myles and Ahmed both out. Outside of Deandre Washington who we recently traded for (he only averaged. 3.8 ypc) both Breida and Laird were benched due to fumbles and yet we somehow still ended up with over 100 yards rushing.

Another of my biggest disappointments have been the play of anyone attempting to soak up Preston’s snaps after his injury. Jakeem specifically comes to mind because he is always someone that flashes in limited opportunities, but we never seem willing to give him extended time with the offense. The past couple weeks have been different as Jakeem has exclusively had a chance to replace Preston with sprinkles of Antonio Calloway and Mack Hollins. Jakeem unfortunately, hasn’t taken advantage of the opportunities being given to him regardless if its Tua or Fitzpatrick out there throwing him passes. After the Preston injury against the Cardinals, Jakeem has totaled 8 catches on 13 targets for only 70 yards and 1 td. Those numbers would be impressive in 1 game but unfortunately are 3 games worth of stats.

For the year the Dolphins have given up 24 sacks on the year. The first 14 came in the first 10 games with the last 10 sacks coming in the last 2 games. After the Broncos game, it was very obvious that the Jets were trying to do similar things to what was done to us last week. A lot of stunts and rushing from exotic alignments that confused us last week had similar results this week. Until we show on tape the ability the communicate clearly and to block 4 when you have 5 blockers, teams will continue to attack us. Last week I assumed that the lack of communication on the OLIne was on Tua being out of sync and not getting into a rhythm. With Fitz and all the years of experience he brings playing this week, there should have been no reason for the Oline to again struggle the same unless the problem is Karras as the “QB” of the Oline.

Overall, we didn’t win in a convincing enough fashion for us to have played a winless team. Regardless of who we played, we took care of business and improved our record to 7-4 on the year and in the middle of a playoff push. Next week we get the Bengals coming into town (with no Joe Burrow) and it’s another game similar to the Jets, where we should beat a team we are favored to win against.  Till next time guys, Fins Up!

The Meyers Leonard Return: Running it Back
Scroll to top