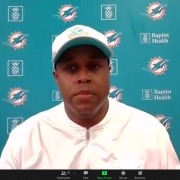 There are few things more pointless than an NFL general manager’s press conferences eight days before the draft. But that’s not stopping us all from trying to weed through the smoke like Ricky Williams trying to find any hint as to what Dolphins might do in the 2021 NFL draft. So without further ado, here are some of Chris Grier’s most notable comments from his 4/21 press conference..

Warning | All of this was said 8 days before the 2021 NFL Draft. Like EVERYTHING this time of the year, please take it with a grain of pink Himalayan sea salt.

I really don’t believe words can do it justice. So please, take a listen for yourself.

Trade up? Trade down? The Miami Dolphins are always open for business.

I will never pretend to know what the Miami Dolphins’ draft plans are, especially now that there’s a new regime in town. But one thing that was clear when the Dolphins traded up with the Philadephia Eagles, at least in my opinion anyway, is that they had their eye on a particular player or players that they believe will be drafted between picks 5-10. Grier reiterated that earlier today when he suggested it was important to get back up into the top-10.

But that doesn’t mean the team is done trading. Not one bit.

Opt-Outs Don’t matter to Chris Grier and the Dolphins.

Rumblings were going around that the Miami Dolphins may or may not be interested in players that chose to sit out the 2020 season. That always seemed a bit silly, but Chris Grier himself decided to go Mythbusters when asked the question earlier today.

chris grier on opt-outs "it's not right for us to hold it against any player. we don't don't know every circumstance. a lot of players opted out. some schools played 4 gms, some played 10, it would never be apples to apples. for us to judge players on opt-outs is unfair."

Sure, maybe this is all smoke and mirrors. But to think that Chris Grier or Brian Flores would pass on Micah Parsons, Penei Sewell, Ja’Marr Chase, or any talented player that may have opted out and fits what the team believes in because they didn’t play collegiately in 2020, is sadly mistaken. Nevertheless, it had to be asked and should give those Ja’Marr Chase stans plenty of hope if the Cincinnati Bengals were to pass on him at No.5.

If you have pre-ordered you can now access it here: https://t.co/FqlYmmoNOf pic.twitter.com/kpHqOWo1t6

KVN is gone, and the youth movement has started

When the Dolphins released Kyle Van Noy, many people wondered why–including Kyle Van Noy himself. Some thought maybe there was more to the story, while others saw it for what it was–an opportunity for players like Andrew Van Ginkel, Vince Biegel, and even Jerome Baker to see more opportunities rushing the passer. Add in newly signed linebacker Brennan Scarlett and the inevitable rookie or two they add in next week’s draft. The position should be more than fine moving forward.

grier on KVN & the current state of the EDGE position

"he did a good job for us last year…we wish him the best. but we have some young players that we're developing and we felt good about. and those guys need to get on the field."

Tua Tagovailoa, No Matter What

Speaking of year two jumps, This saying has been going around Twitter for the better part of two years, and now with the draft eight days away, truer words have not been spoken. To hell with rumors of Deshaun Watson or PFF mock drafts suggesting Justin Fields or Zach Wilson at #3, this is Tua Tagovailoa’s team. And he’s been working hard AF all offseason long.

grier on tua "communication has been great. he's been around. he's been working hard. he's working with the WRs. he's a very competitive kid. coming off the injury, no OTAs, no camp, and being just thrown in. that's a hard transition…he's healthy now, he's working very hard.

grier on tua: "he's gonna take the next step. he's been a winner everywhere he's been."

Chris Grier even went as far as admitting he saw some of the thirsty pictures of Tua, despite not really paying attention to social media. Good one, Chris. You and I both know your wallpaper is a photo of Tua Flexing like Big Poppa Pump. AND I’M SURE GRIER SHOWED ALL YOUR FRIENDS the video of Tua catching heavy wands while balancing on a skateboard as if he were Rodney Mullen or Tony Hawk.

I don’t remember what the point is anymore. Oh yes, Tua Tagovailoa is the Dolphins starting QB, whether you like it or not. 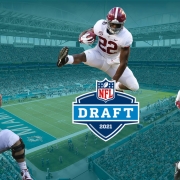 Let’s take a look at what Tankathon has the Miami Dolphins doing in their latest three-round mock draft.

Yes, I know. It’s way too early to start talking about the 2021 NFL draft.

And how strange is that to say? Despite last week’s loss to the gritty Denver Broncos, the Miami Dolphins are currently 6-4 with the New York Jets and Cincinnati Bengals on the horizon.

Nevertheless, as the season plays out we’re starting to see the pieces the Dolphins are missing–primarily on the offensive side of the football.

Then Preston Williams went down with an injury, that could put an end to his 2020 season.

And who can forget the Dolphins HELPING OUT THE NEW ENGLAND PATRIOTS and trading away Isaiah Ford. Which, say whatever you want about his long-term future in Miami, he was widely considered the smartest receiver in the room before his departure. He also had success in the slot, which is where the Dolphins need someone to step up.

But this isn’t about the 2020 Miami Dolphins.

This is about those four top-50 draft picks the team currently holds in next year’s draft–five in the top-81. And in year three of a rebuild, Chris Grier and Brian Flores know exactly what’s needed. And as I’ve said throughout, it starts with the offensive side of the football.

The first few picks in the latest Tankathon mock draft is what you would expect to see in any mock. Trevor Lawrence goes #1 to the New York Jets followed by Justin Fields to the Jacksonville Jaguars. Oregon offensive tackle Penei Sewell lands in Cincinnati to protect Joe Burrow’s blindside #GetWellSoon and a personal favorite of mine lands in Dallas. Washington takes BYU quarterback Zach Wilson to round out the top-5.

But enough about the other teams.

What do the Miami Dolphins do to add firepower to their offense?

As things currently stand, the Miami Dolphins have the #9th overall pick thanks to Bill O’Brien and the Houston Texans. Miami could go a couple different directions with this pick but since Micah Parsons and Ja’Marr Chase have already been selected, the Dolphins turn their attention to another dynamic wide receiver. 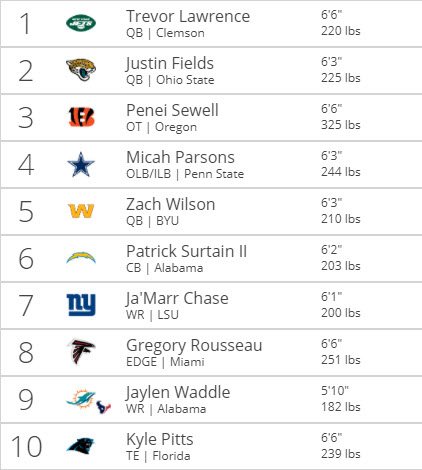 If there is one thing that we’re quickly starting to learn this season it’s that the Dolphins offense is in dire need of playmakers. And the type of speed and big-play ability that Alabama wide receiver Jaylen Waddle would bring to this offense is immense. And we can’t overlook the chemistry he already has with Tua Tagovailoa. Yes, Waddle suffered an injury earlier in the season that could potentially affect his draft stock. But with whispers that he could try to make a comeback later in the season, top-10 might be his floor.

no one will be upset if you reunite tua with waddle, @miamidolphins pic.twitter.com/V1Ne8Kuq3b 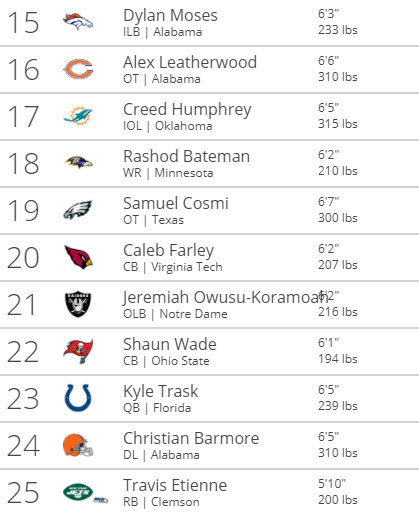 I’m not going to sit here and talk negatively about Ted Karras, because I don’t think we get a full sense of what a center’s responsibilities really is without being on the field/in the huddle. But much like Daniel Kilgore last season, it’s clear the Dolphins could use an upgrade at the position. Which is why if Creed Humphrey is available with the 17th pick in the draft, you run to the podium. Humphrey is a mauler and if reports are true that Miami had interest in Cesar Ruiz last season, the writing is on the wall.

(Note: Yes, I am a huge fan of Travis Etienne and believed he was RB1 last season. As tempting as that would be–and I wouldn’t be upset–I think Humphrey would be the RIGHT move, especially based on what the Dolphins do in the next round.)

The first pick in round 2 is going to make readers a bit upset. Because despite Miami Hurricanes pass-rusher Quincy Roche sitting ripe for the picking, Tankathon has other plans. 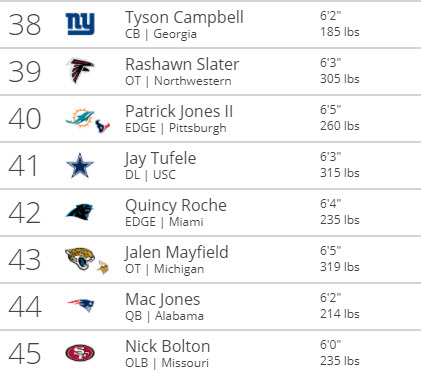 In the limited time I’ve spent watching Patrick Jones, you can see that he is a freak that can attack the quarterback in a variety of different ways. He’s also proven to be stout against the run, which is a trait the Dolphins so desperately need when looking for their future EDGE players. Adding Jones to the mix of young, impactful players in the house will open things up for Brian Flores and his staff and give them new ways to attack opposing QBs.

But that was only the first of the Dolphins’ two second round picks.

With the 50th pick in the 2021 NFL draft, the Miami Dolphins select: Najee Harris, Running Back, Alabama

As I alluded to above, the Dolphins pass on my RB1, but that’s okay. There are plenty of backs that are more than capable, and as we’ve seen with other positions, the scheme and the supporting cast has everything to do with a player’s success. With Etienne off the board, that leaves the perfect running back to pair with Tua Tagovailoa. Harris can do it all. And as easy as it is to compare him to the once-great Derrek Henry, you’d be crazy not to see similar players. What may be most impressive is Harris is a better receiver than Henry (IMO). Nevertheless, he’s exactly what Miami needs at running back to compliment the Myles Gaskin and Salvon Ahmeds of the world.

The ONLY player in @AlabamaFTBL history with 16 rush TDs through seven games:

The fifth and final pick in Tankathon’s three-round mock draft is another versatile defensive back that could play all over Coach Flores defense.

With the 81st pick in the 2021 NFL draft, the Miami Dolphins select: Ar’Darius Washington, Safety, TCU

TCU safety Ar’Darius Washington is one of the most versatile DBs eligible for 2021. The NFL is a “more you can do” league…. pic.twitter.com/OP8vl4Pf7W