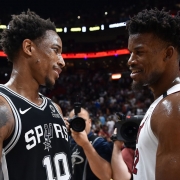 There have been many talks in the past about DeMar DeRozan possibly taking his talents to South Beach. But is there still a possibility?

DeMar has a player option for the last year of his deal, which means he will stay with San Antonio since he will not be passing up on $27.7 Million.

But there’s still a chance Miami could be eyeing him in a trade package. There’s been talks about Miami packaging Kendrick Nunn and Kelly Olynyk to try and get a guy like Victor Oladipo, but what if they did the same with DeMar?

This could be a one year rental before he hits free agency in 2021, which Miami will be going hard at Giannis Antetokounmpo. But why not try to make another run at the NBA finals, with as much talent as possible.

Obviously there are cons to doing this. For one, you’re giving up a young project in Kendrick Nunn for DeMar for only one year. It’s very possible though since Pat Riley is constantly in win now mode.

Another con is that they’re not bringing in the same defensive specialist as they would with Victor Oladipo, but DeMar is so talented it may not matter.

Three-point shooting would not be ideal as well, since Jimmy Butler, Bam Adebayo, and DeMar DeRozan would be sharing the floor. But it may not matter since they have Duncan Robinson and Tyler Herro, who can keep the shooting afloat alone.

There are also a bunch of pros to this as well. Adding a natural scorer like DeMar may not be the worst thing in the world. He averaged 22 points a game this past season, and is absolutely deadly from the mid-range. And since Miami’s three point shooting last season was off the charts, adding some offensive flavor may work out well.

Another reason that these talks have occurred this season is that Jimmy Butler is close with DeMar. And after watching what Jimmy had to do with the offense in the NBA finals, it would’ve been nice for DeMar to take some weight off of him.

Obviously, once again, this is all speculation and it may not be the best overall fit for this team, but there’s always a chance for Pat Riley to make a win now move since Jimmy Butler isn’t getting any younger.

Would a big three of Jimmy Butler, Bam Adebayo, and DeMar DeRozan make some noise in this upcoming season?