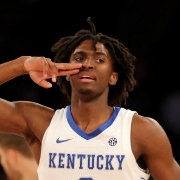 The NBA Draft process is clearly going to be different this year due to the unique circumstances, but it may benefit the Miami Heat.

Since Free Agency opens up before the draft, this allows them to try and make their moves, and they can fill holes in the draft afterward. And this is also predicated on Miami keeping the 20th pick in the draft, since it’s very possible that they trade it.

But if they do elect to keep their pick, it seems as if their two options are a defensive guard and a true big man.

If Miami grabs a big man in free agency, that means that they will go for the defensive guard, which I believe Tyrese Maxey will be at the top of that list.

He’s a great on-ball defender with a ton of speed and great at attacking the basket. It’s very clear that Miami could use a speedy defender to take on some of these guard match-ups, and he’s shown that he can be that guy. He also brings intensity on that end of the floor, which I’m sure has caught the eye of some people in the Miami Heat organization.

And he’s just a natural scorer. He has shown throughout this past season that he’s very comfortable with the ball in his hands when trying to make a play. He can score at all three levels as well, which makes him very intriguing.

But, the only issue I see with this pick is that he’s not a true point guard. And since Miami has their future 2 guard in Tyler Herro, that position isn’t available. I do believe though that he has the ability to become a point guard if he came to Miami, since he already has the play-making down.

Another issue that people mention is that he’s a streaky scorer. While that may be partly true, that was what people said about Tyler Herro when he entered the draft, which is why I don’t believe that to be important. And he has very fluid shot mechanics, which is another reason this is not a huge issue.

And by the way, he’s a Kentucky Wildcat. That should tell you automatically that he will be a guy they’re looking at.

I do believe that if Tyrese Maxey is still on the board among the rest of the guards, Miami will take him. But what about if they need a big man?

There are a ton of big men in this draft class, especially late, but the only issue is that most of them are all undersized. And that’s exactly what Miami doesn’t need.

That is why I believe that Miami could make another unexpected pick and take Vernon Carey Jr.

And even Vernon Carey Jr is undersized for the center position, but his big frame allows him to play much bigger than 6’10.

He has a lot of the things that Miami needs in a big man. He plays very physical and thrives when he puts his back to the basket, due to his solid footwork in the post. Miami definitely needs a true big, which is why I believe he’s the guy that can absolutely develop in Miami’s system.

He’s a solid rebounder as well, mostly because he’s very crafty at boxing out opponents and getting position. This is another thing Miami could use, since they need a big that can rebound. He may not be the most elite rim protector, but his outstanding anticipation allows him to get blocks at the rim.

When people discuss Vernon Carey Jr’s downfall, it usually has something to do with his weight, since there’s questions about durability. Well, what better place to come to when trying to fix that, since they will get him in Miami Heat shape in no time.

He also has a bunch of ties to South Florida since that’s where he grew up and went to high school, which is another reason I know Miami has eyes on him.

Obviously there’s still uncertainty if Miami will elect to keep this 20th pick, but if they do, I believe that these two will be at the top of their list based off need.

A Kentucky Wildcat and a Duke Blue Devil at the top of Pat Riley’s list.