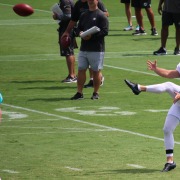 Dolphins head coach Brian Flores knows better than most how important special teams are. While fans and analysts alike were scratching their hands when the Dolphins drafted long snapper Blake Ferguson in the sixth round of the 2020 NFL Draft, Miami was patting themselves on the back. They knew that clean snaps were crucial to the success of the team’s kickers. It paid off through Jason Sanders. Now, to further improve the special teams unit, the Dolphins moved on from punter Matt Haack. To take his place is Michael Palardy.

From the very first day, everyone could tell Miami made an excellent choice.

The moment he began punting footballs, the difference in quality from his predecessor was easy to point out. Punts went where they were supposed to go. Excellent hang time. No awful shanks that left the Dolphins in a bad position.

All of this after Palardy suffered an injury that derailed a career that was going as well as a punter’s career possibly could.

“I was playing around and I just stepped wrong and I fell and collapsed to the ground.” Palardy said. “At that point, I knew something was up. This is kind of one of those things that you can’t really control and last year was tough, not being able to play. It was my first major injury like that. My entire career I’ve been healthy for the most part. It was tough to sit and watch; but I got through it and I’m here now and I’m happy to be here and I feel great. My surgery went well, my recovery went really well and I feel back to being my old self.”

Palardy’s old self bounced from team to team for the first three years of his career. He signed with eight different teams, one of which was a CFL team – the Toronto Argonauts. He finally found a home with the Carolina Panthers on November 14, 2016 after punter Andy Lee went on injured reserve. The next year, he won the starting job from Lee, and punted well enough to earn a 3-year extension that he signed in 2018, and he continued his path to becoming a top NFL punter.

But that’s when things went sideways for Michael Palardy.

In 2020, Palardy was placed on the reserve/non-football injury list (NFI) after suffering a torn ACL in the offseason. Then he landed on the reserve/COVID-19 list in December. Just two months later, the Panthers decided Michael Palardy’s time was up.

For a while, Palardy thought the same thing.

“My first two and a half years I was probably the epitome of a journeyman. I was on nine, 10 maybe 11 teams. Sometimes I lose track. (I had) 26 different workouts, so I was all over the place, I was always looking for an opportunity. I think that allowed me to really appreciate having the opportunity of being at a place like here and Carolina the previous five seasons. You grow a different appreciation for the game when that kind of stuff happens, when you struggle a little bit and that’s what I did. There were times where I questioned whether or not I’d be able to get an opportunity again because that window is very small.”

One can only imagine the relief Palardy felt when the Dolphins called his number.

“I wasn’t done with my rehab at the time and a little bit after I had gotten released, my agent got a call from Mr. (Chris) Grier showing interest.” Palardy said. “I came for a visit and I think I meshed really well with what they wanted to do and the intensity that they put on special teams. There’s a lot of value to that. That’s something that I hold near and dear to my heart; coaches, head coach, Coach (Brian) Flores, Coach (Danny) Crossman, the intensity that they put on the kicking game is something that I value. It was a good fit.”

No one talks about it, but special teams can make or break a football game. There’s a stark difference between a team having to start from their own 10-yard line, or their own 35-yard line because a punter made a mistake. Michael Palardy and his performance in training camp so far is very encouraging. If he does as well during the regular season, Miami may need to seriously consider extending him beyond the 1-year deal they gave him.

“He’s been consistent, which is where it all starts.” Special teams coordinator Danny Crossman said. “We’ve got to be good every single day. He’s talented. He’s got some experience so I like where we’re heading. Again, we’ve been at this for 10 days and we just got the pads on. So we have a long way to go.”

Michael Palardy and his punting could ensure opponents will constantly have a long way to go as well.