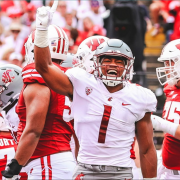 The Senior Bowl just released it’s 2022 mid-season All Riser team. It consists of offensive and defensive players that have risen two rounds or more on the Senior Bowl board from their Junior year tape grades.

Let’s take a look at the defensive prospects.

Keion White joined Old Dominion as a freshman and transferred to Georgia Tech as a junior. Before making the transition to an EDGE rusher, White was a Tight end. He made Bruce Feldmans “Freaks list”.

“White was a devastating player for Old Dominion in 2019, making 19 TFLs. He was 265 then. He transferred to Tech, but then suffered an ankle injury that sidelined him. He’s now 6-4, 290, and primed to be a problem for ACC teams. White has hit 21 mph despite being almost 300 pounds. He also has vertical-jumped 32 inches and done 38 reps of 225 on the bench press.”

White is a well-built and dense-framed defensive end. He plays with good power on initial contact that can help soften edges and rush angles. His power in short spaces is effective. He’s a high-motor player, and he shows good enough hand use, as well as a tight spin move, to win as an edge rusher.

Michigan EDGE rusher Mike Morris leads the Wolverines with five sacks on the season and third best in the Big Ten conference overall. As a junior, behind David Ojabo and Aidan Hutchinson, In 2022 as a junior Morris played in 4 games and contributed on 107 snaps, he recorded just 5 tackles, no assists while making 7 stops.

Morris explodes off the line with a quick first step, with agile feet to counter inside and closing burst to finish plays. His hand use is excellent; he’s strong in the upper body and consistently swats away blockers. As a pass rusher his junior year, he produced 14 total pressures, which included 10 QB hurries, one QB hit, and 3 sacks on the year.

“He’s one of those types of guys that he’s good at so many things. I think at some times, it’s like, ‘Oh, we can do this with him, we can do that with him.’ But he’s also a really good one-on-one rusher. And I think that’s what he’s proven to me. I think the most (he’s improved) is he has a great ability to win one on ones using his tools and what he’s good at a really consistent level.”

Clemson defensive tackle Tyler Davis has made an immediate impact at Clemson, earning the starting role in his first career game as a true freshman in 2019 and becoming a key interior piece for Clemson’s defense ever since. Davis looks like a potential pro starter and top 100 pick, ideally suited for a team that utilizes a rotation heavy defensive line.

Hearing from his head coach, Dabo Swinney, Davis is “Fundamentally sound. Technically sound. Relentless with his effort.” A compactly built, high-motor lineman, he brings a nice blend of power and quickness. Davis shows impressive get-off, often exploding off the line and getting into gaps before blockers can react.

The senior linebacker has more than lived up to his nickname, the Freak. He’s been compared to former Alabama linebacker Dylan Moses. He’s made 165 tackles and six sacks in his career for the Tigers. Equally good in the run game and pass game.

Pappoe reads the offensive line well and attacks blocking schemes – has a natural feel for the game. Can attack the edge with speed and has the flexibility to dip low and under the tackle’s reach. Pappoe gets the shout out in the 2022 Senior Bowl mid-season all riser team as he arrives at the receiver at the same time as the ball, giving up few yards after the catch.

Oregon Duck D.J. Johnson made the 2022 Senior Bowl mid-season all riser team due to his pass rush and cover skills. He has established himself as one of the most versatile players in the country in his senior season at Oregon. He previously played tight end for the Ducks.

DJ Johnson is set to start on Dan Lanning’s D this season after playing both TE + EDGE at Oregon. Flashed against Arizona last year and made @BruceFeldmanCFB’s Freaks List thanks to hitting 22.88 mph on the GPS, benching 455 pounds, and pulling 655 sumo. Rising NFL Draft talent. pic.twitter.com/zNxZb3CFD1

Johnson has a good bull rush, but his best attribute is probably his speed off the edge. He has a lot of athleticism for a guy his size, which is probably why he’s in the defensive line position most likely to drop back into coverage. Fluid and quick drop into zone, covers enough ground to be Tampa-2 “MIKE” and knows where the markers are.

Daiyan Henley is still relatively new to the linebacker position, which bodes well for his continued development as a player and offers perspective on just how enticing his instincts are. According to the Associated Press, Daiyan Henley is one of the nation’s three best linebackers at the midway point of the season.

It's Morphin' Time for The Ranger

The most productive defender for the cougars, Henley enters the bye week leading his team with 68 tackles. ESPN’s Mel Kiper Jr. released his latest 2023 NFL draft big board this week, and Henley came in at No. 24 overall. He’s a former wide receiver and defensive back so his ball skills when playing in coverage are considered a strength as well.

Pritchetts role for Auburn went up ever year and was a key starter on cornerback and helped on kick returning on special teams, showing his ability to play multiple positions and help the team out in anywhere he can.

He’s very quick and very confident cover corner that plays bigger than his size when lined up in press coverage, delivering quick, surprisingly powerful punches and using his natural quickness and change-of-direction ability to mirror on underneath routes. Nehemiah Pritchett can get flat-footed but his makeup speed is impressive. He plays the ball as if it was thrown for him.

The fourth-year Illini cornerback sure has come a long way from being an under-recruited, late addition to the Class of 2019. Now he’s one of the nation’s top cornerbacks. Witherspoon was named a Midseason All-American by Pro Football Focus (First Team) and The Athletic (Second Team). Now, he’s part of the 2022 Senior Bowl mid-season all riser team.

The Illini product reads receivers’ routes and anticipates throws at the first down marker. Covers a lot of ground in a hurry when in space. Reads the quarterback’s eyes and sees the routes very quickly, then has straight-line speed to arrive with or just after the ball. Witherspoon shows good awareness when dropping into zone coverage, with good route recognition and the ability to break quickly and cover a lot of ground.

In 2021, as a junior, Ward played in 11 games and contributed on 704 snaps. He chalked up decent 58 tackles, 15 assists, and added 13 stops. In the secondary, Ward forced two pass breakups and notched two interceptions.

Ward flashes good ball skills for a safety. The Tiger product tracks the ball well downfield and has the hands and coordination to come away with interceptions, even while not targeted often. He has the range and cover ability you want out of a post safety.

Safety Daniel Scott is the old man of the Cal defense.  The 2022 season will be his sixth year of college football in Berkeley, and he will turn 24 midway through the season.

“He’s a play-maker, makes quick decisions, and I think that’s what he does best. He has good instincts and when he makes a decision, he can go fast.”

Regardless of age, he looks the part with prototypical size and strength for a strong safety – long arms with a fil led-out frame. Extremely strong with natural power to make punishing hits. He’s a willing and capable hitter in run support and closes fast to make plays against quick screens.

The Georgia Bulldogs senior made the midseason all-riser team for the Senior Bowl. Christopher Smith has 21 total tackles, two interceptions, and three pass deflections this season.

Smith’s an instinctive center fielder who flies around the field, has the tools to make up for a relative lack of size. He’s got a great football IQ and is versatile. He handles assignments as a deep safety, robber, and nickel corner. His downhill trigger is impressive showing the propensity to click and close, driving on anything in front of him with burst and intent.