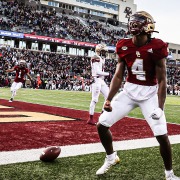 The Senior Bowl just released it’s 2022 midseason all riser team. It consists of offensive and defensive players that have risen two rounds or more on the Senior Bowl board from their Junior year tape grades.

Lets take a look at the offensive prospects.

The Tennessee quarterback is kind of like a mix between Young and Stroud physically. He has Stroud’s arm and size and Young’s athleticism and accuracy. He may win the Heisman. The only major flaw about Hendon Hooker is his age. It brings with it questions of how much upside is left?

The Illini product has the ability to see where holes are going to open up. Brown can twist his hips in between the blockers to squeeze through holes that aren’t there to the naked eye.

Illustrating the importance of patience and pace. If Chase Brown his the line of scrimmage at full speed. This is a nothing play. Instead he slows down and waits for the holes to develop and gains eleven yards. pic.twitter.com/OMq9KIweCV

He’s capable as a receiver, a weapon on swing passes and in the screen game. His stats through seven games:

Senior Luke Schoonmaker has picked up where Michgan TE Erick All left off last year, becoming a key part of the Wolverines’ passing attack and a favorite target of J.J. McCarthy.

Through six games, the 6-foot-6, 250-pound tight end is second on the team in catches (23) and receiving yards (229). Schoonmaker has reliable hands and shows the willingness to make catches in traffic over the middle.

Xavien “Zay” Kevonn Flowers has caught my eye for a while now and he’s been on the senior bowl radar for quite some time. The Eagles product is first or tied for first in the ACC in:

His stock hasn’t only rose in the senior bowl board, but also among NFL boards.

“He’s a smaller receiver, like a [Terry] McLaurin, that type of guy. He can fly. He’s a highlight reel. Probably a second-rounder, might sneak in first if he runs real fast [at the combine].”

Purdue receiver Charlie Jones is coming of age, especially on the mid-season all riser team for the Senior Bowl. Although Jones is more of a possession target than a field stretcher, his fiercely competitive demeanor and run-after-catch ability make him a major threat in the middle of the field.

His play this season is even more impressive when you consider he had 39 career receptions coming into the year. Jones has become the most reliable target for Aidan O’Connell and consistently comes away with the difficult catch during the game’s critical moments. He has 62 catches for 735 yards and 9 touchdowns.

Ole Miss Rebels receiver Jonathan Mingo was graded by Pro Football Focus as the No. 1 wideout in College Football. Mingo plays with a smoothness and balance, and Mingo shows a knack for setting up defensive backs. He’s equally dangerous in catch-and-run situations as he is taking the top off a defense.

Few programs have cranked out big, pretty-looking wideouts like @OleMissFB has in recent years and Jonathan Mingo (@ogmingo1k) is the latest. Former 4-star drops weight well for 220-lber and has huge hands (10 1/2”) to snatch it. #TheDraftStartsInMOBILE™️ pic.twitter.com/tBjKYBJzbh

Mingo transitions quickly from receiver to runner, and he has enough speed to threaten the seam and has a knack for getting open. Through six games, Mingo has amassed 22 receptions, 507 receiving yards, and three touchdowns. He is also now averaging 23.0 yards per reception, which is good for first in the SEC and second in the nation.

The development of Alabama offensive tackle Tyler Steen, a veteran transfer from Vanderbilt, has been critical for the Crimson Tide.

OTs with the highest pass block grades from Week 6

Through six weeks, he has been an anchor for the Crimson Tide at left tackle. He is a very instinctive player and leads by example along the offensive front. It will be interesting to see how he develops as the season progresses.

Proving himself as Florida’s most impactful addition from the transfer portal this past offseason, Right guard O’Cyrus Torrence was recognized for his play twice through six games with the Gators as he lands on Associated Press Midseason All-American team and 2022 Reese’s Senior Bowl Midseason All-Riser Team.

Torrence does a nice job working with teammates to build the pocket, anchoring against bull rushers and displaying good awareness against stunts and twists. As a result, he’s continued his college career-long streak of games without giving up a sack, up to 42 games between his three years at Louisiana and six appearances at Florida.

The Oregon product is little known outside of the college football community but has slowly risen up the ranks. Forsyth is currently on the mid-season watchlist for the Lombardi Award. In the run game, he shows good burst off the line of scrimmage, with the ability to win at the point of attack.

Oregon got blown out against Georgia, but their Center Alex Forsyth looked decent pic.twitter.com/ShnTTeehLr

Forsyth has enough speed and athleticism to move to the second level and land blocks. He’s a rock in the middle of the line as a pass protector, with the heavy hands and strong grip to hold his own against bigger defensive tackles.

Matthew Jones’ name has not been a hot name recently as Ohio State’s high powered offense has names like C.J. Stroud, Marvin Harrison Jr. and Paris Johnson. However, Matthew Jones is a key contributor to keeping C.J. Stroud upright and have one of the best run games in the nation.

Watching Ohio State RT 79 Dawand Jones vs. Michigan State from the weekend and couldn't help but notice RG 55 Matthew Jones getting to the LB. Great reps from both players that are draft eligible. pic.twitter.com/hk14rF73OB

Jones consistently lands blocks at the second level, and Jones finishes strong. As a pass protector, he has violent, heavy hands. Along with a strong initial punch, he has the hand strength to grip and redirect pass rushers.

Last week Volunteers offensive lineman Darnell Wright stood out against Alabama. He had the task playing against an impressive EDGE rusher in Will Anderson Jr.

Tennessee’s Darnell Wright (RT #58) had an impressive performance against Alabama and he showed off some desired power in the run game too. Just bulldozes over the defender and finishes the play, wait for the EZ angle 💪 pic.twitter.com/qytyrRhLHD 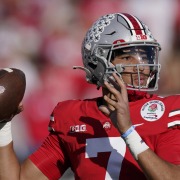 There might be big talent losses in several areas, but the offensive front is loaded with all-stars and veterans, and it should be among the best in the nation at keeping defenses out of the backfield

Coach Luke Fickell’s comments raise some alarms heading into the Razorbacks stadium. He admitted that the Bearcats are not suited to play against a loud SEC home crowd.

"Luke Fickell and the Bearcats, they [will] come to play and they finally get a win versus the SEC."

Cincinnati lost a talented quarterback in Desmond Ridder, can they replace his production week 1 against the Razorbacks?

The biggest key in winning this top 25 matchup in week 1 for the Bearcats is containing Arkansas quarterback K.J. Jefferson.

Razorbacks quarterback K.J. Jefferson was good last year; however can he be special against a good defense in the Cincinnati Bearcats in week 1?

Without a doubt, Jefferson will be the key for the Razorbacks. Furthermore, their running game should help him out. The team led the SEC in rushing.

The passing efficiency should be there against a revamped Cincinnati secondary that lost a slew of NFL talents. With the loss of Treylon Burks to the NFL, coach Pittman wants to see how good receiver Drew Sanders can be.

Linebacker Devin Lloyd might be gone, but former Gator Mohamoud Diabate is a good one to try helping the cause.

Welcome to the first week of #HussamsHotshots

Keep an 👀 on these players during the games today! pic.twitter.com/Z8nHXbVu12

The defensive front will once again be a killer in the backfield, and the tackles are massive human beings who’ll gum up the works.

Head coach Kyle Whittingham brings a veteran, disciplined team against the Gators in Week 1. The Utes are led by standout QB Cam Rising, who threw for 2,493 yards and 20 touchdowns to five interceptions, along with 74 rushes for 499 yards and six touchdowns.

Gainesville’s own Anthony Richardson, with his superb athleticism and arm, is the face of the team as its quarterback. Richardson’s supporting cast is full of returning players.

I’m excited to watch #Florida QB Anthony Richardson starting this weekend vs. Utah. Small sample size, but he has the tools to make this QB class even more interesting. pic.twitter.com/CgEO5cZLqp

Head coach Billy Napier squares off against a top-10 team in Week 1 as his first game as the Gators coach. Napier brings along a few of the good parts from Ragin’ Cajun days; the offensive line really will be a strength, and the running back situation is about as deep as any in the SEC.

The Gators will have to rely on a good rotation on the defensive front and return top NFL draft prospects in Brenton Cox Jr., Gervon Dextor, and Jason Marshall Jr.

Florida’s run defense has to prove it can be night-and-day better than it was last season, as Patrick Toney is in charge of the defense this season.

It’s the debut of new quarterback Tyler Buchner. Notre Dame needs to establish a running game that is much more effective than that in order to support Buchner. Furthermore, stud tight end Michael Mayer will be targeted most of the game due to an injury sustained by wide receiver Avery Davis.

#NotreDame TE Michael Mayer showing his understanding of pre-snap leverage and how to manipulate it with hands and feet.#NFLDraft pic.twitter.com/VeED6YaO1b

Al Golden is the new defensive coordinator for the Fighting Irish. Will he and his secondary hold up against a talented trio of another batch of Buckeye receivers in Jaxson Smith-Njigba, Marvin Harrison Jr., and Emeka Egbuka?

Notre Dame fills the loss of Kyle Hamilton with Northwestern transfer Brandon Joseph, and eyes will be on EDGE rusher Isaiah Foskey who has first round potential in this year’s draft cycle.

Ryan Day’s squad returns Heisman hopeful quarterback C.J. Stroud against a top-5 team in Notre Dame in Week 1 of college football. No one boasts Ohio State’s skill position talent, and it may very well be the reason why they are heavily favored.

The Buckeyes feature three of the top 12 players in the Heisman odds with quarterback C.J. Stroud, running back TreVeyon Henderson, and receiver Jaxon Smith-Njigba.

The Buckeyes defense was its major problem last season against top teams in Alabama, Michigan, and Oregon. Ryan Day brought in Jim Knowles from Oklahoma State to shore up the run defense.

The linebacker play from Steele Chambers and Tommy Eichenberg will come into focus to stop the Fighting Irish ground attack.