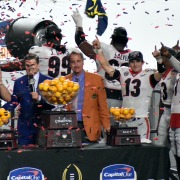 The No. 3 Georgia Bulldogs defeated the No. 2 Michigan Wolverines 34-11 in the Orange Bowl on New Year’s Eve in Miami to advance to the National Championship Game. Here are the best sights of the game from our photographer Tony Capobianco. 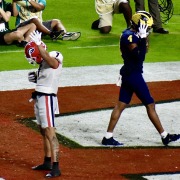 Michigan waited years for this opportunity.

When Jim Harbaugh was pried from the NFL to return to his alma mater as the head coach, this was supposed to be in the Wolverines future.

Which makes it a devastating disappointment to come all this way in year seven of the Harbaugh era, only for it to end in a 34-11 blowout against Georgia in the Orange Bowl.

“It’s very disappointing right now,” Michigan quarterback Cade McNamara said. “ I mean, we have everything we got, and we got beat tonight.”

Harbaugh chose to look at the 2021 season as a whole, a season that resulted in the Wolverines’ first Big Ten title since 2004, rather than focus on how the year ended.

“It was a great season,” Harbaugh said. “To me, it’s one of the best seasons in Michigan football history.”

It was clear where the Orange Bowl was going after Georgia jumped to a 14-0 lead in the first quarter with touchdowns coming from two different passers. The first drive was highlighted by a pair of passes from quarterback Stetson Bennett IV to tight end Brock Bowers, one for 35 yards to get to the red zone and another for nine yards for the score. The second drive was a throw on the run from running back Kenny McIntosh to receiver Adonai Mitchell for an 18-yard score.

Every Georgia offensive drive in the first half ended with either a field goal or a touchdown.

“They did a very good job early in the game, first half especially, of extending drives,” Harbaugh said. “They were able to bleed out yards on the perimeter with some of the bubbles and swing routes, then hit the big play.”

McNamera threw for 106 yards for the game, while Bennett threw for 105 yards on just his three touchdown passes.

Freshman quarterback J.J. McCarthy came in later in the second half and threw for 131 yards including a 35-yard touchdown pass to Andrel Anthony in the fourth quarter. He also ran for 24 yards on four carries.

“We know we have two great quarterbacks,” Harbaugh said, “We make no apologies for that. I felt we just weren’t — the protection just wasn’t as good as it needed to be, and J.J. gave us more of a chance to escape it, avoid it and run because that was the reason we made the switch.”

Even though this was the end result of the seventh season of the Harbaugh era, the theme of this year is that this is just the start of things to come for the Wolverines.

”We climbed mountains this season that no one thought we could,” Michigan defensive end Aidan Hutchinson said. “We did some things that nobody expected this Michigan team to do. I think we set the standard for the future of Michigan football and we really helped this program tremendously for the future.”

While this marks the end for Hutchinson, who is expected to be the top pick of the NFL Draft, and senior running back Hassan Haskins, who scored 20 rushing touchdowns this season, the future looks bright for those who return to Ann Arbor for the next season. A handful of young players, including McCarthy stood on the field to watch Georgia celebrate with confetti filling the stage.

“All those young guys, they got this scar tissue now, being in the Playoffs, losing having to feel this,” Hutchinson said. “I know they’re going to bounce back next year and give ‘em hell.” 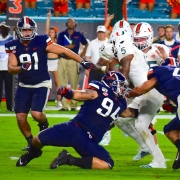 It’s always special whenever a college football player can finish the season playing in a bowl game near or at his hometown. Such is the case for Virginia defensive end Mandy Alonso, who returns to Miami to take on the Florida Gators in the Orange Bowl.

“I feel like I’m back at home,” said Alonso, who also mentioned that he got to see his family upon arriving from Virginia. “It’s amazing because I grew up watching the Orange Bowl every year. For it to be such a big bowl game and like my friends and family being able to come out because I got a bunch of tickets, it’s just really special.”

Alonso played defensive tackle, offensive line and long snapper at Gulliver Prep for head coach Earl Sims, who also played at Virginia from 1998-2001 as a linebacker. He was named first-team All-Dade County in 2016 after collecting 52 tackles, nine sacks and eight fumbles as a senior.

Alonso came to Virginia as a three-star recruit despite the Cavaliers coming off of a 2-10 season in 2016. Since his arrival, UVA has played in a bowl game in each of his three years.

Hard Rock Stadium is a special place for Alonso. He got his first career sack during his freshman year against the Miami Hurricanes in 2017 and got another one this year. His Cavaliers lost both matchups but there’s hope that his luck changes against Florida. Virginia is a win away from finishing the season with 10 wins for the first time since 1989.

“It would mean the world for everybody because like just coming from 2-10 a few years ago, this is a huge jump,” Alonso said. “To be on such a big-time bowl game that this stage is like set perfectly for us to rebuild this program.”

The Cavaliers haven’t played a game in over 20 days. Their previous game resulted in a 62-17 drubbing by No. 3 Clemson in the ACC Championship Game. Such a layoff could result in over preparation which is a concern with both teams leading up to bowl games.

“You could get like — more like you’ll be tired of watching it, like you’ve got to take like a break,” Alonso said. “But I guess we’ve had so much time that we’ve got to like space it out and like we haven’t been like, oh, my God, I don’t want to watch film. We’ve been locked in. Coach talks about flipping the switch from bowl game and then like game time.”

Virginia head coach Bronco Mendenhall is preached “unbroken growth” all season long. The question after Monday’s game is whether that holds true after the result.

“Like in the big picture, in the game, if we lose, it’ll be sad, but we got to the Orange Bowl,” Alonso said. “It’s still a big accomplishment, but we don’t want to settle for just that accomplishment, just being here. We want to go win it.”