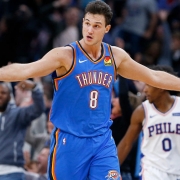 Paul Millsap and Danilo Gallinari are two guys that many have talked about possibly signing with Miami. Obviously both have their own strengths with what they could bring to this current Heat team. But who would be more effective?

For starters, I think it’s pretty obvious what Paul Millsap would bring to this team. He’s a veteran guy that knows how to play a role wherever he arrives.

He’s fairly capable of knocking down the three ball, and has the ability to go on big scoring spurts. That’s what he did in the third quarter of game five against the Los Angeles Clippers, when he scored 14 points in the third.

He also brings a good defensive presence at that position. Since Bam Adebayo is the quick and lengthy big, it’s clear that Paul can take some bigger match-ups with his wide frame.

Paul was asked to play a different type of role in Denver this season. He was a guy who was supposed to do the dirty work for them in a decreased amount of minutes. This obviously didn’t work out bad for them, but it’s just something to take note of.

As much of a presence that I think he could bring to this team, it just doesn’t compare to that of Danilo Gallinari, especially since Paul will be turning 36 years old in a couple months.

Before going into how Gallinari could help this Heat team, the only downfall with him over Paul is that he’s not as good of a defender. He can still hold his own against guys his size, but he struggles on switches.

But when you are sharing the floor with Bam Adebayo that shouldn’t be an issue.

The first thing that should be recognized with Danilo is his outstanding shooting abilities. He shot 40% from beyond the arc this season attempting 7 threes a game. But he won’t be getting targeted as much as a shooter if he’s sharing the court with one of the best shooters in the league, Duncan Robinson. And this duo of Danilo and Duncan could be something to watch, since Danilo has shown to be pretty good at dribble hand-offs.

He also plays much better when he’s not the number one scoring option on the floor, and with the weapons that Miami has on this roster, that shouldn’t be an issue.

Shooting isn’t his only elite attribute, since it’s known he is an efficient scorer at all three levels. He’s very capable of putting the ball on the floor to try and make a play.

It would be interesting to see Bam and him navigating the offense, since both of them are such craft play-makers.

There are so many aspects to Danilo’s game that fits Miami’s system, that I truly believe it’s a perfect match.

Although Miami needs a true big who can grab boards and protect the rim, it’ll be hard to say no to a guy like Danilo.

Paul Millsap, on the other hand, will be interesting to see how Miami perceives him at 36.

But either way, it just further proves that Miami has a lot of options.