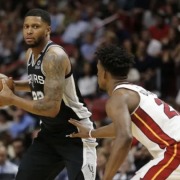 After diving into all of the primary off-season options for the Miami Heat, I’m continuing to go into some of the small ball fours that could possibly be plugged in next to Bam Adebayo in the front-court. There are plenty on the market this off-season, but this specific guy basically forces me into a different writing style.

Instead of focusing on all of Rudy Gay’s strengths, I’m just going to touch on the one offensive ability that sets him apart from the rest.

It’s pretty much known that when the Heat like a certain guy, they somehow find themselves back in contention for that guy down the line. And Gay falls right under that category.

Miami ended up with Trevor Ariza at the deadline, while they had their eyes on Gay up to that point. And here they are with yet another opportunity.

So, let’s get right into why he is so much different than the other options in free agency…

To be very clear, although a three-level scorer should be a focal point for the Heat this off-season, it just doesn’t seem possible. Some guys like Brandon Ingram have their name being thrown around a bit, but I would guess that Miami isn’t relying on that option.

That leaves them focusing on the true priority in free agency: a point guard. The money going to that position most likely means another cheap front-court pairing will be the outcome, but what if that spot can be a role player who can score at three levels?

Among some of the other options, there are plenty of two level scorers. Guys like Jeff Green are great beyond the arc and in the mid-range, while others like JaMychal Green are most comfortable from three and at the rim.

There’s always that one area that waves a red flag, but that’s usually what you get with these type of small power forwards. One thing they all have in common though is floor spacing, and Gay clearly provides that.

He shot 40% on catch and shoot threes this past, but that doesn’t mean he is one of those stiff one-dimensional spot-up threats. He can move pretty well, and that type of elusive movement leads to all of his catch and shoot looks in the offense. In a Miami Heat motion offense, plenty of pin-downs and off-ball screens will be utilized to get him free, but that’s not what sets him apart from the others on the market….

The mid-range pull-up numbers took a bit of a dip this past season, but some of that has to do with the attempts increasing by a good amount. After shooting 47% from that spot of the floor a year ago, it dropped down to 40% this past season.

Now, even with that slight fall-off, I’m still confident in that ability for him since he has one of those high arching shots that combine with great length on the fade, which makes for a pretty deadly mid-range game for his size.

Looking at the clip above, those two dribbles into a baseline pull-up may look simple, but that could be the difference maker in a Heat offense. They’ve had different front-court trials over the past two years that all played differently, and Gay would do the same thing for next year’s Heat team.

When that spot is filled with guys that live or die by the three, off nights can alter an entire offensive scheme. But a guy that is capable of mixing in that type of play-style can truly bend a defense, which is important for somebody that wouldn’t be a primary player on the roster.

Some of the other guys out there also have a three ball and a mid-range game, so what else is there with Gay?

Finally, the completion of the three-levels ends with a capable attacking game, and it adds some physicality. If Miami is looking for a four that can get to the rim a bit, it has to be more of a strong and physical one than a finesse driver.

Gay has shown to be pretty strong on his drives over the years, but once again, this topic is far from being complicated. His attacking doesn’t have to be super versatile or out of control, it just has to be a possibility.

Looking at the clip above, they’re setting him a screen to get him going downhill which gets fumbled a bit. He recovers and turns the corner on the baseline for the dunk. That’s it. If this is the type of route they go, a guy that can just turn the corner is all they need.

As much as I feel that more of a paint presence could be the route they go with the need of rebounding, a player that has been on their radar for some time wouldn’t seem like a shocking option. With Miami’s need of half-court scoring, adding some more of that next to Jimmy Butler, Bam Adebayo, Duncan Robinson, and a point guard acquisition can really change the way the offense looks.

Not only in a regular season setting, but a playoff setting. Adding a veteran point guard and Rudy Gay should signal what the Heat are about this upcoming season: trying to win now.