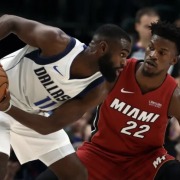 After it was reported by Greg Sylvander that Tim Hardaway Jr is intrigued by the idea of landing in Miami and joining the Heat, it presents an interesting question: should the Heat share the same feelings?

Well, walking into the Heat’s arena and looking up at the ceiling may give you a certain answer, since his father, Tim Hardaway Sr, has his jersey retired in the rafters. But clearly, this front office is no longer in a sentimental state, they’re in a win at all costs state.

Although I’m going to dive into Hardaway Jr’s game in this piece, it should be noted that combining the money he’s looking for and the players that Miami needs, it just doesn’t seem to be something that the Heat would be focusing on. However, if other top options fall through, I could definitely see them checking back, but by then, I believe it will be too late.

He’s coming off an outstanding offensive season, as well as a progressive playoff showing. But would his strengths that he displayed be enough to elevate the current state of the Heat? Well, let’s hop right into it here…

When people give him a label, they usually start with the term “streaky” shooter. The thing about a lot of streaky shooters is that “3 and D” seems to come up a lot when discussing them.

The difference is that his defense is much worse than the typical “3 and D” guy, while his three ball is much better than the average guy with that build.

It’s not just that the Heat need two-way players moving forward, but they need guys who can at least survive on both ends. When the front office and coaching staff come together, it feels like there will be a general agreement that’s the way they will operate moving forward.

Aside from that point, Hardaway Jr’s offensive game almost makes you forget about that other stuff. He may be up and down with his shooting at times, but that was flattened out a bit more this past season. And the “ups” were much higher than they’ve been in quite some time.

The part that makes this a bit more intriguing is that his offensive game isn’t one dimensional. He’s not a guy that’s just shooting off the catch every night, since his on-ball stuff seems much smoother when watching him play.

When looking at the first clip above, you see him awaiting the screener to dive before making his move. A crossover left before flowing right into his high arching jumper, and it leads to an and-1 triple.

Although that’s probably his best ability, playing next to Luka Doncic means that spot-up three will become your best friend even if you don’t want it to. He shot 41% on catch and shoot threes this past season, which is where 40% of his shot attempts came from.

In a Heat offense, the frequency would probably differ a bit, since they’d be looking to him as more than a spot-up guy. As I’ve listed in the past, the top three priorities should be a half-court scorer, point guard, and front-court pairing. If they circle back to a guy like Hardaway Jr, they have to believe he can give you that type of production on the ball at a much higher rate.

The pull-up three numbers definitely don’t look as good as it does when you’re watching, due to him shooting 35% this past season. But it still seems to be one of his biggest strengths, as well as his go-to that opens everything else up.

There are a ton of transition killers in the NBA, but none do it like Hardaway Jr. Running at full speed before stopping and popping on the perimeter like it’s nothing.

That one shot type fully explains why the outside shooting looks so pure and fluid for him. Just take a look at the clip above, and I’m sure we will agree what stands out most from that shot.

He’s a rhythm shooter, and that shot gets him into a comfortable motion. What is that motion exactly? His lift.

Go back and watch the clip again, focusing on the air time that he gets on his jumper. This can be evaluated from a couple different standpoints, but I’ll focus on the main two.

From a positive side of things, it’s a shot that is hard to guard to say the least. Shooting over the top of guys who are on their heels is a pretty interesting skill. It is why he finds himself in the high PnR so often, since he gets a head of steam while his defender trots backward, maximizing his best ability.

Now, we can also look at that shot above in a negative manner. He’s labeled as a hot and cold type of shooter, but can that be talked about further?

Aside from seeing the ball go in the basket a few times leading to a ton of confidence and rhythm, there’s more to it. Yes, that huge lift on that shot may translate to hard-to-guard buckets, but that may be what alters his shooting consistency.

When your lower body movements are constantly being changed depending on the shot type, it forces things to become unorthodox. It’s why Stephen Curry is such a special shooter, since it doesn’t matter if he’s shooting a mid-range pull-up or a half-court heave, the process of the jumper looks the same.

To finalize that rant, these small things that come up in his game may be enough to hold Miami from pursuing him. While certain parts of his game have been cleaned up with major improvements, I’m just not sure if it’s enough of a sway for Miami to fully go after him.

What Else is in the Offensive Bag?

The phrase “one dimensional” comes up at times when discussing his lack of defense, but it definitely wouldn’t be used to discredit his offense. He’s just one of those pure bucket-getters that I always discuss, mostly due to him switching it up when he has it going from deep.

The mid-range comes into play here, but I don’t believe it’s utilized enough for him when he has on-ball duties. In the play above, we see a normal occurrence for Hardaway Jr in the half-court, where he faces up to the basket and explodes.

Those transition pull-up shenanigans allow him to be so impressive in this spot of the floor. He rises up effortlessly on the baseline and knocks down the jumper. He shot 41% from that area of the floor, but the attempts was the bigger issue.

Only shooting 2 mid-range pull-ups per game seems to be something that would change in a Heat offense. It’s the thing I’ve talked about with Duncan Robinson, who is not even close to being an on-ball guy. If he’s going to be in that type of role, diversity would be key, and I believe he’s more than capable of doing just that.

In all of my pieces of diving into a possible acquisition, I always highlight a certain offensive set that Miami runs, and compare it to where the player fits in. Hardaway Jr could probably be placed into some of those off-ball screen actions for good looks off the catch, but as I’ve touched on, the Heat would be looking to expand that.

The double drag in the clip above is where I’d see him slotting into the Heat’s scheme. The interesting thing about him here is that he just puts a ton of stress on the defense, especially as he comes off the screen for a possible three.

A lot of the time he can force a favorable switch in these sets, which leads to him backpedaling out for a reset, leading to some of those isolation buckets that I touched on earlier.

But no switch is forced on this play, as he methodically uses the defender to his advantage. A couple shoulder bumps are utilized before he gets into his fade-away at the free throw line for a tough bucket.

Why is this important? Well, it wouldn’t just be about the perimeter shooting for him in a Heat uniform. Although I’ve pointed out a ton of reasons why it just doesn’t seem likely, the interest is obviously there on Hardaway Jr’s side and it’s still an option for the Heat to come back to.

Do I believe it will actually get to that point? Honestly, probably not due to the team’s point guard deficiency leaving them with a clear target in free agency. On a championship roster, Hardaway Jr is a great surrounding piece, but it just doesn’t seem possible to have him as a third option next to two guys who aren’t primary scorers. 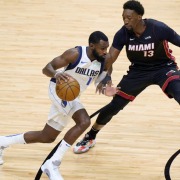 As the beginning of free agency gets closer and closer, I can report that Tim Hardaway Jr is intrigued by the idea of landing in Miami and would love to join the Heat, a league source tells Five Reasons. However, the timing of free agency and contract details are perceived as likely challenges by Hardaway and his camp, according to the same sources who spoke on the condition of anonymity.

After knocking down 207 total threes this past season, which is his career high, it’s obvious that he’s in line for a decent sized pay-day. The specifics of that may not be clear at this exact moment, but it is clear that Miami could use his type of scoring ability next to Jimmy Butler and Bam Adebayo.

The Miami Heat simply have certain priorities this off-season, including a possible point guard and front-court pairing, but if some of those things fizzle out, it’s a great fall-back plan.

How much does he elevate the current Heat roster? Well, that’s a different story, since it matters what you’re losing out on to fulfill the signing of Hardaway Jr, but there’s no doubt it improves the team on the offensive end of the floor.

Defensively may be a different story, after Miami has gone through a long period of time with one-way guards, but there is a different element to this particular acquisition. His track record showcases two things that make up for that: reliability and consistency.

When looking back over his career, he hasn’t missed a lot of time, considering he only missed two games this season and four games the year before. Combine that with the on-court consistency, since even though a streaky shooter becomes the label at times, he’s seemed to line himself up well following this recent playoff run.

Once again, there are certain needs for this Heat team as they head into the off-season, while it feels like their priorities have stayed the same. But if Hardaway Jr’s interest in Miami continues, as a couple strike-outs occur in the process, there’s a chance he could find himself in a very familiar arena.