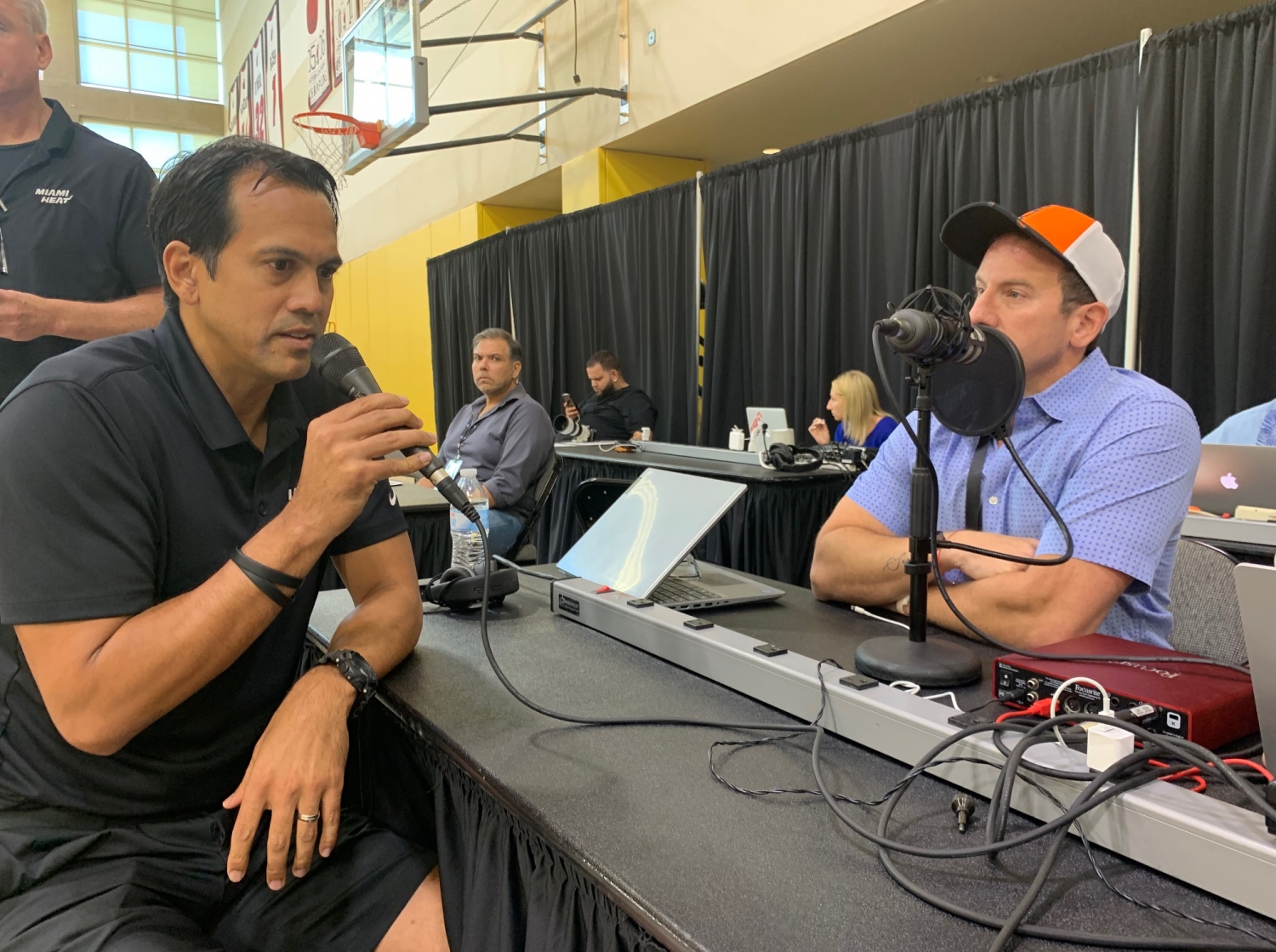 “Is that a trick question?”

It wasn’t. Promise. But it was an unusual one. It wasn’t one Erik Spoelstra was expecting to hear. It wasn’t about rotations or expectations. It was about him. He detests questions about him. They typically make him fidget and fret. And he isn’t usually much of an enthusiast about this setting either, a radio or podcast interview, one that isn’t so scripted, one that isn’t bound by the usual time constraints of the conclusion of a practice or the commencement of a game.

The question came from an exchange at Miami Heat media day as Spoelstra sat down with the Five on the Floor podcast for a few minutes:

“Twenty-three years? Is it 23 years with this organization? Twenty-four?”

“But was there ever a point where, you’re like, OK, I’ve done this long enough? You’re the second longest tenured coach in the league, I think you’re four days ahead of Rick (Carlisle) in terms of being with one team….”

“Is that a trick question?”

“No, because I know how passionate you are about it, but anybody, a quarter-century in one place…”

Instead, he says he keeps thinking of how fortunate he is, and how prescient Micky Arison and Pat Riley were, when Spoelstra was but a video coordinator, not even knowing a ladder would be dropped at his feet for him to climb. How they created this culture he now calls himself a caretaker of: “I take that responsibility with great, great reflection.” How they set the stage for parades. How the stability has put the organization in position for another rapid rise.

But here’s what I keep thinking:

And not necessarily the one you know. I’ve always observed two Erik Spoelstras. There’s the one in front of the cameras, with the calculated clichés and half-clever catchphrases, offering just enough that reporters can use to get through the painfully awkward process without giving much away. The one who sounds a little like Pat Riley lite; I used to say that Spoelstra sometimes sounded like he was trying to slide into Riley’s old Armanis, only without the accompanying flashes of anger. That Spoelstra is calculated and occasionally cold.

Then there’s the Spoelstra on the side.

That person is warmer, the one who sends heartfelt messages to reporters who welcome a child or, in the worst case, lose one. My former colleague will never forget what Spoelstra did last year when that happened to him. That person is also infinitely more honest. And coarser. He doesn’t trash players. But he will give you more perspective, often in much more colorful language. That Spoelstra is real.

And that’s the Spoelstra we saw here Monday.

The one appearing entirely comfortable in his skin. The one who knows who he is now. The one who believes strongly in what his team can be. Some would say it’s the security of the four-year contract. Don’t think so. Security is not something he lacked anyway. If the Heat were ever silly enough to send him packing, he would be scooped up within seconds, probably with a bigger title in addition to coaching. Who knows, maybe someday Seattle will finally get a team, not far from his precious Portland. Maybe Dwyane Wade will buy a piece of that franchise, as Wade has often suggested. Maybe they’ll need a president of basketball operations. Maybe.

But there no maybes about this:

Spoelstra is energized in a way he hasn’t been.

If you speak to people inside the organization, people he has known forever, people he likes and who like him, they will tell you he was grumpier than usual the past couple of seasons. That he resisted the in-house promotional work more than usual. That he wasn’t smiling as much. That he wasn’t…. himself.

So this seemed to be worth another question:

“Just an observation. You seem really energized, about this team, about this season. Why?”

“I’m not sure. (Laughs). I’ve had a couple of people mention that to me in the last few weeks. But mention it in a different way. I felt like training camp was already here for me last month. I don’t know. It just feels, and I mentioned it in the presser, it just feels like an appropriate time to turn the page, and start a new chapter of Miami Heat life. With a new Miami Heat team. Even though we do have a lot of familiar faces back. We have enough influx of new faces, new energy, new opportunities with the way the league is right now. It just feels different than it has in the past. It doesn’t take anything away from our approach in the previous years at all.”

So, why, in more detail?

Here’s a stab at that.

He has a roster that makes sense, after trying to manage a muddled mess of similar skill sets with a screwed up salary scale the past two seasons. He isn’t saddled with competing organizational aims, where cases could be made to play certain players over more deserving ones to create value, where farewell tours for a legend and his fans sometimes took precedence over an uninhibited playoff push. He has a star who wants to be there, who “fits” the Heat way — his way — on and off the floor.; Spoelstra wants someone to challenge and who challenges him, and Jimmy Butler, his frequent dinner partner of late, is made to order for that. He has no clear problem children on the roster, least of all one making a max contract.

There’s no point in taking potshots at the departed Hassan Whiteside, who was introduced in Portland on Monday, and Spoelstra didn’t directly. But it did raise media members’ ungroomed eyebrows when Spoelstra noted, in reference to Butler, that the “most important relationship in the organization” is “between the highest-paid player and the coach”; Spoelstra never mentions salaries, and he could have said “best player,” but Whiteside, always moping, wasn’t really ever that. He also repeatedly referenced how Bam Adebayo, Whiteside’s ostensible replacement as the starting center, only cares about enhancing his teammates; Spoelstra never had an issue, incidentally, with whether Whiteside worked hard but, rather, whether Whiteside worked with.

So here we are.

He is himself again. Only, more energized. Scarred from the past couple of years, but smarter. Secure, but just enough on edge, always.

Ethan J. Skolnick, who has covered the Miami Heat since 1996, will be writing a weekly (or more) column exclusively for FiveReasonsSports.com and Heat Maven called Season Ticket.