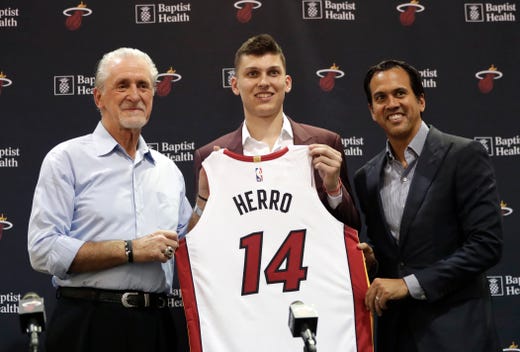 We’ve finally reached the end of a six month regular season race.  But before we move into the postseason, we wanted to look back at our preseason predictions and look forward to the upcoming regular season awards.

Prior to the start of the season, fourteen Five Reasons contributors made their predictions and looking back…we were wrong!  None of our “experts” predicted the Miami Heat to finish as the #1 seed.  In fact, only Tony Schwartz, Royal A. Shepherd, and Mateo Mayorga had the “guts” to pick Miami as the #2 seed.  To no surprise of Before Floor viewers, Ricky J. Marc had Miami the lowest as a #5 seed!

Leading our contributors was Kendale who proved he’s “one of them ones” when it comes to predictions.  He correctly forecast the seeds of Boston, Philadelphia, Chicago, and Phoenix.  Only Ricky, Brady Hawk, Gadiel Cartagena, Toine, and myself had two correct picks in our seeding predictions.

Were there ANY good predictions by this crew of misfit contributors?  Everyone had some combination of Miami, Milwaukee and Brooklyn in the East Finals which looks very promising.  Brady Hawk predicted a battle of the #1 seeds with the Suns beating the Heat in the Finals.  Eight of our contributors correctly assumed the Kings would be the Kings and be the first team to fire their coach this season when they relieved Luke Walton of his duties.  The panel also correctly named many of the big names who would be traded this season – including Ben Simmons, CJ McCollum, and Domantas Sabonis.

In the final week of the season, 11 Five Reasons contributors and 160 listeners cast their votes for the postseason awards.

No surprises in the top three for the MVP race, but our contributors gave Giannis more 1st place votes than Jokic or Embiid.  Jokic took a majority of the 2nd place votes to fall just two points shy of the MVP.  Five Reasons experts confirmed Embiid’s belief that “the media hates me” by voting him 3rd in the poll.

In our contributors’ vote, Scottie Barnes narrowly edged out Evan Mobley for the Rookie of the Year.  Cade Cunningham finished third, and both Herb Jones and Jalen Green received one vote each.

In no surprise, the contributors’ vote picked Bam Adebayo as their Defensive Player of the Year.  The vote is being investigated after one contributor managed to vote Bam for 1st, 2nd, and 3rd on their ballot, but nonetheless, it was a landslide victory over Marcus Smart.  In similar fashion, Bam dominated the fan vote with 151 of the 160 1st place votes.

In our contributors’ vote, Dejounte Murray (32) edged out Ja Morant (28) despite Ja receiving the most 1st place votes.  With Morant only appearing on six of the ballots, it appears that some may have discounted the former #2 pick and Rookie of the Year in their “most improved” criteria.  However, on the fan ballot Ja Morant (330 points) won the award and led with 52 1st place votes.  Darius Garland (280) finished second, Tyler Herro (236) third, and Dejounte Murray (222) fourth overall.

In no surprise, Tyler Herro dominated the Sixth Man of the Year vote on both ballots.  Tyler received 99.4% of the 1st place fan votes – and we are currently investigating the single vote that was cast for Kevin Love that kept the award from being unanimous.  On the contributors’ ballot, Tyler received all 11 1st place votes.  Similar to the DPOY vote, he also managed to receive 1st, 2nd, and 3rd place votes from one of our contributors – but we will allow it when Tyler is such an overwhelming favorite.

In the fan ballot, Erik Spoelstra (689 points) received 108 first place votes as he cruised to his first Coach of the Year award, followed by Monty Williams (417 points) and Taylor Jenkins (205 points).  On the contributors ballot, there was a tie between Spoelstra and Williams.  After reviewing the by-laws, the 7th tie-breaker was Greg Sylvander’s vote powered by #HeatCulture to give Spo the edge.

The Miami Dolphins are back to having fun