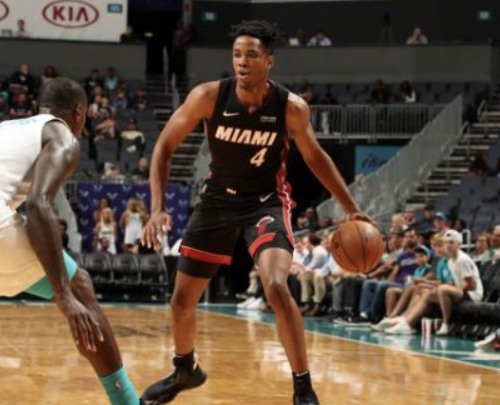 KZ Okpala’s major motion picture with the Miami Heat is just about to go into year 2, but it feels like we’re still waiting for the opening credits. The fans feel like they want to see a closer look and better understand the case at hand. When will they get to see the story truly unfold? Answers seem to get hazier as the fog of a weird season continues to make this harder to see.

Taken with the 32nd pick in the 2nd round of the 2019 NBA Draft after a solid sophomore showing with Stanford, Okpala was seen as a reach by many experts. But the Miami Heat were in love with him and traded multiple future second-round picks to select the versatile Forward. Reports would later come out that they had him right after Tyler Herro in their overall draft board. The team was seemingly in love with the young and raw talent. His athleticism and length seemed to have caught the eyes of the scouting team. They saw so much potential that could eventually be unearthed by the famous Miami Heat developmental staff. We’re now into KZ’s second year as a pro athlete, and he has yet to etch a role out for the team that took a chance on him. While that’s understandable for a player taken in the 32nd slot, something still seems to not sit right with Heat fans. It’s hard to imagine why Okpala hasn’t been given much of an opportunity in a year where you need youth and seem to be down at least four players every other night.

Maybe it’s just the usual impatience from fans? They want to see the shiny new toy that Erik Spoelstra can unleash on the unsuspecting basketball universe. And you know just the type of magic the Coach can make happen out of seemingly nothing at his dispersal. Yet, the “shiny new toy” remains kept in the sealed package despite what seems to have been a more than willing taker. It could always be a case that has to do with more of what we’re not seeing. After all, Coach Spoelstra and the organization have always been big on showing in practices just how bad you want that playing time. Even with all that, there are still minutes there up for grabs because the choices aren’t very plentiful at the moment. You can’t blame the fanbase for wanting to see what the team saw when they took somewhat of a gamble when they selected him. The team kept lauding him as a first-round pick that they stole right from under the league’s noses. Especially after the same fans just finished watching Duncan Robinson and Kendrick Nunn start almost all of last season despite them being an undrafted second-year player and a rookie.

Granted, those guys are a lot older, but NBA experience isn’t easy, no matter the age. But Tyler Herro and Precious Achiuwa seem to have had quite an easy time when getting at least constant bench minutes as rookies. To go even further back at examples like Justise Winslow and Josh Richardson, who both found roles so early in their careers despite one of them spending so much time in the D-League (now G-League). KZ himself spent all of last year in the G-League developing his game almost the same way Richardson did. So shouldn’t a player who was touted as being almost equal to Herro prospect-wise be getting a much longer leash? Or it could be that Okpala was just hurt the most by not having a Summer League or regular Training Camp to work out even more of the rawness he still has. There are so many factors that fans keep going through in their heads that’ll eventually have them spinning out of control.

So far, it’s been an endless cycle of getting a taste of what Okpala could be, followed by a quick DNP the next day. And those tastes have left the fanbase craving more. Like an excellent teaser trailer of a crowdfunded movie, you want to see the full version of what so many people invested in. It’s always been on the players to force the coaching staff’s hands by showing them what they can do when they get opportunities. It’s hard to argue he hasn’t done as such. He’s shown you glimpses at that player you know he can become. He’s improved his shot, expanded his dribbling ability, and gotten so much stronger. The defensive skills have been the most promising, and that’s something “Heat Culture” has always preached. Okpala has made his mistakes here and there, but every player needs to have their growing pains sooner or later. Especially someone you’ve indicated will be a part of your future.

There is the argument that the team needs win-now players to see the floor to counterbalance the amount of youth getting such critical roles. Hence why you’ve seen players like Andre Iguodala and Moe Harkless continue getting those minutes instead. Even with that, I still think it wouldn’t hurt to showcase a guy like KZ in a year where it’s almost like a preseason half of the time. The worst case is that you’re taking minutes away from guys who will become more critical for possible trade bait or future playoff minutes. It’s a sort of fork in the road that Miami finds themselves in where they’re looking at both the win-now and future. There’s also the argument that the staff is trying to protect him from any deal he could be attached to in the future. While I can see where that’s coming from to an extent, I don’t think the Heat staff operates in that sort of manner.

It could very well be a case that he isn’t ready. And that may be the hardest pill to swallow for fans and even the staff itself. He may still be too raw and immature (basketball-wise) to have out there. It’s a difficult thing to let sink in because of how much you’ve been hearing about him. The fans have been fed this idea that he’s such an invaluable commodity of the future. Like a folk story, everything they’ve heard seems to look better in their heads than the actual reality. And fans don’t want their reality to crumble before them. But if he continues to play well in the minutes he gets, they’ll be right to keep asking questions.

For Okpala, one thing is for sure in that he’s going to keep trying every single time he’s given a chance. Miami always drafts guys who are willing to become the best versions of themselves. If the minutes continue to be uneven and uncertain, he’ll be there waiting to seize the opportunities, as slim as they may be. Even if his current role is slightly murky, he’ll make sure his future is bright in some capacity. He’s in the right environment and with the right people to do so. Soon he won’t be a mystery, but a thriller that you’ll need to see the endgame of. Hopefully, the ending doesn’t disappoint because you have all the right cast and crew on hand.