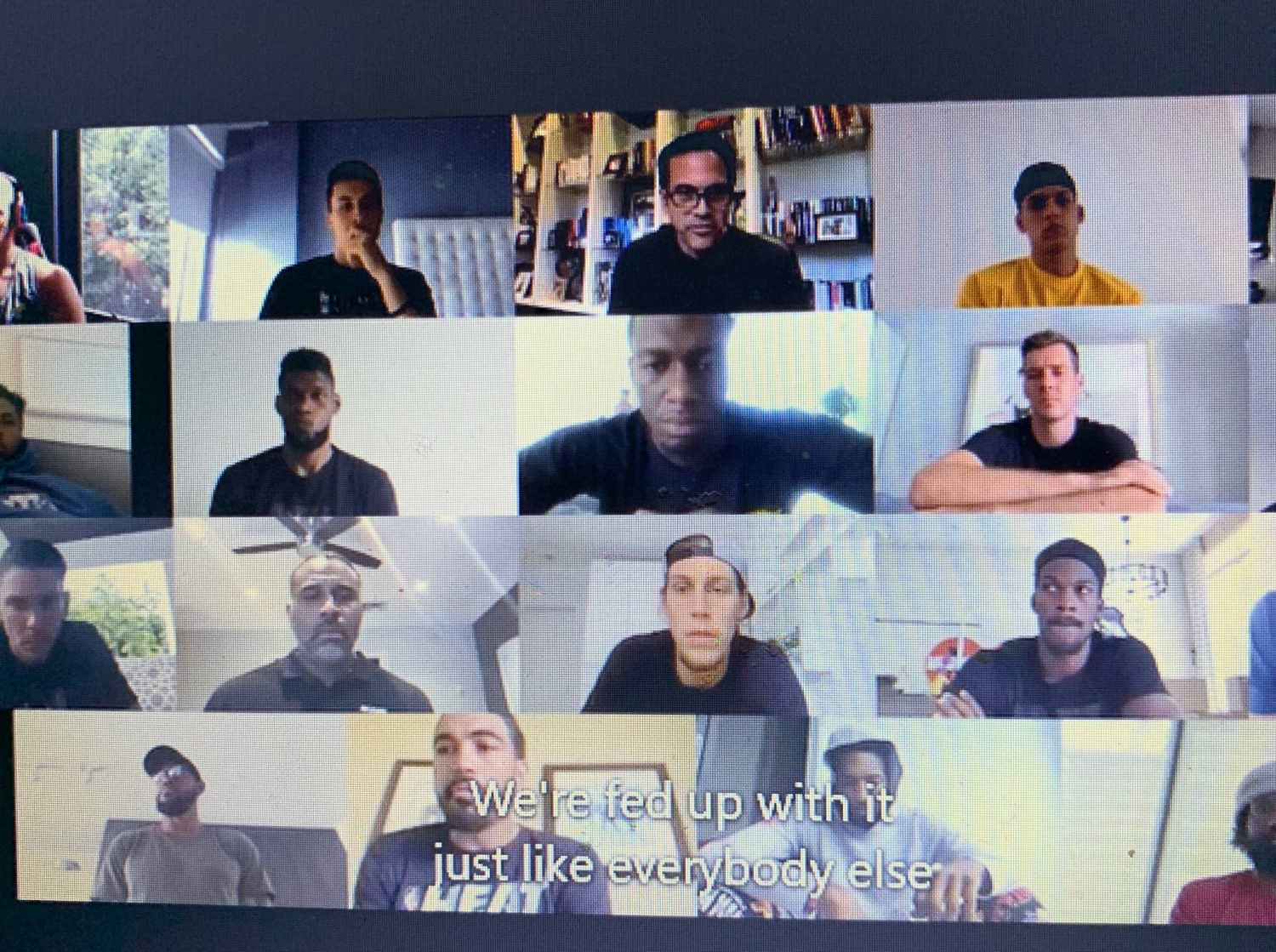 June 19, 2020 wasn’t just another commemorative celebration of the emancipation of the last Confederate slaves in the United States.

This particular Juneteenth hits a little bit differently than the ones in previous years. Jubilant remembrance and observance gave way to passionate and in-depth conversations about systemic racism in this country.  Helping lead the way in such discussions was the Miami Heat , as they hosted a virtual town  hall meeting.

“In many ways, this town hall is like our virtual team peaceful protest and we are protesting against systemic racism. Against the social injustices and inequalities , and the cases of police brutality against the Black community that we see far too often,”  says Heat coach Erik Spoelstra. “ We’re fed up with it, just like everyone else and we want to see change.”

Here are some takeaways for the hour-long candid event……

INTERRUPTING THE PATTERN OF HATE BEGINS AT HOME

When asked to share his most memorable brush with racism, All-Star guard Jimmy Butler recalled a moment when he was 16 years old. Butler and his brother was walking out of a Walmart  when a man and a boy who appeared to be no older than six saw the two and the boy said to his father ‘those are the n-words’ you were talking about.

Butler’s moment was another example of racism being taught.

“The kid didn’t know any better,” Butler said, “The first thing that popped into my head is that you (the father) taught him that. There are things that you teach kids, and you choose to teach your kid how to hate.”

The Miami Heat town hall under way. The team and staff together on zoom to discuss systemic racism and what the orginazation and players can do to help. pic.twitter.com/DECGFa7ZnT

Meyers Leonard admitted that sometimes he feels uneasy as a non-Black player in the current climate of this country and how he sees his teammates treated. Leonard says that while he was raised to love all people and to differientate between right and wrong, he admits that he can’t fully relate to what his teammates are going through because of his race.

Leonard recalled an incident where despite being aware of his privilege as a White man, he didn’t use it in a way that he should have to defend and support a teammate.

“There’s been times when I was in Portland (as a member of the Blazers) , let’s just say a teammate came in and says I  got pulled over for no reason.  So I ask him about it like ‘what happened’ (He says) So I got pulled over for doing 36 mph in a 35 mph zone basically because he was a black man in a black neighborhood driving a nice car. They asked him where he was going and what he was doing. I didn’t say anything that day. ”  Leonard recalled.

During the next practice, Leonard apologized to the teammate. Whishing what he knew what to say but didn’t.  The lesson that Leonard took from that experience was to listen more to his teammates when they talk about incidents with police and other microaggressions.

One huge example of systemic racism can be found in the education. The moderator mentioned how Blacks have to work twice a hard to get as much as other culture, and asked what could be done as a society to give equality in the education system. Solomon Hill believes that it starts by making the request known.

“I think the start is demanding opportunities at the local levels,” Hill says, “When you’re in sports, there are certain high schools that you go to. You go to that high schools because they give you the best possibility  to get a scholarship and to go up against the best talent. Everyone with a little money in their pocket want to send their kids to the best school”

Hill continues to say that sometimes those schools aren’t local. He cites underfunding as an obstacle, and how they create restrictions.

“If you can’t give them a great education, then what possibilities do they have to be lawyers and doctors?”  Hill asked.

“It starts with holding  your friend or your peer that maybe is white or whatever, accountable. If they do something wrong or don’t see it the way it really is. The reality is that you need to tell them. “

Leonard says that not even loved ones should be immune.

“Even if it’s a family member, put their asses in check.”

Da 5 Bloods Is The Right Film For Our Times