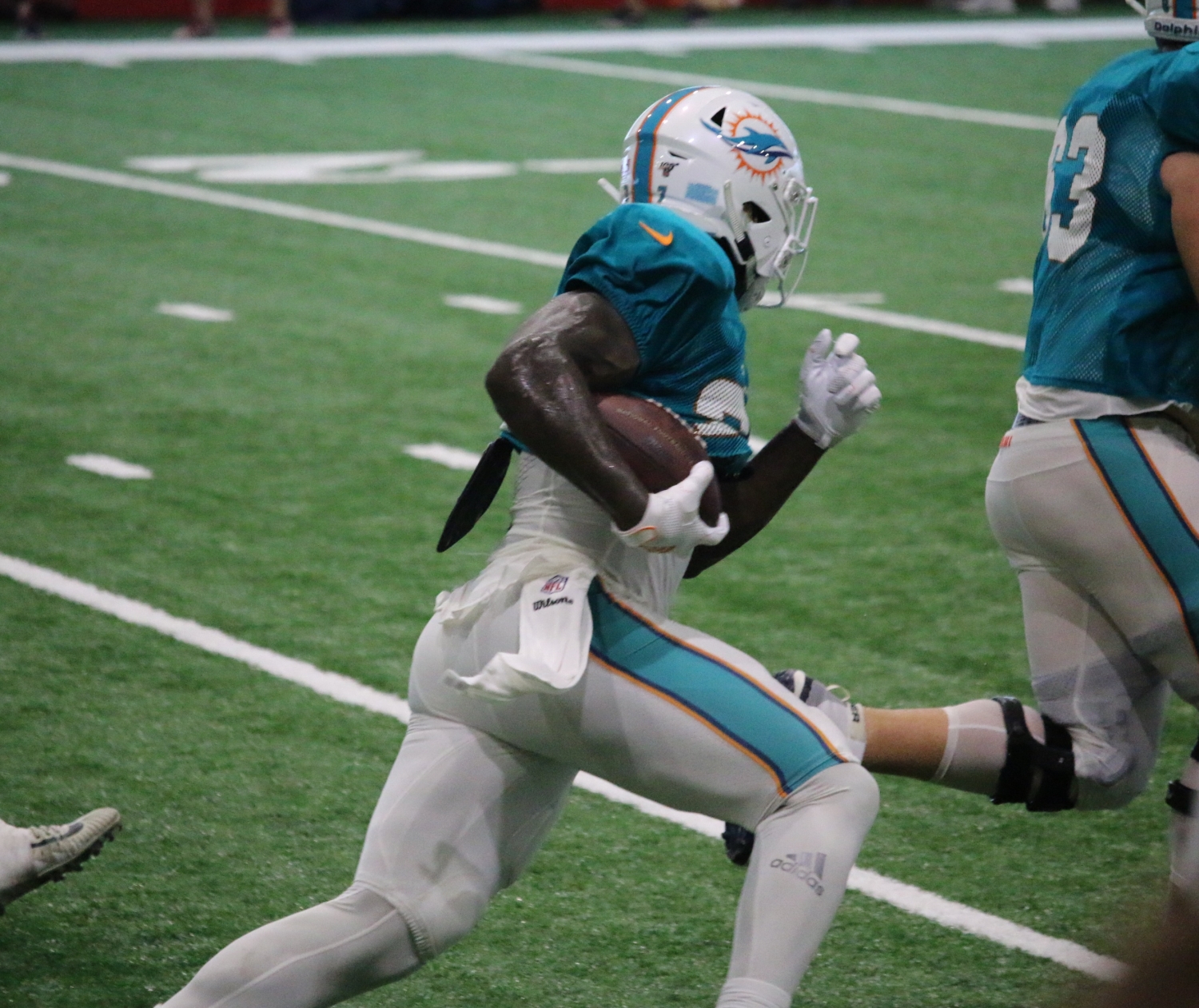 Wednesday concludes the joint training camp sessions between the Miami Dolphins and the Tampa Bay Buccaneers. Next, they will face off against each other in real game action, culminating the experience. As usual, there were ups and downs all across the board, but there were some higher highs and lower lows that stood out above the rest. Now the time has come to, for the final time this season, break down the top three performers in training camp.

Yes, he was on Tuesday’s top three list as well, but it cannot be denied just how strong Kalen Ballage has come on as of late. Tuesday’s practice saw Kenyan Drake walk off the field with a trainer and never return. Wednesday, he arrived wearing a walking boot, leaving the starting spot wide open for Ballage.

There's Kenyan Drake with his boot. Hopefully it's not as bad as it looks. pic.twitter.com/Tly2r9pL4x

And you better believe Ballage is taking full advantage of it, despite Drake’s injury not being viewed as serious. Tuesday, Ballage scored two touchdowns, and on Wednesday he scored three. The speed he displays when running down the sideline is staggering, and is frankly uncharacteristic of a player his size. This is exactly what Miami saw when they drafted him last season in the fourth round.

🚀🚀 Kalen Ballage turning on the afterburners in Tampa #FinsUp pic.twitter.com/BbAwBJQyTF

Everyone knows about his speed, but it’s his hidden power potential that, up to this point, was hidden away. Since getting this opportunity, Ballage has become aggressive with his running, and is even willing to make some hits. At last, he’s using the power his frame naturally give him. If he keeps that up, he could snatch the majority of snaps away from Drake when he eventually returns to the field.

Interesting choice for a second top three performer? Perhaps. But after leapfrogging veteran Jordan Mills as the second-team left tackle on Wednesday, his contribution cannot be overlooked. As soon as Jones-Smith entered the lineup, the left side of the offensive line found some stability that wasn’t there before. That’s telling, especially given how the OL has been in shambles for weeks now.

Obviously Pat Flaherty is no longer with Miami but it’s worth noting Jaryd Jones-Smith got the call-up in practice today against the Buccaneers to play 1st string LT, with Tunsil not participating this week. Big day for him. Did well. https://t.co/L8V6LssWWq

Granted, Jones-Smith was not perfect, giving up a whistled sack. But overall, his play was solid enough to warrant giving him this distinction. It’s been a rough road for the former Pitt standout, losing his dad to brain tumors and nearly losing his leg back in his college days. He and his record-breaking wingspan overcame those challenges however, and now he’s here to prove he has something to offer.

Armstrong is the top gunner on special teams with Walt Aikens out with a knee injury. But that isn’t why he’s making the list for Wednesday’s training camp. The second-year player out of Southern Miss didn’t get much coverage coming out of college, but Chris Grier and the scouting department saw something there no one else did. Armstrong is steadily improving as a cornerback, reading routes and making plays as a part of Miami’s backup unit.

Even Wednesday, Armstrong made an impressive play. He read the eyes of the QB and managed to deflect a pass in the endzone with a dive, laying out to prevent the catch. Dedication like that is always worth noting. Armstrong may not be getting a lot of looks, but he’s doing the best he can with what he is getting. With the Dolphins looking for someone to start next to Xavien Howard, he should get a chance to try.

Are the Miami Dolphins misusing Minkah Fitzpatrick?
Scroll to top