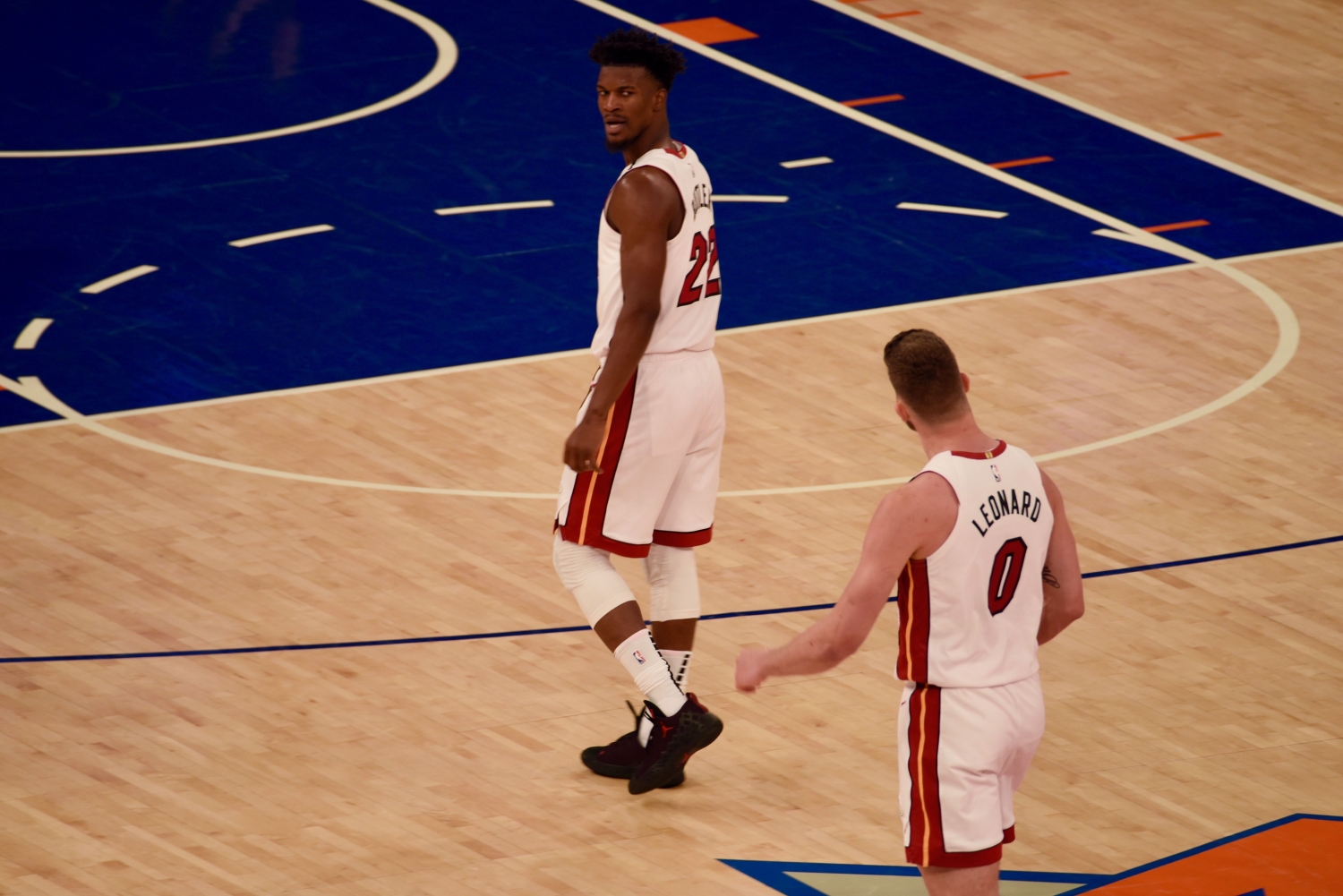 A 1-2 road trip isn’t the end of the world. Heck, losing to the Brooklyn Nets and New York Knicks (yuck) isn’t all that bad. They’re two losses in an 82-game schedule that, to this point, the Heat have probably overachieved in.

The way that those games were lost, however, is pretty frustrating.

241 American points were given up over the weekend, all in regulation. The Kyrie-and-KD-less Nets — with a rusty Caris LeVert to boot — probably shouldn’t have that sort of success. Neither should the Knicks, a hodgepodge of trade fodder surrounding a wet-behind-the-ears wing with a questionable jumper.

But alas, this is the way the Heat’s defense has been trending.

If you’ve been following The Launching Pad, you would’ve picked up on the Heat’s weekly defensive rating rising every week. Since December 1st, the Heat have a defensive rating of 111.3 (23rd). They’ve gone 14-7 in that stretch, but a 21-game sample means their defensive shortcomings don’t classify as a blip.

The Heat’s defense is like an onion — it stinks and it’ll make you cry, if it hasn’t already. More importantly for this discussion, there are layers to this problem.

DISCLAIMER: You’re more than welcome to skip the next section if you’re even marginally X’s & O’s inclined.

To understand where the cracks in Miami’s defense are coming from, you must understand what the Heat want to accomplish, and how they want to get there.

The Heat employ a “Drop” scheme against ball screens, which calls for the perimeter defender to fight over screens while the big man drops (aha!) into the paint. When done correctly, a drop scheme:

3) Allows help defenders to stay attached to guys in the corner, since pick-and-rolls are defended 2-on-2

4) encourages pull-up 2s or floaters, which are generally less efficient shots than 3s or shots at the rim

There are natural holes in that scheme. Pick-and-pops are coverage busters since the defensive big is tasked with hanging in the paint. It’s partly why guys like Karl-Anthony Towns are nearly impossible to deal with.

Pull-up artists — your Dames, your Kembas, your Trae Youngs — are particularly lethal if they can run their man into a screen. With the big in the paint, there’s no real chance for a contest on a quick pull-up unless you’re sending help elsewhere.

By virtue of their scheme, the Heat want to take away rim attempts first, corner shots second, above-the-break threes third, and let offenses feast or famine on in-between shots.

The Heat are doing precisely one (1) of those things well.

When you look at the efficiency of those shots, the story basically flips.

That kind of split begs the question: why are the Heat so bad at shot prevention?

Problems at the head

It starts up top, figuratively and literally.

The key to a drop scheme is the perimeter defender staying connected to the ball-handler. If he doesn’t do that, the burden shifts to the rest of the team to scramble. With the NBA being spacier than ever, scramble drills feel like death sentences. Cracks turn to craters reeeeally quickly.

This isn’t an example of a scramble drill. In fact, I’d say this was one of Miami’s best defensive reps from the Nets game. Meyers Leonard does a surprisingly good job of meeting Spencer Dinwiddie at the level of the screen. He hesitates on the contest, and Dinwiddie makes the shot. That’s still a pretty solid process with an unfavorable result.

What this is an example of, however, is Kendrick Nunn dying on a screen. This has been happening quite often since the first month of the season. He started the season hot as a point-of-attack defender, often “jumping” the screen — feeling where the pick is coming from and getting into the ball-handler’s body before the screener can even make contact — and staying attached.

Teams got privy to that, and we saw more guards start to back-cut him. Since then, Nunn has been a bit slower in his approach to attack screens. It’s led to less backdoor cuts, but he’s allowed himself to get screened, putting the rest of the defense in limbo.

As productive as Goran Dragic has been offensively, he’s been … let’s say the exact opposite of that on the defensive end. Dragic’s inability to stay connected on screens is a big reason why he’s in a bench role to begin with.

Tyler Herro and Duncan Robinson have been mostly fine as team defenders. They know when and where to rotate, and can execute simple dig-and-recover sequences when they aren’t directly involved in the action.

When they are attacked, either on or off ball, their lack of quick-twitch athleticism make them liabilities. Robinson in particular has struggled to stay connected. Here’s an off-ball rep:

The Nets sought out Robinson late in the 4th and essentially got what they wanted every time down. The clip above also sheds light on an obvious but not-discussed-enough fact of the Heat’s defense: they really don’t like switching.

Super Bam highlights aside, the Heat want to keep things simple. Via Second Spectrum tracking data, the Heat have ranked 25th in screens switched per 100 possessions in each of the past two seasons.

That’s not inherently a bad thing. But when the crux of your defensive principle is staying attached, and your players can’t do that, you’re going to give up the shots the Heat have been giving up.

First and foremost, this is a fantastic set play from the Nets. A big reason this play works is because they knew Leonard didn’t want to leave the paint. Running Timothe Luwawu-Cabarrot off a screen to occupy Bam was a smart wrinkle to take him and Leonard out of the play simultaneously.

Having Bam and Leonard switch that initial screen would’ve allowed Bam to hang at the top of the key to help defend the Joe Harris-Jarrett Allen action. Instead, Allen washes out Robinson with a screen, which leads to a scramble drill.

In lieu of switching, the Heat try to compensate by flooding the middle of the floor. I’ve talked a little about the Heat’s defense at the “nail” — the point of the floor slightly above the middle of the free throw line. Jimmy Butler has played a ton of free safety from that area this season, which has led to plenty of pick-sixes.

Why is Jimmy Butler leading the NBA in steals?

He has been an absolute ball hawk from the "nail" pic.twitter.com/7o6PkT8VcO

It’s a risk-reward dance that Butler has mostly won this season. In addition to jumping passing lanes, Butler also has the freedom to “dig” more aggressively into the paint for surprise strips. Things can go pretty poorly whenever Butler loses a bet.

The Heat’s commitment to taking away the middle is a big reason why they play so much zone. Having guys like Butler and Derrick Jones Jr. makes middle penetration and entry passes darn-near impossible. When teams are able to find the soft spot of the zone, bad things happen pretty darn quickly.

The Heat’s zone has generally been used as a change-of-pace option; as of late, it feels like its usage has come out of necessity.

How does it get better?

Depending on how you consume Heat basketball (or, I guess, basketball in general), this answer will either anger you or excite you.

This isn’t getting better without some personnel changes. It’s hard to imagine Erik Spoelstra deciding to get more switch-y. With this group, I’m not sure you can really afford to. Simplifying things can only take you so far.

If you guessed that this would be the section that I mention the name of one Justise Winslow, you would be correct!

It’s hard to overstate just how important a healthy Winslow would be for this defense. At his best, he’s the Heat’s second best perimeter defender and their best screen-avoider. Giving some of the Nunn, Dragic, Herro, or Robinson minutes to Winslow would be quite the upgrade.

(I’d also encourage you to check out the timeline of our own Christian Hernandez — @ICanBeYourHerro — if you want some of the ugly lineup numbers the Heat have dealt with at guard.)

Sadly, Winslow is still dealing with a back injury. There’s no telling when he’ll be 70 percent, much less when he’ll be back to his calling-Ben-Simmons-a-BAN self.

Maybe another week of this convinces Pat Riley to hit up Pelicans GM David Griffin to inquiry about Jrue Holiday. On a less exciting note, calling up the Sacramento Kings to check in on disgruntled Dewayne Dedmon to beef up the front court would make some sense.

Until then, your best bet is to hope some rest, good ol’ fashioned film review yelling, and home cooking can reinvigorate this group.

Guts Check: Try to win now or wait for 2021? Heat can do both
Scroll to top