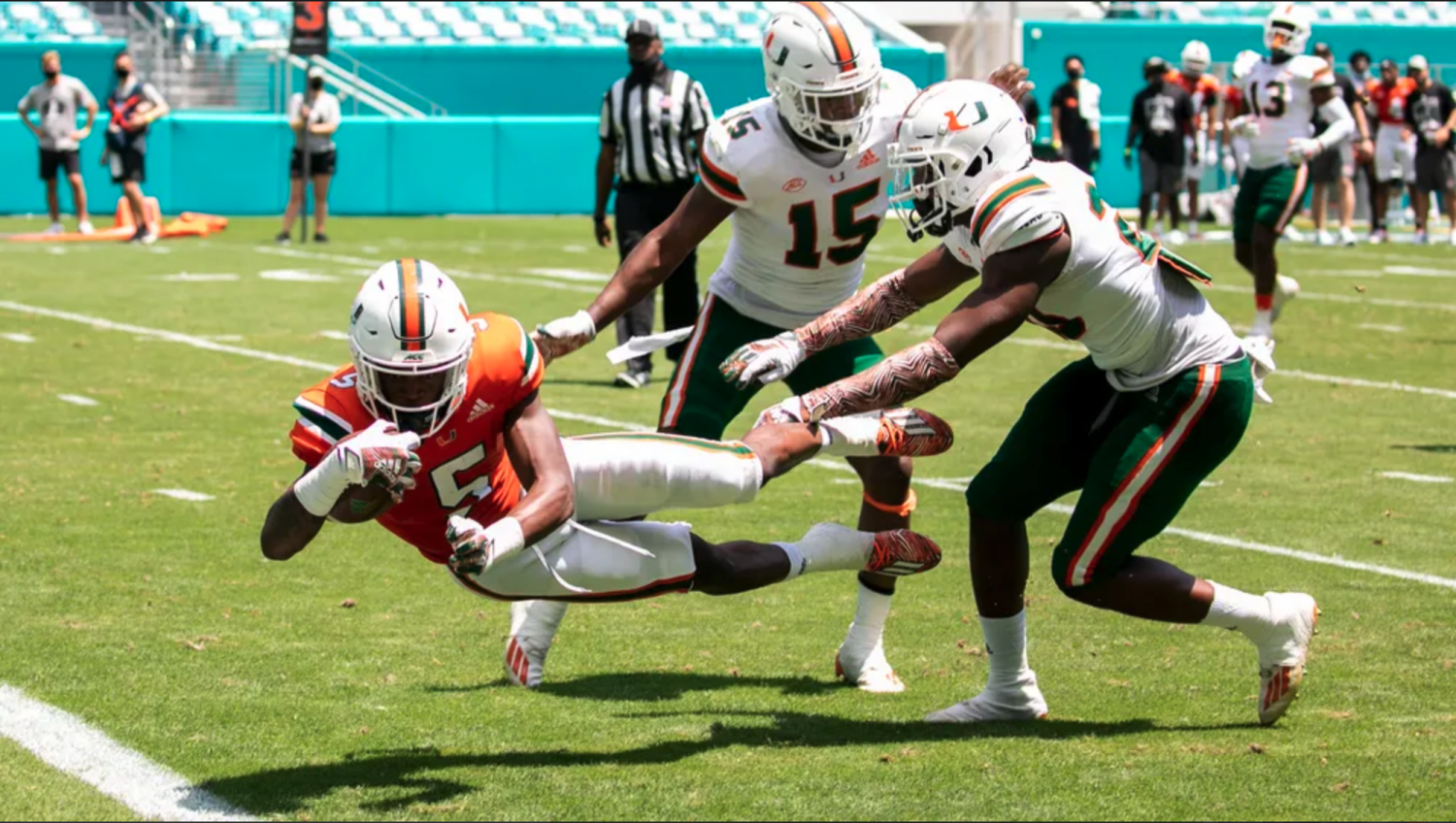 For the first time in 2 years, the Hurricanes were able to hold their annual spring football game. I gotta tell you, not only was it hot as hell but I was very excited just to see certain players in action instead of just going by either what they tell us in Zoom conferences and the cut-up highlights that the UM video department decides to give us. Let’s start off with some of my standouts from Saturday’s scrimmage.

Canes fans finally got a glimpse of the highly-touted true freshman QB and wow, he was a lot better than I thought. Jake finished 19/25 for 255 yards and 2 TD’s and that total could’ve been much higher considering a couple of dropped passes. Even as is, that’s a 78% completion percentage. But his body language was what stood out the most to me. If you’re going off just the eye test, he looked very poised and he threw every pass with confidence. Accuracy was not lacking either. He did catch flak from OC Rhett Lashlee for taking four sacks, but other than that, there’s a good chance you watched his performance and thought that Miami’s in good hands at QB for the next couple of years.

Jake Garcia with a 52-yard pass to Mark Pope pic.twitter.com/6gy3GWGfLH

WR1. Without a doubt. Rambo was a reliable receiver for both Garcia and Tyler Van Dyke all game. Rambo ended up transferring from Oklahoma due to a loaded depth chart but now finds himself as Miami’s best receiver. Following the scrimmage, he noted that he worked on his route running, blocking, and separation this spring and it definitely showed. 7 catches for 74 yards, including 3 in one drive with Garcia, he was always finding the open spaces within the defense and is looking an instant playmaker for Rhett Lashlee’s offense.

#TheU’s 1️⃣1️⃣ and 3️⃣ are going to be FUN to watch this fall.@CharlestonRambo brings Team Hurricane into the red zone, @MikeHarleyjr finishes it off.
pic.twitter.com/XZ3RBO4KqY

It looked like Smith has taken the next step in his game and will be vying for serious playing time in 2021. Even watching him last year, he’d play a lot bigger than his height at 6’0”. He finished 3 catches for 63 yards and 2 TD’s with one of those TD’s coming on a nice move making the catch on the outside and cutting inside.

Much like Smith, Restrepo flashed his improvement from Year 1 to Year 2 in the spring game, looking noticeably stronger and even a little twitchier and faster. X finished with 4 catches for 42 yards, including catching an incredible touchdown on a corner route from Tyler Van Dyke.

In case you wondering who #88 was making all those catches, his name is Dante Johnson. The JUCO walk-on transfer made quite a handful of catches and was a great safety blanket for every quarterback today. He’s listed as a WR but it’s almost as if he played tight end in lieu of all the absences at the position. Even Charleston Rambo calls him “Dez” in reference to Dez Bryant, noting that he’s very tough to tackle.

Dante Johnson is a name all Canes fans know after yesterday’s spring game. The former JUCO had a few catches including this big play making guys miss downfield. We lack size at WR and Johnson could fill that void. pic.twitter.com/8f5a8gpBPz

Where do I even start. Even after missing his freshman year, Williams looks like he hasn’t skipped a beat from being previously named the top safety in the country coming out of high school. It was very hard to miss #15 on defense and not only was his coverage solid, but you can tell he’s a very physical safety who is not afraid to lay the wood down on any receiver coming down the middle.

Although a blue-chip recruit in this recruiting class, Kinchens hasn’t received nearly enough attention as five-star James Williams, who will arrive in Coral Gables in the summer. But Kinchens has an edge right now, enrolling in January and showing that he should find himself in the rotation this season. The 6’0” Kinchens had 6 tackles and added an interception on Saturday.

Miami created the striker position a few years ago for a player who you could consider positionless and versatile, and that’s exactly what Manny Diaz had in mind when he recruited Smith during this past recruiting cycle. Smith got a lot of run during the scrimmage and just like much of the other freshmen mentioned, he didn’t play like his age. He was tied for the most tackles with 6 and added 1 PBU. It seemed like he had a good nose for the ball on short-yardage plays. He tackles like a linebacker but also tracks the ball like a safety. I feel like the team’s decision to move Keontra Smith to linebacker was heavily influenced by how well Smith has been playing this spring.

Another great addition from the transfer portal, Johnson’s starting to find his footing within the Miami defense. Johnson was wreaking havoc on Jake Garcia and the offensive line, finishing with 2.5 tackles for loss and 1 sack on a safety. It’s looking like he’s making the most of his opportunity to not only come back home to play in front of friends and family but also to improve under the lead of DL coach Jess Simpson.

Canes fans awaited the appearance of Georgia transfer Tyrique Stevenson on Saturday, and don’t get me wrong, he definitely took care of business and played great coverage throughout the day. But like the safeties, it seemed to me that Dunson was already around the ball when it was thrown to the outside. In fact, he had a would-be interception on Peyton Matocha’s first throw if he was able to stay inbounds. Dunson finished with 5.5 tackles, 1 PBU, and 1 fumble recovery.

* The spring game was a tough one for Mark Pope. Like I’ve reiterated time and time again, the biggest thing I was looking forward to in spring practice was how Mark and Dee Wiggins would respond to the team deciding to add Charleston Rambo to the fold when the former two are seniors. Two drops, including one with no defender within 8 yards, marred a six catch, 115-yard performance.

* I didn’t even mention Keyshawn Washington’s name but I saw him around the ball plenty. With much of the attention focused on the 2021 freshmen, he’s definitely a sleeper on this loaded safety unit. He had a big hit on Daz Worsham in the first quarter that led to a fumble and left Worsham noticeably shaken.

* Wearing a very stylish and loud arm sleeve, freshman kicker Andres Borregales made all 3 of his field goal attempts from 43, 21, and 32 yards with ease. Miami’s in a very fortunate position to recover from losing Andres’ older brother Jose to the NFL.

* Tyler Van Dyke also had a solid day, completing 12/17 passes for 102 yards and 1 TD. He still had a slight edge with the QB2 battle just off his knowledge with the offense, but I’d imagine that next year, when Garcia becomes more comfortable with the offense and takes the next step, this could make for a very interesting battle next year. And that’s not even including the impending addition of four-star QB Jacurri Brown.

* Overall, for a spring game, the game wasn’t really sloppy by any means. A couple of false start penalties but the offensive line also played relatively well. Canes fans should be excited about the team heading into fall camp.

Five Takeaways from Heat’s Win Over Brooklyn
Scroll to top