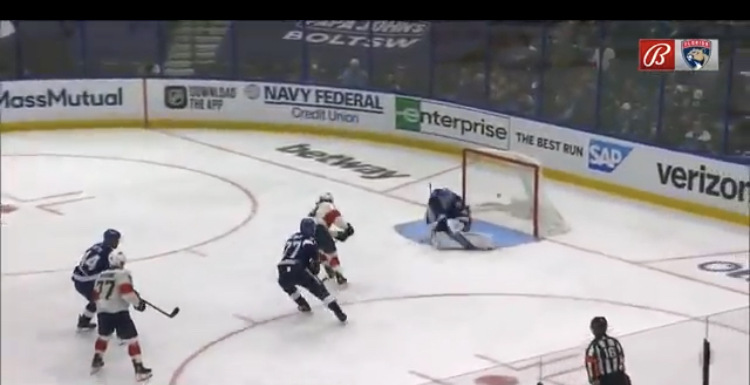 The Florida Panthers clawed their way back into the series with a 6-5 overtime win against the Tampa Bay Lightning on Thursday night. It wasn’t the prettiest of wins, but all that matters is the “W” in the win column. Here are tonight’s five takeaways.

After shutting out the Lightning in the first period, Florida started the second with a 2-0 lead. What followed suit was quite possibly the worst period of hockey all season by the Panthers. Florida conceded five goals in the second period and were 0/2 on the penalty kill.

Florida wasn’t strong in front of their own net and Tampa exposed that by out muscling the Panthers in 50/50 battles, leading to multiple goals in front of Chris Dreidger’s crease. Dreidger was pulled after the second period and was replaced by Sergei Bobrovsky.

Tampa’s five goal onslaught quickly wiped away Florida’s two-goal lead and stole all the momentum from the Cats in the second. The Panthers only got one goal in the period and Tampa led 5-3 after 40 minutes of play.

Despite the six goals against on the stat sheet, Andrei Vasilevskiy still showed why he is one of the best goaltenders in the world, specifically during the second period. While Florida had a defensive collapse in the period, the forwards continued to put the pressure on the Lightning.

Prior to the fifth Lightning goal, MacKenzie Weegar had a golden opportunity to tie the game at four a piece when he found himself alone on Vasilevskiy. Weegar had the perfect angle to pull the puck across his body and bury it into the far side corner of the goal, the only thing stopping him was a sprawling poke check by the Russian netminder. Tampa went on to score after the big save and grabbed a two-goal cushion on the Cats.

Vasilevskiy quickly bounced back from a poor first period and won the goaltending battle against Chris Dreidger. Without his play during the second, Tampa may not have scored as many goals as they did. He ended the night with 41 saves.

When you blow a two-goal lead in under 10 minutes, at least one thing had to have gone wrong. In Florida’s case, bad decisions led to their blown lead in this game.

Whether it was turnovers in the neutral zone, taking penalties in the offensive zone, or getting burnt on odd-man rushes in transition, the Panthers didn’t play their best hockey in that game.

First of all, Tampa once again showed that their power play is dangerous, going 2/3 on the man advantage. In Game 1 they scored three on the power play. One of the keys to the series was to keep Tampa off the power play, unfortunately it almost cost them again in Game 3.

The Panthers won tonight, but it was a close game that had a lot of mistakes. If you give Tampa an opportunity, there’s a good chance they’ll make you pay.

No Yandle, no problem

Tonight the Panthers and Coach Q made a big decision, one that potentially changed the outcome of the game and that was to scratch Keith Yandle.

Yandle has the second longest ironman streak in NHL history for consecutive regular season games played with 922. He played in the first two games of the series, but he has often turned over the puck too many times in important situations. In Game 2, a Yandle turnover led to Tampa’s game clinching empty net goal, putting the Cats down 0-2 in the series.

Panther fans immediately called for Yandle to be benched and that’s exactly what happened.

The biggest on-ice strength for Yandle is his ability to quarter back the power play. Without Yandle in the lineup tonight, Florida had to switch up their top power play unit. Luckily for the Cats, they didn’t seem to miss a beat, going 2/2 on the man advantage without their long-time top PP defenseman.

Once again, the Cardiac Cats kept you on the edge of your seats until the final whistle. Heading into the third period down two against the defending Stanley Cup Champions, you wouldn’t think the Panthers could come back after the disaster of a second period, right? Well, we know what happened.

Coach Q made the decision to yank Chris Dreidger and put Sergei Bobrovksy back in the net. Bobrovsky last played in Florida’s 5-4 Game 1 loss.

The Panthers opened the third with a power play goal, cutting the deficit to just one. They continued to push the play but Tampa held onto their lead until the dying minutes of the game. That’s when Gustav Forsling found himself open in the slot and buried a five-hole goal behind Vasilevskiy.

The Cardiac Cats forced overtime, but they had to kill off a penalty against the always dangerous Lightning power play. After killing off the penalty, Florida never looked back.

The game winning goal came off of a defensive zone face off that was quickly broken out of the zone. Radko Gudas played an aerial puck towards center ice, which found its way towards Frank Vatrano. Vatrano tipped the puck behind the Lightning defense and Ryan Lomberg bursted into the zone alone on Vasilevskiy. The unsung hero “Lomberghini” beat the former Vezina winner glove side and brought Florida back in this series.

The Cardiac Cats are back and they are ready to try and tie up the series in Game 4. Bobrovsky is the expected starter for Saturday.