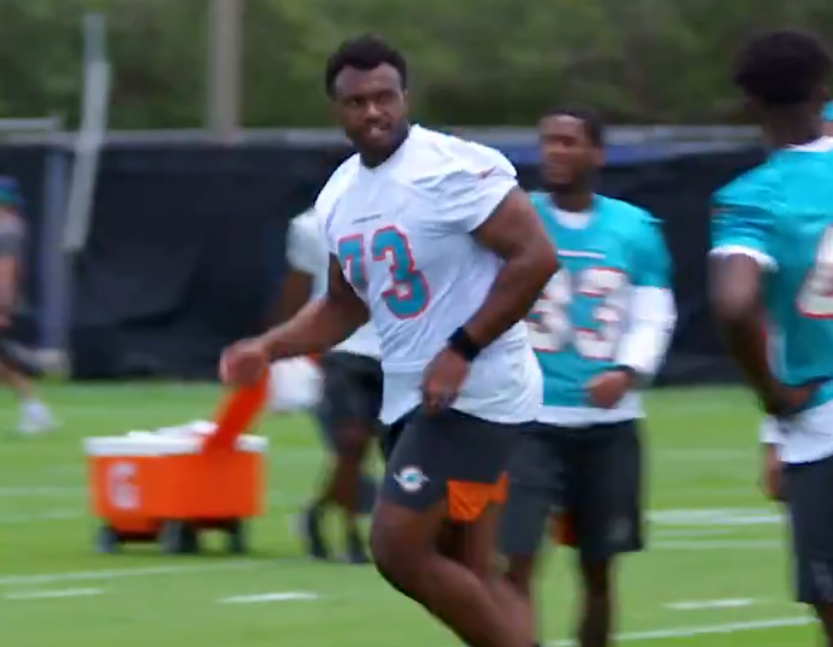 Austin Jackson is entering his second year in the NFL. That means one of two things. He is either going to make the biggest leap of his career, or he is going to begin the dreaded sophomore slump.

Many players have suffered from this dreaded phenomenon. Matt Ryan, Sam Bradford, even former Dolphins defensive back Minkah Fitzpatrick didn’t do nearly as well in his second year in the NFL. However, there are many players who escape the slump, and instead improve tremendously after suffering growing pains in their rookie year. Jackson, for his part, went through a lot of growing pains in 2020. On top of the usual in-game adjustments required by all rookies, he had to endure pandemic-related restrictions throughout the year.

Fortunately, things are finally changing for the better.

“Things are a lot different when you’re not in a pandemic, first and foremost obviously.” Jackson said on Thursday. “Being able to just have way more access to resources this year as opposed to last year certainly helps a lot. Getting my feet set for my second year, having more knowledge, knowing a little bit more of what to expect is pretty good. I would say that’s probably the biggest difference from this time last year to this time this year … Last year was very unusual for I think everybody. I think that everybody in the world had an unusual last year. The NFL was definitely affected. We have all of our drafted guys down here already; but my class, we weren’t able to do that. It’s a big difference. I think we’re all excited to get over this thing.”

In spite of the limitations, Austin Jackson had a decent rookie season as the starting left tackle. He certainly isn’t on par with his predecessor, Laremy Tunsil, but he showed promise. That untapped potential is what Miami is counting on for the 2021 season. With one year under his belt, Jackson is turning his attention to honing his technique.

All of Austin Jackson's true pass sets against Haason Reddick and Melvin Ingram. He still has areas to improve (anchor, punch, hand placement), but its great to see him step up against top competition.

“Obviously every year – well, that’s not obvious but every year, you want to kind of try to take off bad weight and add more good weight because muscle is heavier.” Jackson said. “Just working out and making sure my technique is consistent. It’s hard to pick one thing to work on because you’re pretty much working on everything. But I can say that knee bend and getting lower is something I’ve been working on – my flexibility. Strength and conditioning, torque power, turn power and all of that stuff, that’s something we as offensive linemen work on every day.”

Austin Jackson has high expectations on him as a first-rounder. The former standout out of USC was selected over the likes of wide receiver Justin Jefferson, who made the Pro Bowl as a rookie with the Minnesota Vikings. Fair or not, rookies always get compared to their fellow draftees. First rounders most of all. Austin Jackson knows this. He also knows the old adage that players make their biggest improvement from year one to year two.

“From a personal standpoint, it’s really exciting.” Jackson said. “As a competitor and as a teammate, I definitely want to go out there and do everything perfect for myself and for my team. Having that kind of expectation, but also having the knowledge of what needs to be done, is exciting. It excites me a lot and I’m looking forward to it.”

Should he stay at left tackle, Austin Jackson actually will not be responsible for the blind side of the quarterback. With Tua Tagovailoa being a left-handed QB, that responsibility falls squarely on the right-tackle’s shoulders. Nevertheless, an offensive line is only as strong as its weakest link. When Laremy Tunsil was traded, it showed the team’s confidence in developing a replacement. Jackson has to at least reach that standard as the Dolphins prepare for a playoff run. He cannot be a weak link.

Fortunately, Jackson has an excellent chance to improve in his second year. The culture is non-negotiable. Development of players is priority one for this coaching staff. And it’s clear Jackson’s teammates have confidence in him as well.

“I think just the way that he comes into work on a daily basis.” said Dolphins linebacker Andrew Van Ginkel. “He’s competitive, he’s tough and he’s going to do exactly what the coaches ask of him, so I expect him to make a big jump in his second year and just to continue to improve and get better. I’m looking forward to seeing how he progresses this year.”

Will the sophomore slump drag Austin Jackson down in 2021? Or will he see a dramatic improvement? All signs point to the latter. He’s one of the youngest players in the NFL, and he already has a year of experience under his belt. Now with access to all the resources he lacked in his rookie year, who knows what’s to come?