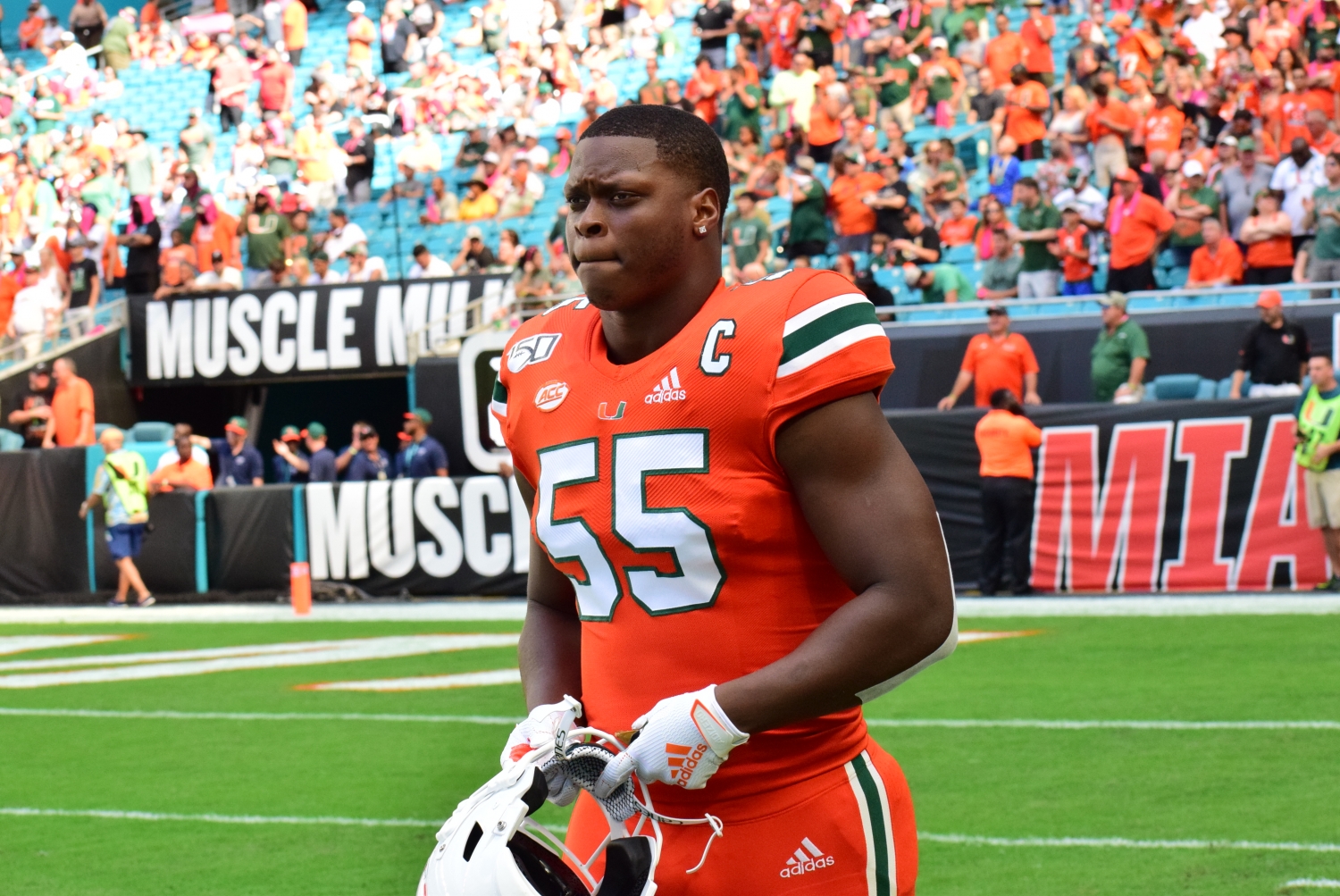 The 2020 NFL Draft, barring any unforeseen changes, is expected to take place on April 23rd through the 25th. It’s going to be a little bit different this year as the draft is going to be held via phone and internet with every GM in the league basically having their IT setup within their own homes. In addition, Roger Goodell will be making all of the 1st-round picks announcements from his basement.

Despite limited bowl success within the last 15 years or so, the University of Miami has been notoriously known for consistently pumping quality talent into the NFL in that same timespan and this year should be no different. Miami has eight players in the draft, although fans will be disappointed to hear that none of them will probably hear their names called within the first 4 rounds. Without further ado, here’s some info on which Canes could be selected,

Dallas decided to forego his senior year to enter the draft and he’s had a fairly productive career in Coral Gables. He finally earned the starting job in 2019 and finished with 265 carries for 1,527 rushing yards for 5.8 yards/carry. He’s been very reliable for the team and a very hard worker so it would not surprise me to hear his name called towards the latter end of the draft in a backup role.

Like Dallas, the electrifying Thomas is also entering the draft early. Thomas finished his UM career with 83 catches for 1,316 yards and 8 touchdowns along with one touchdown off a punt return. He showed flashes of his speed and game-changing ability but was unable to develop consistency. In addition, off-the-field incidents still haunt him, marred by his decision to transfer in 2018 (he later off backtracked and returned to Miami) and a short suspension in 2019. Nevertheless, if things work out, Thomas could be productive in the slot and on special teams as a kick/punt returner.

Osborn was Miami’s best wideout in 2019 in terms of overall performance and consistency and joined the Canes as a grad transfer from Buffalo, immediately establishing his veteran presence once he entered the weight room. 2019 saw 50 catches for 547 yards and 5 touchdowns for KJ and proved to be the addition that coach Manny Diaz hoped he would become. He even served as Miami’s primary kick and punt returner. However, Lance Zierlein of NFL.com doesn’t expect him to get drafted but will most likely be picked up by a team afterwards.

There’s a strong likelihood that “Spider” will be the first Cane off the board. Garvin was known for being very disruptive in the backfield and his biggest season came in 2018 when he finished with 60 total tackles, 17 tackles-for-loss, and 5.5 sacks. According to Zierlein, one big factor in determining Garvin’s longevity in the league will be his consistency, as his numbers did dip in 2019 (37 tackles, 9 TFL, 5 sacks) but he can be tenacious and carries a great, long frame. Garvin will likely be the first Cane off the board.

Hill joined the Canes as a grad transfer from Virginia Tech and was known as a terror for the Hokies. He only started one game this past season but was still very productive off the edge, compiling 27 tackles, 9.5 tackles-for-loss, and 4.5 sacks. Off-the-field concerns stemming from his dismissal at Virginia Tech along with his poor 40 time at the combine may ultimately prevent him from hearing his name called.

You can call Quarterman an “ironman” of sorts, as he played and started every game while at Miami. He’s always been a very consistent tackler and leader for the defense. His senior season happened to be his best season with the Canes, totaling 107 tackles with 15 tackles-for-loss. Quarterman has never had less than 82 tackles in a season so he is used to a high-volume workload. Zierlein predicts that he could be selected as early as the 5th round.

Pinckney is in the same category as Quarterman in terms of his durability, just a slightly different position as he plays inside. His stats have been fairly consistent throughout his four years in Coral Gables, as his last three years saw him go from 11 to 12.5 tackles-for-loss while compiling at least 64 tackles in each season. However, Zierlein believes that scouts feel the same way but in a sense that he has not shown steady improvement since his freshman year. Pinckney could still hear his name called towards the end of the draft.

You would probably won’t see that many cornerbacks played with as much grit, toughness, and energy as Mr. Bandy. Despite standing at only 5’9”, he’s been a very productive corner for Manny Diaz in his three years and became a starter by his sophomore year, where he earned 3rd-team All-ACC honors. Bandy’s career totaled 90 total tackles and four interceptions. Canes fans can’t forget when his lone pick-6 came during his freshman year against 3rd-ranked Notre Dame that probably made Hard Rock Stadium the loudest place on the planet for a minute. I can definitely see Bandy help a team in a nickel role but it would have been ideal if he had stayed at Miami for another season.