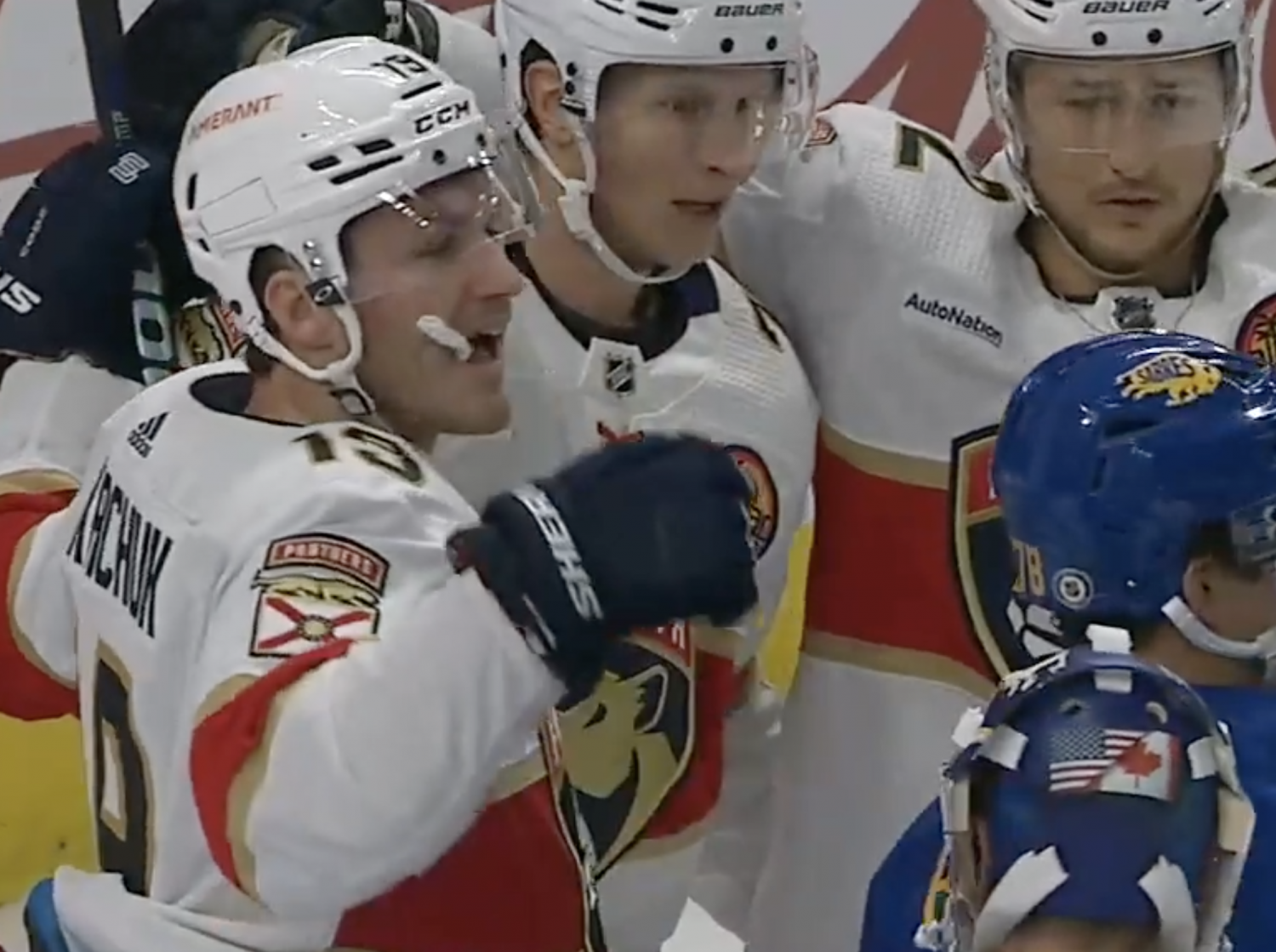 The Florida Panthers are leaving New York the same way they entered the state two days ago, undefeated.

Yes, the season started two days ago but the Cats still began the campaign with two road wins following their 4-3 victory over the Buffalo Sabres on Saturday afternoon.

Spencer Knight picked up his first win of the season as the Panthers moved to 2-0 on the young NHL season.

Thursday’s game against the Islanders saw the new look Panthers power play get numerous scoring chances but no goals, going 0-5 on the night.

That changed today as the power play found the back of the net twice, with goals coming from defensemen Aaron Ekblad and Brandon Montour.

With the way Florida’s sets up their power play, it was bound to generate scoring chances off their quick passing and efficient off the puck movement within the zone.

Having Montour control the top of the blueline allows Ekblad to freely move on the left side of the ice, which is his off-side wing. This opens up the opportunity for one-timers around the goal.

Matthew Tkachuk hovers between the goal line and the crease, allowing him to be the bumper down low. Any time he is near the net, there’s bound to be some chaos, which is exactly what happened on Montour’s goal.

Tkachuk took open space near the net, fed the puck to the front and Montour found the loose puck and put it away.

This power play gets its fair share of looks and they didn’t waste their chances today.

Matthew Tkachuk is living up to his trade value

For the second game in a row, Tkachuk found himself with a goal next to his name on the stat sheet.

He does so many little things right, with and without the puck. On his goal, he picked up the puck in the neutral zone and decided to use the small amount of space that was available on the boards to push the play rather than cutting into the middle.

After making a great pass to set up Eetu Luostarinen in the slot, Tkachuk set up shop in front of the net as Gustav Forsling had a shooting lane from the point. Despite having two Sabres defenders and the goalie in his way, Tkachuk fought around the traffic to put away the rebound.

Sam Reinhart said a few weeks back, “I think he pisses you off because he’s good, he backs it up,” when speaking about Tkachuk. That quote was crystal clear today as he got into it more than a few times with the opposition, even after the final whistle was blown.

Between his offensive capabilities, physical play and ability to  draw penalties, he’s the perfect player for this team. He has three points on the year so far, expect that number to increase nearly every game. Also expect the post whistle fights to trend upwards as well.

This third line is an interesting one on paper. You have 21-year-old Anton Lundell, centering Eetu Luostarinen, who was moved to the wing after spending last year as the fourth line center and Colin White who was picked up in the offseason after being bought out by the Ottawa Senators.

Through two games, this trio haven’t looked out of place, with all of them getting on the scoresheet today.

Luostarinen’s increased ice time is allowing the skilled Finnish forward more chances to be a difference maker. He found the back of the net against the Islanders and he made a key pass to pick up a primary assist on Colin White’s goal today.

Speaking of White, the former 2015 first-round pick came to Florida looking for a fresh start after spending his entire NHL career with Ottawa. Today he not only got his first goal as a Panther, which was a nicely placed one-timer from the slot, but he also hit the 100 point milestone for his career.

Lundell was a standout last year in his rookie season and his sophomore year is off on the right track. Paul Maurice clearly trusts the youngster as he gets both penalty killing minutes and second unit power play time. He hit just over 17 minutes of ice time today and picked up his first point of the season.

Both sides picked up A LOT of penalties

If your favorite NHL trophy is the Lady Byng, this was not the game for you.

The two sides combined for a total of 28 penalty minutes.

Buffalo had the edge on the undisciplined meter, picking up two more penalties than Florida.

The Panthers penalty kill was able to completely shut down the Sabres, as Buffalo wasn’t able to find the back of the net on the man advantage, even with an abbreviated 5-on-3 opportunity.

Florida on the other hand didn’t let their numerous PP chances go down the drain as they picked up two power play goals.

The refs’ whistles were busy today in Buffalo.

Florida’s team defense locked it down in the third

Entering the third period, Florida’s lead was just one and Buffalo came out of the intermission with much needed momentum following Rasmus Dahlin’s last minute goal in the second.

The start of the third looked like it could all swing Buffalo’s way as they had an abbreviated 4-on-3 and 5-on-3 power play within the opening minutes. However, Florida locked it down.

After killing off the penalties, Florida did not let a puck get near Spencer Knight for over 14 minutes. Buffalo got their first shot post power play with under two minutes remaining in the game and weren’t able to create any looks due to the Panthers defensive efforts.

It was a huge team performance in the final period for Florida, they were rewarded with two points for their efforts.