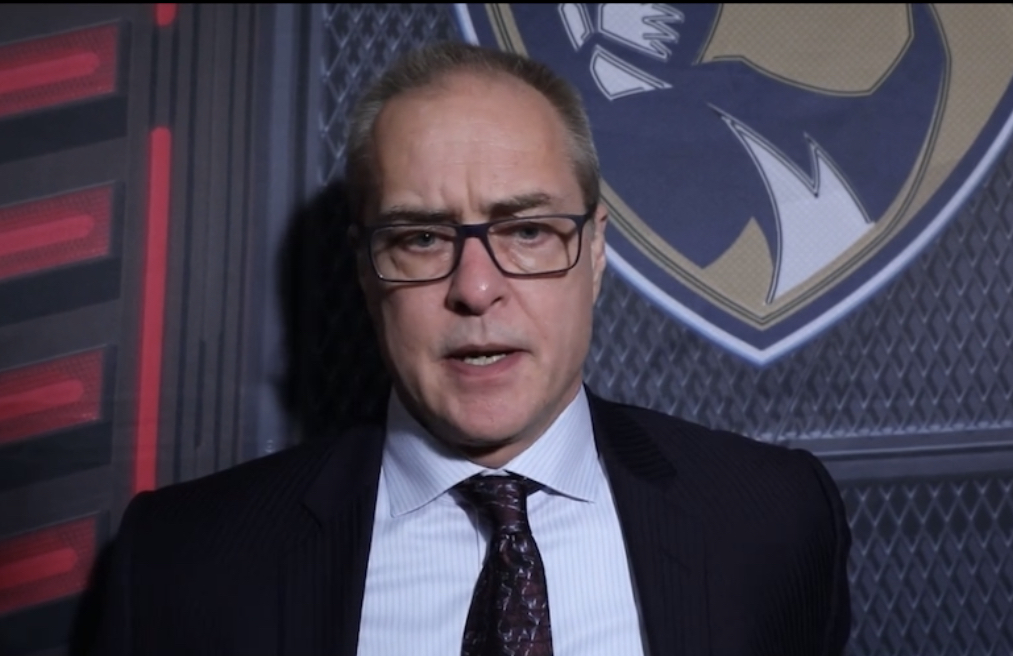 TORONTO: In a game that was anything short of ordinary, the Florida Panthers dropped a hard fought game to the Toronto Maple Leafs 5-4 in overtime.

Between the interesting calls in the game and the reaction from head coach Paul Maurice, this game was something to talk about.

Here are the takeaways.

By the second period, this game had so many penalties called we started to lose count.

The story of tonight’s game was all about the officiating.

Between 30 combined penalty minutes, confusion on which team received the penalty, on top of questionable calls.

“I don’t know what the hell those guys were doing tonight but it wasn’t Florida Panther friendly.”

Maurice continued, “I just explained to them [his team], it had nothing to do with my players, it had to do with me and the relationship that I have with one of the referees, that’s what that was all about,” he said.

At the end of the night, Florida had 18 of the 30 total penalty minutes in the game.

The Panthers’ defenseman has been having a career season on the blueline. Tonight in his 44th game of the season, he got point No. 37, which ties his career best.

Last season, Montour finished the year with 37 points in 81 games. In nearly half the amount of games, he has reached that.

“He is an incredibly elite skater, above and beyond what you normally see,” Paul Maurice said. “He’s starting to use that speed, that skating to defend. When he does that, he’s going to be a star.”

The Brantford, Ontario native has been one of the best players for the Panthers this season and comfortably sits top to in points by a defenseman in the NHL.

“He’s calm, he’s confident,”  Aaron Ekblad said about Montour. “I love Monty’s game and it’s a treat to play with him.”

While Florida wasn’t able to string together that third-straight win tonight, which would’ve been their first winning-streak of the season, the team has picked up five of a possible six points over that three game stretch.

“I feel like we’ve been finding our identity a little bit,” Panthers captain Aleksander Barkov said. “I think the last two, three weeks we’ve been kind of finding how to play as a team, how to work really hard, play smart.”

The Panthers next opponent is a Montreal team that they defeated a few weeks ago 7-2 at home. Florida has a great chance to pick up more points on the road on Thursday.

Panthers get second short-handed goal of the season

Florida’s penalty kill was extremely busy tonight and they fared pretty well considering they had seven power plays to kill, keeping the Leafs to two goals on those attempts.

The short-handed goal department hasn’t been explosive this season, with Florida only having one tally on the kill to their name prior to tonight, which belonged to Anton Lundell.

Lundell was able to make that number two tonight, as he scored the team’s second shorty of the season, off a nice link up play on the kill between him and Barkov.

Barkov didn’t convert on the initial breakaway attempt after stealing the puck in the neutral zone, however his linemate and fellow countrymen were right behind to put away the rebound.

Lundell has goals in back-to-back games.

Grigori Denisenko is working hard to stay in the lineup

Tonight was the second game in a row that saw Grigori Denisenko in the lineup. He replaced a struggling Colin White yesterday in Buffalo and retained his spot on the third line tonight in Toronto.

The former first-round pick of the Panthers hasn’t been able to make his mark in the NHL yet, however you can see the clear improvements in his game and why the team wants him in the lineup now.

Denisenko played a hard fore-checking game and his game down low led to him picking up an assist on Josh Mahura’s goal.

Paul Maurice said he likes the type of puck control game that Denisenko brings to the table.

“He’s hard on pucks and he’s strong on pucks and I’m really trying to work on some puck control here, not throwing pucks away,” Maurice said. “He’ll hang onto a puck… he’s got the understanding on how hard you have to work to be a good player and he’s starting to do it, so we’re pretty excited.”