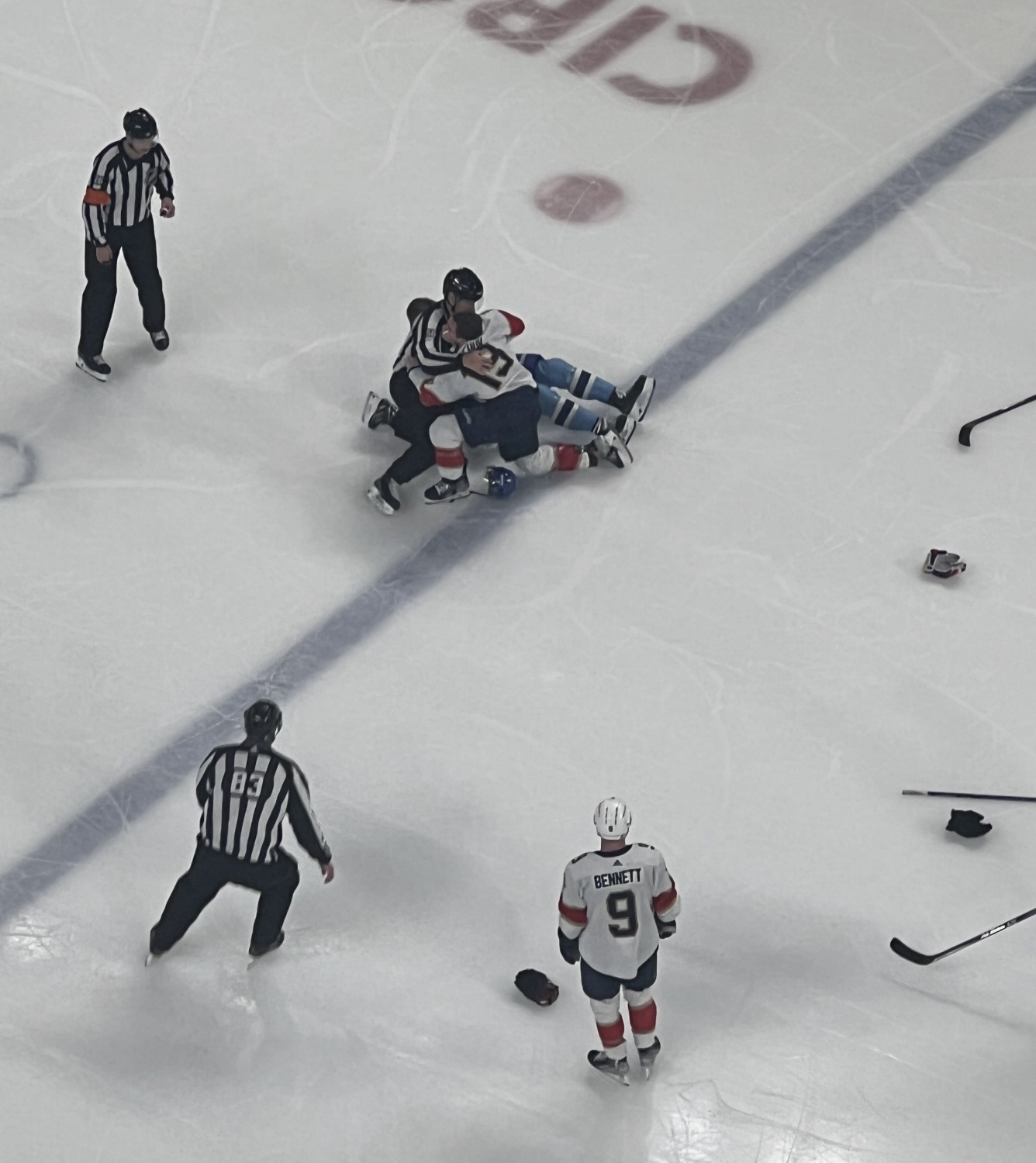 MONTREAL: The Panthers ended their three game road trip with a dominating 6-2 win over the Canadiens in Montreal.

The team will head back home to face Minnesota on Saturday night before jumping on the road again for another away back-to-back.

Early injuries for the Panthers

Florida saw two of their veterans leave the game in the first period, both of whom did not return.

In the opening minutes of the game, goaltender Sergei Bobrosvky appeared to hit his foot against the post when sliding over to the opposite side of the net.

He left the game at the next whistle, leaving Alex Lyon in goal the rest of the way.

Later in the period, when Eric Staal was chasing a puck in the offensive zone, Canadiens defenseman Mike Matheson laid a reverse hit on Staal.

Staal did not have possession of the puck when he took the hit.

The 38-year-old was slow to get up and eventually went to the Panthers’ locker room.

Both players will get looked at tomorrow, per head coach Paul Maurice.

With Sergei Bobrovsky leaving the game in the first two minutes, the usual Panthers’ third-string goalie Alex Lyon had to play pretty much the whole game.

Lyon has been the Panthers’ backup goalie with Spencer Knight on IR, however he has not played in a game this season with Florida.

The 30-year-old goalie played a solid game, finishing the night with 23 saves on 25 shots.

Lyon had no problem jumping into the game after Bob went down.

“I think experience goes a long way,” Lyon said.  “Just getting into more of those situations, you get more confident. Just trust yourself and trust the things that make you good and just stay in the moment.”

The biggest area of domination for the Panthers tonight was on the man-advantage.

Florida scored four goals on the power play, with two of those coming from Matthew Tkachuk. By the time they scored the last power play goal, it was a five goal game.

The Panthers took their time on the PP; controlling the puck, feeding the open man and shooting with open lanes.

“We had good patience on the power play,” Paul Maurice told the media.

It has a fantastic season for Panthers’ defenseman Brandon Montour.

On Tuesday night in Toronto, the 28-year-old tied his career-high point total at the 44 game mark of the season.

Two days later in Montreal, Montour surpassed his previous best, as he now sits at 38 points in 45 games. Last season was his best year to date, with 37 points in 81 games.

As he sits top-10 in defenseman scoring league wide, Montour is on pace to shatter last season’s point total.

Montreal and Florida really have no history between each other.

Besides a few trades and former players playing on both teams, there’s not alot there.

This season on the other hand has seemed to ignite a new fire between the two sides.

In tonight’s game, it was anything but clean hockey. The third period had three fights, there were bodies flying everywhere, the game had more than the usual bad blood.

By the end of the night, there were 90 combined penalty minutes, with Montreal’s 57 being the majority.

Panthers’ forward Ryan Lomberg was one of the players who dropped the gloves in the game.

“Two teams that are close in the standings pushing for that spot…they’re a good team, it’s competitive,” Lomberg said. “We love that type of game and we’re pushing for the playoffs here so we’re trying to play a playoff style game for sure.”

Why Live Blackjack is Perfect For Basketball Fans
Scroll to top