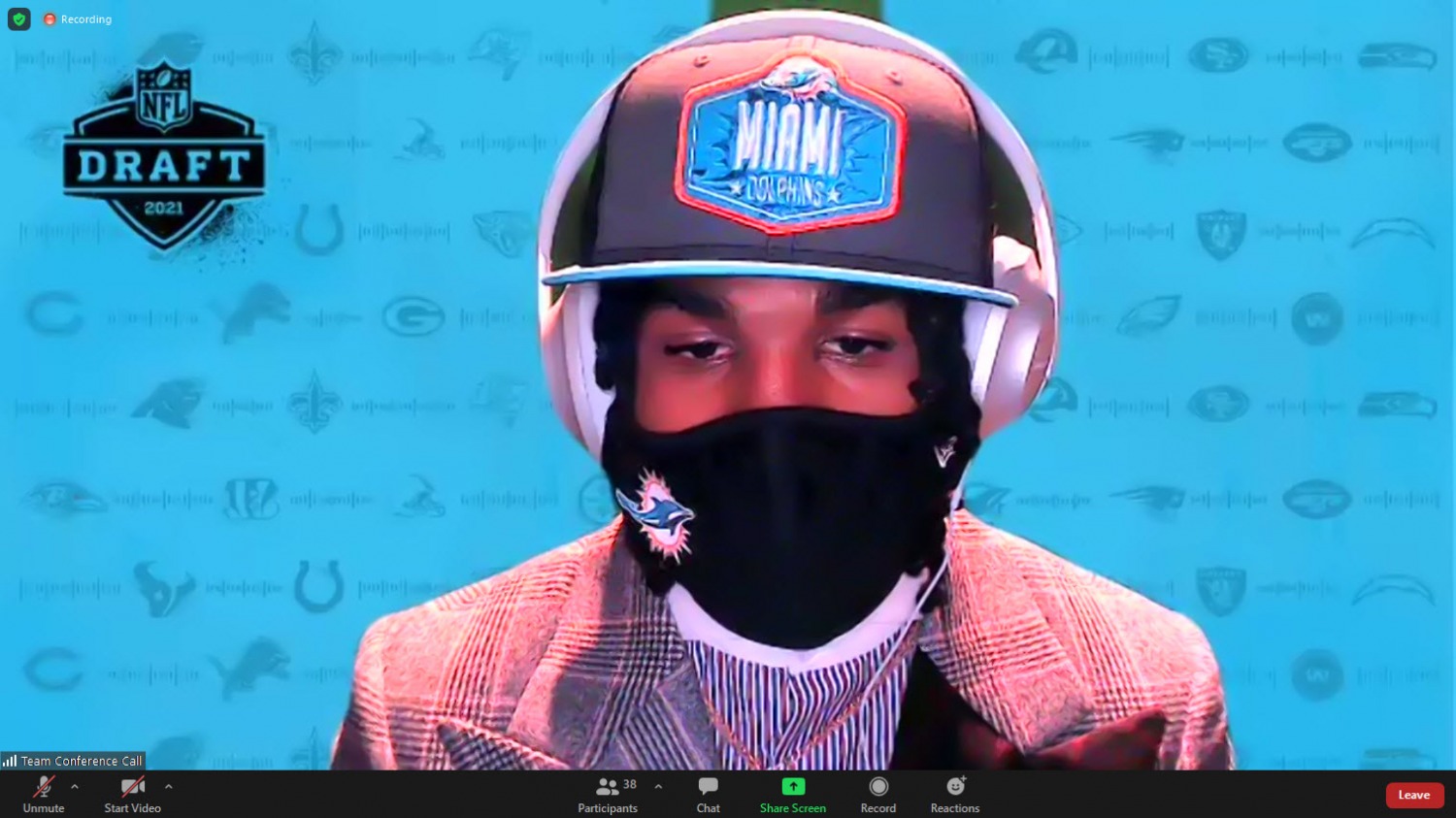 Yesterday, Chris Grier, Brian Flores, and both of the Miami Dolphins’ first-round draft picks met with the media to discuss their overall feelings and emotions. They answered a wide variety of questions ranging from pre-draft targets to medical history and everything in between. Sometimes, however, the biggest takeaway from all of this is what they didn’t say. Here are five takeaways from yesterday’s Miami Dolphins press conferences.

Jaylen Waddle hears the Tyreek Hill comparison, but he wants to be his own player

“Yeah, I get a lot of comparisons to Tyreek (Hill), just because of my small size and being able to be a runner; but I want to be my own player and try to play the game that I play and try to do my own style and not try to emulate someone else’s style. So I think I’m going to try to be the player that I always have and try to make plays for the team, and just try to put the team in position to win.”

Translation| Tyreek Hill is a game-changing wide receiver, the most explosive wide receiver in football. But I’m Jaylen Waddle, and I’m going to make my own mark on this wonderful game.

Chris Grier on concerns about Jaelan Phillips love for the game

“Brian (Flores), myself, the coaches, the scouts – we spent a lot of time through the pre-draft process getting to know him. And I think the one thing when you watch him play, you would never question his passion and effort and stuff because he plays 100 miles per hour and he’s got a tremendous motor and effort, and you can tell football is very important to him. I think like any person, when you’re that young going into college and doing stuff and maybe hit a little bit of adversity there, I think it’s just maturing and growing. I think watching him over his career, he was one of the top players in the country in high school and just watching his growth over the last few years as we got to know him, we felt very comfortable with it. On film, there’s no doubt that this guy loves football, so we’re very excited to have him.”

Translation| Jaelan Phillips is a supped-up race car who loves football. He’s a young player that’s continuing to develop and will only get better. We have a vision for him on this team and expect him to make an immediate impact. Keep doubting him.

Jaelan Phillips is stoked to be staying in the 305

"i owe a lot to this city. i'm so excited to come back and play here for as long as i can. it's amazing. it's an amazing feeling." – jaelan phillips.

“My tenacity and my hard work. That’s something I can really hang my hat on. I’m going to come in Day 1 and just do the most that I can for the team. Just come in, be a humble servant, really just come in just ready to soak up everything, be a sponge and just put my head down and work. I want to earn the respect of my teammates and my coaches, first and foremost, so I’m just excited for this opportunity. It’s crazy. (laughter) I keep saying that, but I can’t even believe it. This is insane.”
Translation| The Dolphins just got themselves a BAMF, who will come in day one and put his head down and work. Picture the scene from Game of Thrones where Oberyn Martell thinks he beat the Mountain. Jaelan Phillips, with hard work and dedication, could be the mountain. Crushing opposing quarterbacks.

Trying to think of all the points I've been raising in favor of Jaylen Waddle the last couple of weeks, between our @3YardsPerCarry podcasts and yesterday's @5ReasonsSports draft coverage broadcasts. But I'll start with this:

I had him ahead of Ja'Marr Chase. And so did Miami.

Chris Grier and Brian Flores, when asked why they chose Jaylen Waddle over the other wide receivers in this year’s draft class

Chris Grier | “I think with Jaylen – we’ve watched him over the years. He’s been a dynamic, explosive player even from his freshman year there. He just flashed and you saw stuff, and I think this season demonstrated that type of player and even last season. He’s contributed there every year. We love his athletic ability, his run-after-catch, obviously the speed; but it’s also his toughness. He’s a very competitive kid. He loves ball. It’s important to him. I think you guys see how he plays. He plays with passion and energy, and so as Brian (Flores) and I and the coaches and scouts were going through it, this guy has been someone that’s caught our eye and it’s not just this year. This is someone that we’ve had our eye on for the last couple years just watching him.”

Brian Flores | “I would echo those sentiments. Obviously we watched a lot of Tua (Tagovailoa) last year. In doing that, we saw really all the players at Alabama and (Jaylen) Waddle was somebody who definitely stood out as a receiver, as a returner, just a really good player. And then getting to know him was – that kind of, I would say, confirmed a lot of the things we had heard. We just think he’s a very, very good player, a good person and somebody who would fit our locker room.”
Translation| If we wanted another wide receiver, we would’ve stayed at #3. Jaylen Waddle is an explosive playmaker. A game-changing playmaker that can score every time he touches the football. He’s also one hell of a person, and we couldn’t be happier that he is on our team.”

This article was written by Josh Houtz–who is very happy with the first night of the draft. Follow me on Twitter….and buy this shirt!

Answering Your Questions on the Miami Heat
Scroll to top