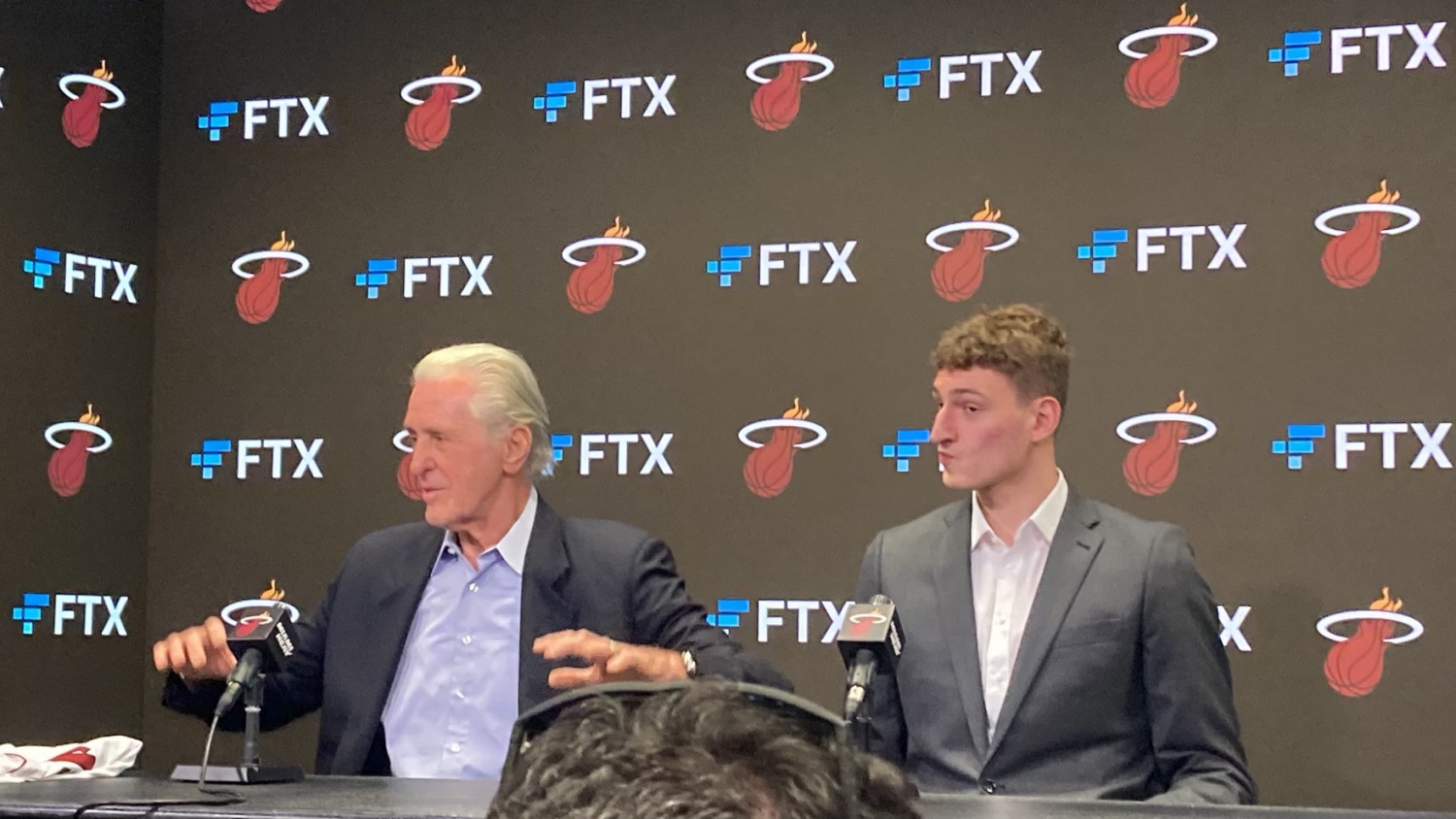 “What happens in Vegas, stays in Vegas” is the famous saying about Sin City. But when we’re talking about Summer League basketball, what happens in Vegas can determine whether or not you have an NBA job next season. Myself and Tony Schwartz will be in the desert to cover the Heat during the Vegas Summer League so stay tuned for more updates this weekend. Here’s a quick look at the Heat’s roster heading into Vegas:

Nikola Jovic – After a slow start, Jovic shined in the Heat’s win over the Warriors on Tuesday. As expected for the 19 year old rookie, the game seemed to fast for him at times. His 25 point (5/7 3PT) and 9 rebound explosion showed the promise that Miami drafted him for. It’s just one game though, so continuing to show growth in Vegas where the competition level will rise is important momentum heading into his first season in Miami. For more on Jovic, check out Brady Hawk’s film breakdown.

Haywood Highsmith – Highsmith had a solid showing at the California Classic – averaging 10.7 PPG, 8.3 RPG, 2.0 APG and 1.7 SPG. Most importantly, he showed the shooting ability that should keep him on the roster (41.7% on 4 attempts from behind the arc). While I’ve listed him on the “guaranteed” tier, Highsmith’s contract becomes fully guaranteed on July 15th so keep an eye on that date to see if any of the prospects below (or on another team) might impress enough to steal his roster spot.

Omer Yurtseven – One of the stars of last summer’s team, Omer has yet to appear as he competes with the Turkish National Team. He is expected to be in Las Vegas but may not actually appear in any of the games. If he does suit up, it would provide the Heat an offensive hub and rebounding threat that does not exist on the rest of the roster. Players returning to summer league for the second year usually stand out – so best case scenario is Omer appears to “not belong” in this setting.

Mychal Mulder – After a disappointing California Classic, Mulder will likely need to show shooting progression to maintain his two-way spot. He had the “green light” from Malik Allen to fire from behind the arc, averaging nearly 8 three-point attempts per game. But to be labeled as a “shooter” and only connect on 21.7% over three games is not promising. I believe he will shoot better in Vegas, but at 28 years old, what is his upside beyond shooting?

Javonte Smart – Smart also was not overly impressive in the California Classic. In the first two games, Smart averaged 12.5 PPG, 3.0 RPG, 4.0 APG, and 1.5 SPG. While he finished 5th overall in scoring during the showcase, his 27.3% field goal percentage and 21.4% three point percentage leaves plenty to be desired. The Heat’s offense did not break 70 points in either of

Smart’s two games, and without him Tuesday, the offense was much more efficient, powered by Allman Jr. and Bouyea at point guard.

Kyle Allman, Jr. – After three games in California, you could argue Allman has been as good as anyone not on a guaranteed contract. With a few good games in Vegas, he could be the favorite to push into the two-way conversation. After going undrafted and spending three seasons overseas, the soon-to-be 25 year old Allman brings a mature game at point guard. His athleticism brings rim pressure that is scarce on the current Heat roster. He averaged a team-best 6 assists per game in California, highlighted by a 10 assist game against the Warriors on Tuesday. While creating for others, he also contributed 9.0 PPG and shot 35.7% on nearly 5 three point attempts per game.

Jamaree Bouyea – I spoke about Bouyea in my Draft Preview article and he fit the description in the California Classic. Like Allman, they have downhill ability to get into the paint with their athleticism. Bouyea 6-7 wingspan has been on display with craft finishes and as an active defender. Bouyea finished the three game showcase with 13 points and 6 assists against the Warriors. While his shooting leaves plenty to be desired, his all-around point guard skills have emerged as someone who could compete with Smart and Allman Jr. for a two-way roster spot.

Orlando Robinson – While Allman Jr. and Bouyea have shined at the guard position, Robinson has emerged as the Heat’s best interior player – averaging 8 points and 6 rebounds in California. At 6-11, 244 lbs, with a 7-4 wingspan, his measurables stand out. He’s more Kelly Olynyk than a traditional center, displaying promising passing and perimeter shooting abilities in college. He isn’t an elite athlete like Bryson Williams, but his skill level is much higher. If Omer returns to play in Vegas, it will diminish his minutes significantly but he should still have an opportunity to show his potential to stick around with the Heat on an exhibit 10 or two-way contract.

Bryson Williams – While I don’t necessarily think Bryson is someone who will steal a two-way spot, I think he’s a strong possibility for an exhibit 10 contract. Physically, Bryson might be the most imposing athlete Miami has outside of Bam Adebayo. At 6-9, 237 lbs, with shoulders that barely fit inside of a standard door frame, he has drawn comparisons to a young Udonis Haslem

by David Thorpe on the True Hoop podcast. His stats didn’t jump off the page in the California Classic, only 3.5 PPG and 1.5 RPG, but he seemed to display the grit Miami loves. As a developmental prospect, I’d personally love to see him stick around in Sioux Falls this season.

Marcus Garrett – Last summer, his game-changing defensive abilities earned him a two-way spot on the Heat’s roster until he was replaced after midseason wrist surgery. Garrett is still recovering and his availability in Vegas is still in question. If he suits up, he would immediately be impactful on defense. The question will be whether he’s grown on offense over the past year to compliment his strengths. The Heat obviously saw something in him last summer, so he’s someone to keep an eye on regardless if he’s able to play this week.

Jamal Cain – Only appearing in one game (8 PTS, 5 REB, 3 AST, 3 STL) in California, the sample size on Cain is limited. Greg Sylvander reported that Miami had interest in him pre-draft, so he is someone who we should keep tabs on. The athletic scorer will have to show more in Vegas in order to push himself into the conversation of making the real roster.

Jalen Adaway – Only averaging eight minutes in his two games in California, Adaway has a pretty limited statistical profile. However, his athleticism guarding full court, attacking the glass, and seemingly playing harder than everyone else on the floor could be something to watch in Vegas. He’ll need more minutes in order to make a significant impact and make the roster, but he could be someone to store in Sioux Falls and develop.

Bryce Hamilton – Another player who has had limited opportunities so far, but Hamilton was solid on Tuesday with 9 points and 7 rebounds. He led the Mountain West in scoring last season, so if he can capitalize in his minutes in Vegas, he could be someone to monitor for Sioux Falls this season.

Aaron Wheeler – Did not appear during the California Classic.

Sign up for Prize Picks using the code “five” and get your initial deposit matched up to $100. 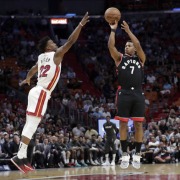 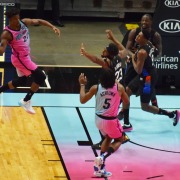 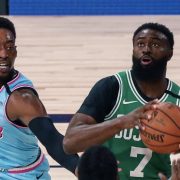 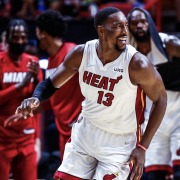 How Will Inter Miami Line Up With Alejandro Pozuelo?

5 Takeaways from the Marlins Series Split vs. Angels
Scroll to top