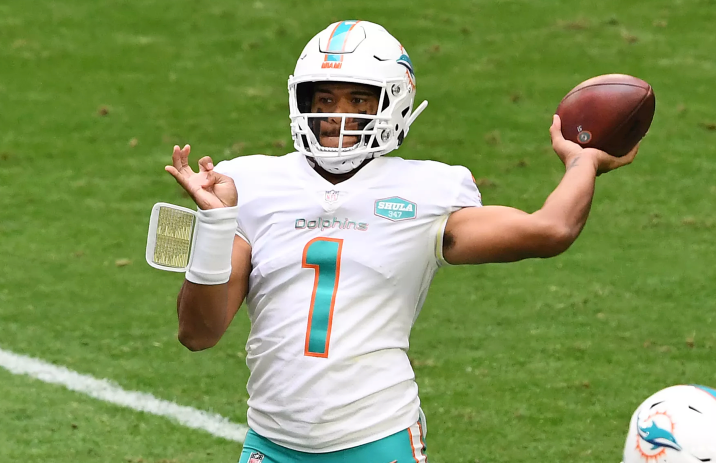 Coming off a thrilling 34-31 victory against the Arizona Cardinals, your Miami Dolphins are hosting the Los Angeles Chargers and Justin Herbert. In a matchup of top 10 picks from this past draft, we put our 4-game win streak on the line as we head into this late 4 o’clock Sunday game. Without further ado, lets dive in.

One of the more impressive and least spoken aspects of the Cardinals game was that we were down 5 coaches including QB coach Robby Brown. Somehow, we were able to manage and had the healthy remaining coaches filling multiple roles. A great example is TE coach George Godsey who was forced to tap into his past experience and coached both the TE and the QB. The reason I bring this up is because on 11/12 we were forced to put 3 players on the Covid-19 List, WR Matt Cole, Christian Wilkins and Kyle Van Noy. Wilkins and KVN are integral parts of what we do on defense and we will need another creative effort by Flores and company to still succeed short-handed as we did last week.

There are many things that are foundational standards in the Patriots style of defense that Flores has brought down south. One of the most important ones is that young QBs get the kitchen sink thrown at them, with most of them drowning in the process. I expect something similar to occur on Sunday. I believe that the Defense will step up to the plate with a game plan that will include a lot of exotic coverages, blitzes and a concerted effort to give Herbert an idea of what the coverage is pre snap to only change to the actual coverage at the snap. Ogbah, Lawson, AVG and others will run the 0 Blitz we are gaining notoriety for and will frustrate Herbert all afternoon long.

A key part to not just this game but also the rest of this season is which young skill position player around Tua will step up. I talked in length before the year that if any combination of DVP, Preston, or Gesicki get hurt, we would pretty much be fried. Well as Preston goes to IR and we see that DVP has been fighting injuries all year, we will need to get contributions from others. This week presents a premier opportunity for players like Malcolm Perry, Lynn Bowden Jr, Salvon Ahmed and perhaps even Antonio Calloway once he is officially on the active roster. I appeared on onside radio on Tuesday and spoke about how elite QBs will mask a lot of the warts that a subpar supporting cast can bring, and I expect Tua to that with the pieces this year before the reinforcements arrive next year.

3 offensive dominated Head Coaches in a row and so far, we have come up 2-0 in those matchups as a whole. Flores’ defense can be considered to be 1-1 and coming off its worst performance as a defense all year. Knowing that I expect Flores to have his troops on point and disrupting the Chargers offense from the first snap. Flores last week being down 5 coaches, showed his flexibility and creativeness to adjust on the fly and that may be needed this week depending on how Covid testing goes the next couple of days. Now I am not predicting another scoop and score on the first drive, BUT I do feel confident in predicting that the defense will come up with at least 3 turnovers in the game and in the process give Tua a short field on multiple possessions.

You may have gotten to the bottom of this and are questioning why I would did not bring up Herbert vs Tua. Let me explain, the narrative that Tua and Herbert have to prove which one is better or which team made the right decision is only pushed by 2 groups. The media which rightfully so finds creative ways to attract viewers and insecure Chargers fans who need validation that Herbert is in fact better than Tua. I fall under neither of those categories as I am firm in my conviction that although early, if Tua can stay healthy, we have found the savior to lead us back to the promise land. Having said that, I do expect this game to be a very competitive game that will force Tua to grow even more from last week. We were able to beat Arizona with a larger portion of the playbook compared to Tua’s first start vs the Rams; I expect an even larger part to be opened up to Tua with larger stats to follow.

So without further ado, The All-Wiggle Tape for Tua Tagovailoa pic.twitter.com/6876B5o2sY

Im so excited to bring you this analysis. I am here to show you a couple plays of why this Dolphins team, organization and city should be buzzing because we have finally solved the 2 decade long question of who will lead the Dolphins back to national relevancy. Tua Tagovailoa. pic.twitter.com/gOX3exlHpz

Overall with the Chargers traveling from the West Coast (we have seen what that does to teams in the past) and a rookie QB going against a Flores coached Defense, I expect a hard-fought victory that we will lead throughout. Flores will attack and show Herbert things that he has probably never seen first-hand in his life. Look for the 3 turnovers I mentioned earlier to lead our Miami Dolphins to something of the tune of a 27-13 victory, adding another game to the win streak and getting one step closer to the playoffs (Miami Dolphin playoff talk in November! 2020 is a crazy year). Till next time guys, Fins Up!