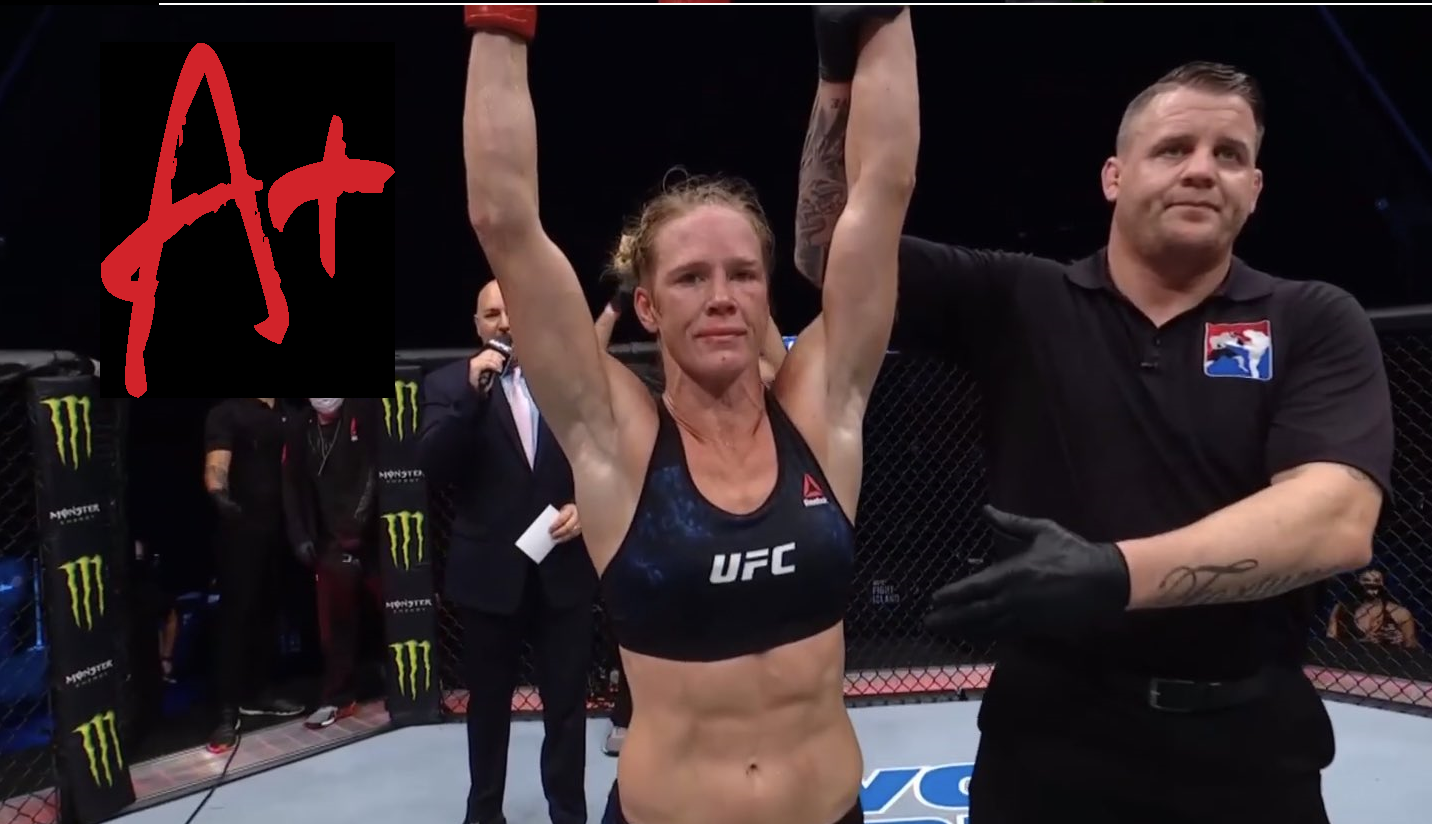 UFC Fight Island 4 underpromised and over-delivered. Imagine you go in to ask your boss for a raise and not only does he give you a raise but he also gives you a promotion. Yeah, that was what this fight card was like. Fresh blood was spattered all over this card with many UFC fighters still in the rookie stages of their career. Some bled well, while others not so much. Who delivered a perfect performance and who failed to deliver? Find out below:

Review: Holly Holmes came out and executed her game plan perfectly. With Aldana’s strength being her boxing, Holly circled out of the way and used the teep kicks and side kicks to the body to push her back out of range. This gameplan allowed her to stay on the feet and dictate range only allowing exchanges when she wanted. On top of that, she was able to take her down each round and in this position Aldana looked helpless. It was a perfect fight for her winning all 5 rounds. Congratulation Holly Holmes.

Review: Aldana showed her lack of experience in this fight heavily. The inability to cut Holly off in the ring as she circled and to adjust to the sidekicks exposed her weakness of being able to adapt mid-fight. Irene is a great competitor and potentially a future title challenger but tonight just wasn’t her night. She was inches away from being TKOd as the 5th round ended. She had the best takedown defense coming in but Holly exposed this part of her game being able to take her down 5 times. Aldana has time to grow and come back from tonight’s lackluster performance.

Review: For someone who said they love watching the Diaz brothers fight, Carlos definitely showed flashes of their gamesmanship in the fight. Whether it was taunting or open hand slapping his opponent, he paid his dues. This was a good, but not great win for Carlos. He definitely showed an edge in hand speed and aggression but his technical skills weren’t polished as yet. At just 26 he has lots of room to grow and sharpen his tools.

Review: I was thinking of giving him a higher grade since he did win the first round but after him doing absolutely nothing in the third, I decided he didn’t deserve it. Yorgan has not looked good in his last two fights. He seems to burn out his gas tank by midway of the fight. At this point, he does an offensive line move and just pushes you up to the fence to get a break. With another loss, he might be on the chopping block. If he is able to increase his cardio or lose some fat he should be able to increase his chance at longevity.

Review: It seems like the only person that Germaine de Ranamie doesn’t look good against is current champion, Amanda Nunes. She seems to wipe everyone else. This fight was no different. She came out and in round 1 used her striking to perfection. Round 2 is why that “A” has a “-”. She was able to be taken down and did take some good ground and pound until she was able to get up. In the third round, Pena was the aggressor but this is where preparation meets opportunity. Pena gives her neck up and De Randamie ends it all for her.

Review: Julianna Pena came out and it was clear that her stand up game wasn’t on the level of Germaine. She was able to land shots but they were few and far between. In the second round she was able to impose her will. She was able to take de Randamie and down and start to control the fight in her realm. Unfortunately for her, she was unable to dominate top position. GDR was able to reverse the position and almost secure a von flue choke. In the 3rd round Pena gave up top position into a guillotine that put her to sleep. If Julianna is able to increase her striking, she would be much more competitive as a fighter. Right now she’s too one dimensional but if she’s able to improve her stand up game, she would be a much more competitive fighter and certainly one more worthy of a title shot at that point.

Kyler Phillips vs Cameron Else

Review: This kid continues to deliver. At only 25 years old he goes out there and stops an opponent who was riding a 6 fight win streak. He showed an edge on the stand up game and once he was able to get the fight to the ground he showed dominant there too. Early in the second round he gets the early takedown, takes his opponents back and reigns down elbows for the TKO win. Keep your eye out for this kid,

Review: It’s always hard making your UFC Debut on only 9 days notice. For Cameron Else this fight really showed his lack of preparation. He came out like a deer in headlights and seemed to struggle to find his range. Unfortunately for him he was not prepared for the ground game and struggled to work position. He also seemed to have a lack of cardio. For Else making your UFC Debut on this note isn’t the best impression but hopefully with some more time to prepare he will come back stronger.

Review: Dusko really looked good in this fight. Honestly it should’ve been over in the first round but Dequan took the most knockout shots that I’ve seen and still stayed up. Dusko showed his ability to utilize his full arsenal of skills wether it be stand up or on the ground. When he took the fight down, he completely outmatched and was able to deliver the ground and pound TKO. Now at 10-0 it’s time to make some noise

Review: Dequan came in having good knockout power and lots of experience under his belt. He was able to use it in some ways to keep the fight competitive initially but unfortunately when he was on his back, the power from Dusko was too much. For Townsend he has now lost his 4th straight and might’ve lost his spot in the UFC. Hopefully he get some wins outside and come back more polished.

Review: The former Interim UFC Welterweight champion came out and really turned a new page in his career. After losing 8 of his last 10, he seemed to have a performance where he put all his experience to good use. Winning by decision showing good striking and footwork showed his growth as a fighter this late in his career. Good dub

Review: Court showed good heart in this fight. He came in and would land some strikes but not at the volume that Condit did. He didn’t dictate pace and took a knockdown at the end of the 1st that if there was 10 more seconds he wouldve been TKO’d. Definitely showed heart making it to the end but definitely left more to show.

Review: He seemed to have won the fight but this is a tough draw for him. He did win the first two rounds but it was interesting to see them give a 10-8 to Culibao in the 3rd

Review: He was able to make a comeback in the 3rd round and did impose his will. Showed good heart after clearly losing the first two to come back and get himself a draw. In the words of “The Hybrid” Niko Price, “Its not a loss!!”

Review: You can say what  you want about the kid but he refused to go down. Showed incredible heart and durability

Review: Nassourdine was able to outlast the early flurry from Williams and delivered some nasty shots that should’ve knocked him out. Great fight from him.

Review: Loma was absolutely dominant in this fight. Her Muy Thai clinch with her knees and elbows just rocked Frey and it wasn’t even close.

Review: Just did not look good. Got outstruck 3-1 and didn’t dictate pace at all.

Review: Kenney is a rising star in this sport. His body kicks were nasty and delivered a masterful performance

Review: Props to him for lasting that long with all the nasty body kicks he was taking. He showed an ability to take a shot and was able to keep the fight competitive.

Review: Wow! What a finish by Vendramini. He was able to get Ayari backing up and then delivered a beautiful head kick that put him down.

Review: He was unable to get anything going and getting KO’d in the first round shows that you got some growing to do before you can hang with the big leagues.