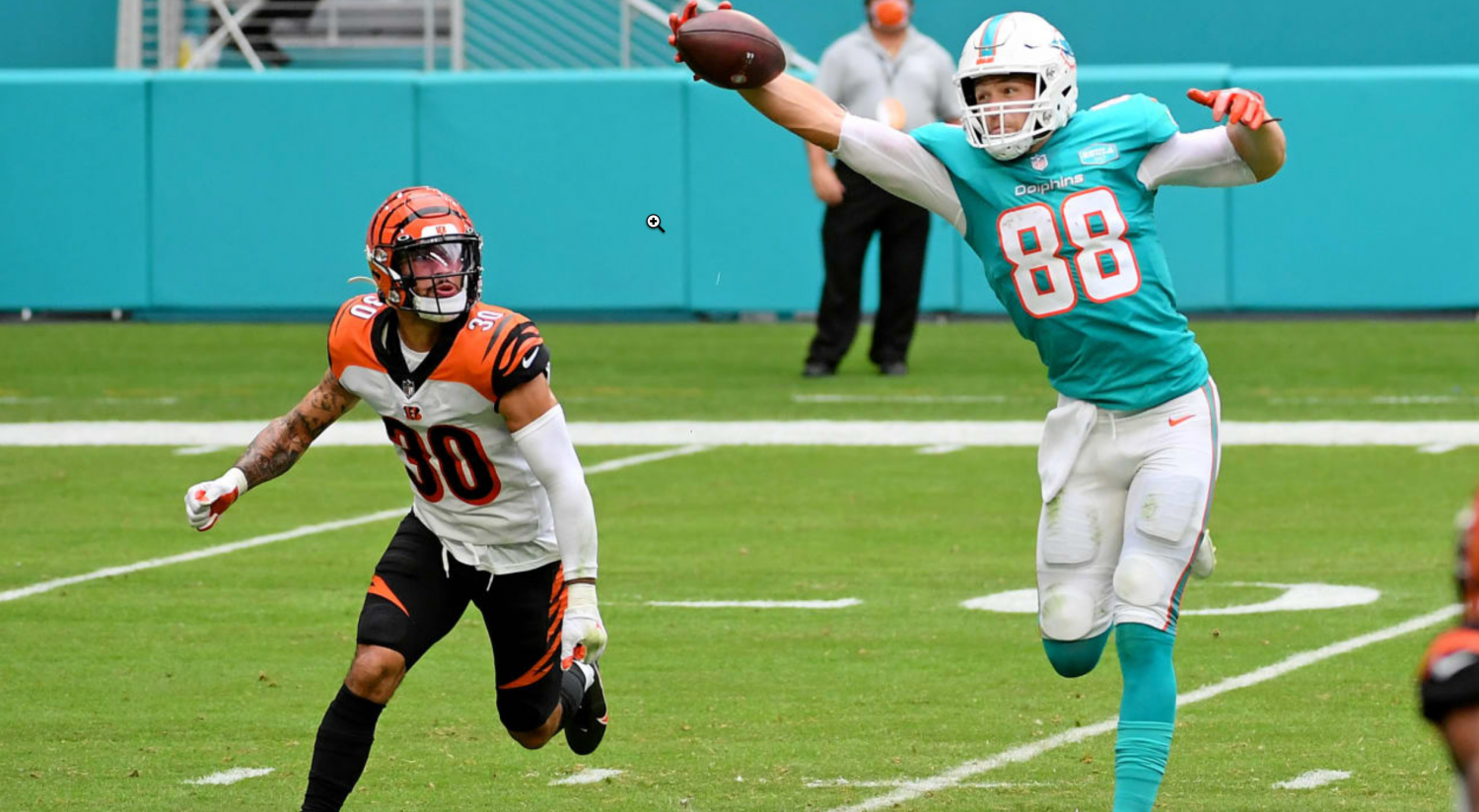 Stock Up & Stock Down

Welcome back to another installment of Stock Up & Stock Down. In Week 13 of the NFL season, our Miami Dolphins hosted the Cincinnati Bengals and came out on top with a score of 19-7. A closer game than the score shows, we had to fight both literally and figuratively for our W to get us to 8-4 for the first time since 2003. With so much to dissect let’s dive right in:

Who would have known that Mike Gesicki was allowed to be a focal point of the offense with Tua at QB? Whether it was a lack of chemistry between Tua and Mike or if it was a lack of calling plays with Gesicki being the number 1 option, the weeks with Tua at QB always made him feel like a distant second option when in reality DVP and him are our best offensive players at the present time. Exacerbated more after Devante got ejected, we fed Gesicki to the tune of 11 targets for a career high 9 catches 88 yards and 1 TD. As I mentioned during our live stream & post game, Mike and DVP are our most impactful offensive weapons and we need to get them involved early and often moving forward to have any chance to beat teams that can score the ball like the Chiefs and Bills.

Going into the game we were down Breida, Washington, Ahmed, and activating Myles made me feel like we were going to struggle mightily but Myles had different plans. All afternoon Myles was able to gain positive yards before popping a long one for 26 yards that unfortunately ended in a fumble. Myles also was able to show some chemistry with Tua on the first drive of the second half as he scrambled, Myles immediately went up field (as you should) and Tua hit him in stride for 35 yards and a first and goal. The catch ended up being our most explosive play of the day.

I must admit that by the end of the game I was shocked to see that Kyle had got 3 full sacks by himself. KVN has turned it up in recent weeks after missing a game due to injury. Kyle was everywhere on the field all afternoon as the ultimate chess piece for Flores and the stats definitely back that up. 8 total tackles (all of them solo!), the 3 sacks, 5 TFL, and even 1 PD. KVN was a complete beast and someone we need to play at this level to have any sort of chance against the Chiefs.

The first half of the game can probably go down as one of, if not, the sloppiest first half in Coach Flores tenure as the Miami Dolphins Head Coach. The whole team played out of character as Tua was inaccurate, the defense wasn’t its usual dominant self, penalties that never get called and finally an ejection of Xavien Howard, left me concerned heading into half time down 6-7. What I would have paid to have been a fly in the locker room as I’m sure Flores chewed every and anyone out. The results were immediate as the first drive resulted in a TD by the offense and a lead we would not give back. Obviously, the talking point of the game is that Coach Flores ran across the field to let Zac Taylor know how he felt about the second catch interference by the same player that resulted in his return man getting hit with no defending himself. The fire that Coach exhibited for his players (even calling them his kids postgame) really does more than people think because it shows the players that their leader is someone who will go to war for them. Which wall you want me to run through coach?

Skipping right into the final drive of the first half, I believe we finally saw Tua and Gailey get into sync together. Tua really showed a level of comfortability running a more up-tempo brand of football that I struggle to think why it even took so long to get to that. Coach Flores obviously saw the same thing I saw as I’m sure he told Gailey to run more of that tempo because on the first drive we got right back into it and never looked back the rest of the game. Tua spent most of his afternoon targeting Gesicki with 11 and DVP with 8. He also finished 4 yards shy of hist first 300-yard game but who cares, we’re here for wins not stats (lol)

My biggest disappointment of the game has to be the continued futility in using Jakeem Grant on offense. At some point it begins to feel like square peg into round hole where it just doesn’t fit and doesn’t work. As talented as Jakeem has been with the ball in his hands, the problem has always been actually getting it into his hands. Jakeem also has a couple of young pups snarling for his PT in Lynn Bowden and Antonio Calloway. When do we stop forcing it and just let Jakeem be great at what he is, an elite Return Man with some gadget style plays on offense.

Seems kind of ironic that we are talking about RedZone Offense being an issue, but we were able to move the ball fairly well all afternoon long but uncharacteristically couldn’t punch it in. Whether it was 3 straight runs within 5 yards, or a plethora of inaccurate fade throws we need to see more from Gailey and the playbook. Hell, special teams showed more creativity at the goal line than the offense did!

Overall, we took a huge step forward on Offense and hopefully is something we can build on. This team is starting to build a certain aura for itself that really makes you root for them as they exhibit a camaraderie that is infectious and shows from the head coach to the last man on the roster. Looking forward, we have the Kansas City Chiefs and Patrick Mahomes coming in to play at 1pm (for now) and for us to have any chance we will need a solid week of practice, a great game plan, and excellent execution. Till next time, Fins Up!

If Bam is the Engine, Jimmy is the Steering Wheel
Scroll to top