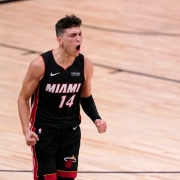 This question definitely seems to vary based on who is answering, but in my opinion yes he is.

Tyler Herro has seemed to be in trade talks all season by Heat fans, but it seems that he’s above most of those deals now. Most of the guys that have been discussed do not display a clear separation between the 20 year old Tyler Herro. Bradley Beal is one that seems to entice Heat fans the most, since he does have clear separation, but is it really worth it?

And once again, my answer is no. Why trade away a key player like Tyler Herro for an all-star, with the highly anticipated 2021 free agency approaching. It seems as if Miami has a real shot at one of the best players in the NBA, in Giannis Antetokounmpo, and can keep their young centerpieces.

In my opinion, this is a no brainer. Tyler Herro is untouchable.

#BugBrady IMO I think Christian Wood is the go-to this offseason. The fact that he can be a shooting threat from 3 is enough for me, let alone everything else he can do. Your thoughts on Christian Wood joining Miami?

I absolutely agree. I discussed Christian Wood in an earlier piece, since I truly think he’s the perfect fit next to Bam Adebayo.

For starters, many believe that since he’s an evolving young player, he will be searching for a 3 year deal instead of a 1 year deal, but I’m not exactly sure that’s the case. He seems to be pretty adamant that he wants to win, which ultimately raises young player’s stock. Guys like Devin Booker and Karl-Anthony Towns don’t get as much recognition as they should, since ultimately they never have the ability to play on the big stage. A guy like Paschal Siakam had a great championship run with Toronto and ultimately proved his worth. That’s just the way it goes.

But to the actual fit itself, I think Bam and Wood could not only be a great front-court for the future, but also for this upcoming season. Christian Wood proved this season that he has a respectable three ball, and can be an absolute havoc around the rim due to his length. His motor actually seems a lot like that of Bam’s, which is why it’d be so interesting to see this big man duo.

Christian Wood to Miami seems like a pretty ideal fit for both parties.

Would you want James Harden with the Heat knowing you would probably have to give up Tyler and Duncan? #BugBrady https://t.co/o1c22F0Lea

Many may disagree, but I really don’t think I would. Obviously James Harden’s abilities to score the basketball are second to none, but is that what this team needs right now? This team just turned the corner on a new era for Miami Heat basketball, which has fully represented culture and team chemistry. They have a group of guys who truthfully enjoy playing and being around one another, and they got to the NBA Finals doing just that.

I’m not saying that a big three of James Harden, Jimmy Butler, and Bam Adebayo would not make some major noise, but they’ve gotten this far building this team exactly how they wanted, so why take a chance and revert back.

Tyler Herro seemed more comfortable in the post-season at 20 years old, than James Harden did in year 11.

And once again, they can keep both Duncan Robinson and Tyler Herro, and grab an even better player in 2021 free agency. That seems to be the route they’re leaning towards. And if they don’t land Giannis, then you think about making the huge move. 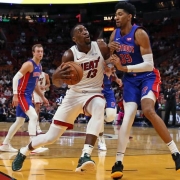 There has been a lot of speculation about what Miami can do this off-season via trades or free agent signings. A lot of big names have come up, but is that exactly what Miami needs right now?

A Christian Wood signing may seem a little unrealistic, but it’s not out of the picture.

For one, there’s a low chance that Detroit will let Christian walk, since he’s still evolving and has great upside. He will also be searching for a 3-year deal, which is something that Miami won’t look to offer. But once again, if there’s anyone that could pull it off, it’s the Miami Heat.

It’s also pretty obvious that the only young stars who get recognition are those on winning teams. Even guys like Karl-Anthony Towns and Devin Booker don’t get the recognition they deserve since they are on such low seeded teams. But Miami could fix that for Christian, since it seems as if winning is a priority right now…

The only issue that Christian seems to have is that he’s a bit scrawny for the center position. But what better team than the Miami Heat to get your body in the best possible shape.

He shares some similarities with Bam Adebayo, since he is 6’11 who plays like a guard at times. He’s an energetic force on both sides of the floor, who uses his length to his advantage. He’s also a good screen setter and floor spacer. This could definitely take some weight off of Bam’s shoulders.

And now to the Miami Heat’s point of view. Miami could clearly use another big, especially since Bam had such a burden throughout this run since nobody could replicate some of the things he does. And well, Christian could do some of those things, even stretching the floor to shoot the three ball. That also means that Miami could insert both of them into the starting lineup, which also deepens Miami’s depth.

If Miami had a Christian Wood to come off the bench in game six of the NBA finals when Bam was struggling, I have no doubt that Miami would’ve pushed it to seven.

I remember being cut from a team in China for.. “Not being good enough” .. #JustWait

Obviously this is all speculation, but he could just fill so many holes on this current Heat roster. And once again, Detroit letting him walk does not seem like a viable option for them.

Miami may not need a home-run signing right now. Instead a guy like Christian Wood may be the better fit.