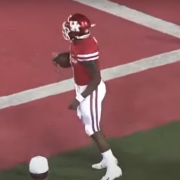 The Miami Hurricanes have named their starting quarterback. To perhaps nobody’s surprise, D’Eriq King has been made the starter for the upcoming season.

King came to the Miami hurricanes in January, after four successful seasons at Houston. While in the Lone Star State, he was sensational. His best season came in 2018. That year, he recorded 2,982 passing yards, 36 touchdowns, and six interceptions.

King redshirted last season in order to preserve a year of eligibility. He split reps with  N’Kosi Perry, Tate Martell, Tyler van Dyke, and Peyton Matocha during the four spring practices Miami had.

A native of Manville, Texas, King will bring a dynamic playmaking ability to the Miami Hurricanes. In what has been a revamped offseason for the program, they appear to be in much better shape.

Now, they will look to contend for the Coastal Division. After a disappointing 2019 season, Manny Diaz and the coaching staff worked hard this offseason to try and revamp the program.

Here’s to hoping that the moves they made will lead to success. In particular, they are performing well in recruiting. They are building a solid foundation that’s should lead to sustained success in the future.

After not getting a ton of consistent production from the passing game last year, all eyes will be on King as he looks to bolster the Miami passing attack. His ability to run with the football as well as his strong arms should open up a lot of opportunities for the Miami offense.

King’s play style fits very well in the modern game of college football. No longer is it just about running the ball and controlling the clock.

Football is becoming an offensive game. King’s arrival with the Miami Hurricanes should help the program keep up in the wild world of college football.

After much anticipation, quarterback D’Eriq King is officially a Miami Hurricane.

The Miami Hurricanes have addressed a major issue at quarterback, as D’Eriq King will enroll this week.

Timing was crucial as he had to enroll by Tuesday in order to participate in Spring practice.

King sat out all but four games last year after choosing to redshirt to save his last year of eligibility.

In 2018 while with the Houston Cougars, King set the AAC total touchdown mark with 50 scores (36 passing 14 rushing).

Those 36 passing touchdowns came against just six interceptions, and King put up those numbers despite missing nearly three games with a knee injury.

King’s dual-threat capabilities will be utilized heavily in Lashlee’s offense.

Miami has once again utilized the transfer portal to their advantage, having also signed kicker Jose Borregales from FIU.

Rumors of King’s arrival swirled after his two day visit to Coral Gables this past weekend but uncertainty still loomed as nothing was made official until Monday.

The Hurricanes have addressed major needs at quarterback and kicker, along with perceived upgrades on the coaching staff.

Manny Diaz has started to right the ship of public perception somewhat, first with the Lashlee hire and now with finding a new dynamic signal caller.

Expectations are once again high after a disastrous ending to the past season.

It will be interesting to see how all of these new additions mesh in what may no longer be perceived as a rebuilding year.

That sure happened fast. 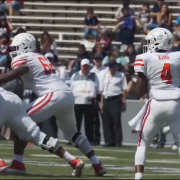 The Miami Hurricanes will have a big-time visitor this weekend. Former Houston quarterback D’Eriq King will take a two-day tour at the University of Miami, beginning Friday.

King would be eligible to play right away and that would be great news for Miami. He is just one of three quarterbacks with 35 passing touchdowns and 13 rushing touchdowns in a season.

As noted in a report from Andrew Ivins, a recruiting guru who is a regular contributor to the 5 Rings Canes podcast on the Five Reasons Sports Network, the quarterback has been talking with Miami offensive coordinator Rhett Lashlee.

King is exactly what the Miami Hurricanes need

This would be a much-needed upgrade for the Miami Hurricanes. Poor quarterback play has plagued them throughout the last couple of seasons. King would have a chance to add stability to the program for at least two seasons. He has two seasons of eligibility remaining.  Perhaps even more exciting, he would be eligible to play right away.

Miami is going to have to compete with other big-time schools for King. LSU, Oregon, Arkansas, and Ole Miss have also been on his radar. The Hurricanes certainly have their work cut out for them when it comes to battling with other teams for King.

King would provide an instant splash to the Miami offense and would electrify a passing game that is struggling at the moment. Not only that, it would be the first big development for Lashlee since joining the staff. It would certainly provide a jolt into the Miami quarterback room, and would make the ACC a lot more interesting come the fall.

Download the 5 Rings Canes podcast for more, wherever you get your podcasts.