The Miami Hurricanes have named their starting quarterback. To perhaps nobody’s surprise, D’Eriq King has been made the starter for the upcoming season.

King came to the Miami hurricanes in January, after four successful seasons at Houston. While in the Lone Star State, he was sensational. His best season came in 2018. That year, he recorded 2,982 passing yards, 36 touchdowns, and six interceptions.

King redshirted last season in order to preserve a year of eligibility. He split reps with  N’Kosi Perry, Tate Martell, Tyler van Dyke, and Peyton Matocha during the four spring practices Miami had.

A native of Manville, Texas, King will bring a dynamic playmaking ability to the Miami Hurricanes. In what has been a revamped offseason for the program, they appear to be in much better shape.

Now, they will look to contend for the Coastal Division. After a disappointing 2019 season, Manny Diaz and the coaching staff worked hard this offseason to try and revamp the program.

Here’s to hoping that the moves they made will lead to success. In particular, they are performing well in recruiting. They are building a solid foundation that’s should lead to sustained success in the future.

After not getting a ton of consistent production from the passing game last year, all eyes will be on King as he looks to bolster the Miami passing attack. His ability to run with the football as well as his strong arms should open up a lot of opportunities for the Miami offense.

King’s play style fits very well in the modern game of college football. No longer is it just about running the ball and controlling the clock.

Football is becoming an offensive game. King’s arrival with the Miami Hurricanes should help the program keep up in the wild world of college football. 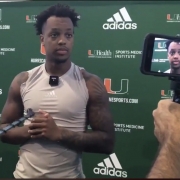 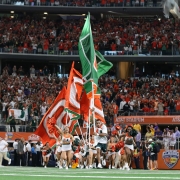 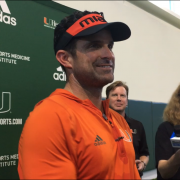 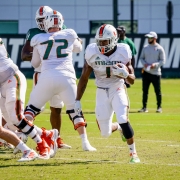 And it won’t stop: DE Davis becomes commit #21 for Canes