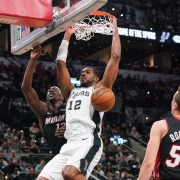 Instead of discussing more of those trade possibilities, involving who gets sent out of Miami and who could be on their way in, it’s important to take a look at the buyout market. There may be a need to sign some certain shooters, such as JJ Redick if Duncan Robinson or others are included in a deal, but let’s take a look at the one player on everyone’s mind.

It seems as if LaMarcus Aldridge will get bought out by the San Antonio Spurs, which many have speculated that Miami would be a front-runner to sign him. Now, although I want to dive into him as a fit primarily, it must be noted that there is a major need for any type of bigs, and not just as a Bam Adebayo sidekick.

If the Heat were to trade for a guy like Kyle Lowry, Precious Achiuwa and Kelly Olynyk would most likely be included, meaning that Miami’s bigs would consist of Adebayo and Chris Silva, which is less than ideal.

So, although this may not be as fun as discussing the major improvements a shot-creating guard brings to the table, Aldridge may be able to bring the final element following the trade deadline at 3 p.m. tomorrow.

– The obvious element: a mid-range game

When talking about a team that is currently struggling from beyond the arc, adding a mid-range threat may not be the worst thing. It’s interesting to discuss the fit next to Adebayo, since he’s also a player that finds himself inside the arc as the guy the offense runs through.

The main difference is that Adebayo play-makes and runs sets in those spots, while Aldridge looks for shot attempts. It could create an intriguing balance when they share the floor, as well as defensive adjustments incoming when they interchange.

It seems as if praying for three balls to drop on any particular night is not the best offensive scheme, and diversifying the personnel a bit with an Aldridge type to compliment another acquisition may be the perfect choice.

– A stretch big, important above the break threat

Aldridge is currently shoot 36% from three this season, and it’s not just by making the occasional short corner triple. He will most likely find himself as that corner spacer frequently when sharing the floor with Adebayo, but the ability to make the above the break triples is a huge asset.

The growth in attempts is another positive sign, since he went from three balls being a rare thing to skyrocketing to 3 attempts per game over the past two seasons. It’s important for veterans to develop this skill organically as they age, since it becomes a crucial aspect when discussing the longevity of a player, especially bigs.

Now, this play is a perfect example of how Aldridge would be able to thrive in a Heat offense. As seen above, DeMar DeRozan drives baseline while collapsing the defense, as Aldridge floats to the free throw line in the dead spot for an ideal jumper.

The reason this is important is when you replace Derozan with Jimmy Butler on this play. It’s widely known that Butler’s downhill gravity is an elite attribute, due to his methodical movements at the basket and capability to get to the free throw line with ease.

This creates yet another interesting aspect for Coach Erik Spoelstra’s play designing, since these type of possessions almost always end up in a three-point attempt, which could change Miami’s philosophy slightly.

Aldridge gives Miami a much more trusted pick and pop action, but there a few extra elements to this importance.

For one, the reason Lowry and Victor Oladipo are such valued players for Miami is since they lack those on-ball threats who make a simple PnR and other sets more effective, since Butler is the only trusted guy who can consistently do that for this team. So, an attacking Lowry makes the Aldridge acquisition even more valuable, while sticking him around a bunch of shooters wouldn’t be the best situation.

The second part of these pick and pop sets is the ability to run them with Adebayo as the ball-handler. It’s not ideal for defenses to have their power forward and center defending on the perimeter, which makes this action even more effective against switch heavy schemes. Miami tries to run a lot of stuff like this with Adebayo and Kelly Olynyk, which may not look much different, except a bit more trust when it’s a savy vet like Aldridge.

The non-Butler minutes are continually harped on with this Heat team for obvious reasons, and Aldridge may give Miami some different looks in those minutes. Now, this is not to say that he will be carrying offensive sets while Butler’s on the bench, since that is far from what I’m saying, but it’s all about those extra options to prevent stagnant offense.

Miami’s motion offense clearly leads to a bunch of back-cuts and things of that nature, but a guy that is capable of backing down a mismatch, as the rest of the team clears out, allows their usual motion to be even more of a threat.

Once again, this dive into Aldridge should not be twisted into any thoughts of this acquisition changing things for Miami dramatically, since it’s just about the minor improvements that’ll make the difference. And besides, a guy off the buy-out market isn’t expected to provide immediate and major changes, since that is what the trade market is for, which will continue to be explored over the next 24 hours. 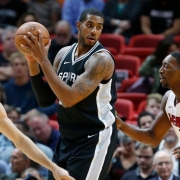 There have been some rumblings about the possibility of LaMarcus Aldridge being traded to the Miami Heat.

There’s not much to dive into about contract stuff, since he’s going into the last year of his deal. I’ve discussed what that means to Miami in past articles when dealing with a guy with an expiring contract. But what I want to look at now is how he would fit with this current team.

To start off, when the Spurs were shopping Aldridge before the deadline, they saw Miami as a possible destination for him, which makes this more interesting.

And even though Miami seemed to be pretty dominant throughout the playoffs, teams were constantly trying to eliminate their threes. That obviously led to Jimmy Butler and Bam Adebayo attacking the basket.

Something I mentioned during those stretches was that Miami would need to begin to take the mid-range jumper. That is just something a three point shooting team must do to be successful. For instance, the Golden State Warriors took advantage of that mid-range when they were chased off of the three, which is why Klay Thompson and Stephen Curry improved in that area.

But what better way for Miami to improve that area than to get one of the best mid-range shooters in the game.

LaMarcus definitely gives a little flavor to Miami’s offense with that area of his game, but does he actually compliment Bam Adebayo?

Bam’s length and quickness on the defensive end could really help LaMarcus out on defense, since he’s been playing next to Jacob Poeltl, which means limited movement.

And ultimately, I believe that he actually hurts Miami more than he helps them. Obviously he’s a savvy veteran who can find his spots on the floor, but I don’t believe that is what Miami needs right now.

They need a big that can stretch the floor with a respectable three ball, be active on the boards, and can protect the rim a bit. And clearly, you wouldn’t be getting that from Aldridge.

And since the league is becoming smaller and smaller by the year, you must have bigs who can at least move around. The speed of LaMarcus on the defensive end doesn’t seem to be enticing as well, which won’t be improving at the age of 35.

I do believe there’s a case to be made that he can help a bit, but I don’t think it’s the best fit, especially since there are so many options this off-season.

Miami is currently whale hunting, and I don’t believe that LaMarcus Aldridge is the biggest fish in the sea.