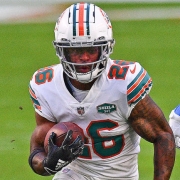 POTENTIAL HOT TAKE: The Cheesecake factory is one of the most overrated restaurants!

Their menu has what seems like hundreds of entrée options and none of them really blow you away. Instead of specializing their entrée’s and creating some signature dishes, they decided it would be best to have a bunch of options to make give everyone a choice, but they all are mediocre at best.

The Miami Dolphins running game has sort of become the Cheesecake Factory of NFL backfields.

The backfield currently consists of five running backs with very similar skill sets and body types. The problem is that none of them truly excels. At least that is what it seems like 11 games into the season.

Let’s look at their stats:

Anybody stand out to you? No? Didn’t think so.

There is no consensus on which of these running backs is best. Throughout the season each running back has had moments where you got excited and want to see more but then they fumble, allow a sack, or drop a crucial pass.

The Dolphins, under Flores and Grier decided that a Cheesecake Factory like approach to their backfield was their best bet. Instead of investing heavily in one running back, the Dolphins decided to spread the wealth and hope that one of them was the answer.

Gaskin was a seventh-round draft choice, Breida was acquired for a fifth-round pick, Washington was traded for mid-season, and Ahmed and Laird were both undrafted.

None of these options cost much in terms of resources, and it shows in the performance of the run game each week.

At this point in the season the Dolphins are contending for a playoff spot, and no one has a clear picture as to who the lead back is. I’d argue that the Dolphins aren’t even sure as proven by the constant rotations and minimal running in the Jets game.

I would give Washington the most touches as he is a better pass blocker and seems to have a bit more wiggle to his game, but he is currently limited with a hamstring injury. Due to the injury, and just the way Flores likes to run his team, I expect the lead running back will be a fluid situation featuring whichever running back practiced best that given week.

The Cheesecake Factory approach, when it comes to running backs, has not uncovered a gem for the Dolphins so far this season. Now, we just have to hope that one of the five guys will be enough to help keep our offense moving forward, and our quarterback standing up long enough to make it to the playoffs. 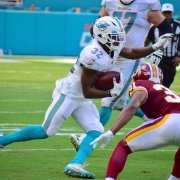 Heading into the 2019 season, it seemed as though Dolphins’ RB Kenyan Drake was in-line for a bigger workload in Chad O’Shea’s offense.

Unfortunately, that did not happen.

And despite playing second-fiddle to Kalen Ballage throughout much of the offseason, he still remained the most explosive player on Miami’s offense. Truth is, he was not only the team’s best RB between the tackles, he had the most value as a pass-catcher and in a NE-style offense, this was just as important.

Prior to Miami’s 43-0 loss to New England, Fox Sport’s Jay Glazer reporter Drake asked for a trade, which angered the 25-year old RB.

Reports from Drake and ‘sources’ around the team suggest he never asked for a trade, and wasn’t overly concerned with what the future entailed. But all of that has changed in recent weeks. And with the emergence of Mark Walton as the heir apparent and current RB1, trade rumors have once again started to circulate.

What can Miami expect in to get in a trade?

Which begs the question, what would it take for the Dolphins to part ways with the RB most known for his improbable run that will forever be remembered as the ‘Miami Miracle’?

Sources: The #Dolphins have had trade conversations with teams centered around RB Kenyan Drake, and the team has indicated they would trade him if the right offer presented itself. Drake, who has had no extension talks with Miami since camp, would welcome a new opportunity.

Ideally, a player of his skill set and youth would fetch a third-round pick. Unfortunately, the Dolphins are unlikely to see a team part with a day two pick. After all, if reports are true, Miami already tried to lock Drake up long-term. And if he is indeed on the trade block, the price tag may be too rich for any team long-term.

So what is fair compensation?.

Personally, I think if a team offers the Dolphins a fourth-round pick, Chris Grier would be ecstatic. This should also appeal to the handful of teams that need a RB. A RB that has the skills as both a runner and pass-catcher.

In the end, no one knows if Drake will be traded before the October 29th deadline. But what we do know is his future in Miami is bleak. And for a front office looking for every and any, opportunity to land draft capital, it would be in both sides interest to strike a deal.

Time will tell, but for now it appears Kenyan Drake’s days in Miami are numbered.

Josh Houtz (@houtz) is a die-hard fan of the Miami Dolphins, and will miss Kenyan Drake if traded.