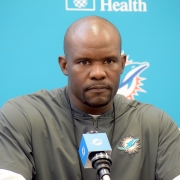 The Miami Dolphins once again find themselves in the middle of a scandal. Late Tuesday afternoon, reports were confirmed that former Dolphins head coach Brian Flores is suing the NFL in a federal class-action racial discrimination lawsuit.

Per the lawsuit, owner Stephen Ross is at the center of the issues in Miami. Flores alleges that Ross offered 100k per loss incurred in 2019.  Also, Flores calls Ross out for trying to make him violate league tampering rules to recruit an elite level QB to Miami. That quarterback is – according to reports by the Palm Beach Post’s Joe Schad – Tom Brady. Brady, obviously, went on to sign with the Tampa Bay Buccaneers instead.

Beyond the Dolphins, Flores implicates the Giants and the Broncos. The lawsuit alleges that the New York Giants had already chosen Brian Daboll as their head coach before Flores had the chance to interview for the job. Texts from New England Patriots head coach Bill Belichick are cited, congratulating Flores for earning the job when the texts were intended for Daboll.

Here are the texts: pic.twitter.com/WjdLNRxfO1

As for the Broncos, Flores states that then-GM John Elway and President Joe Ellis arrived an hour late to the interview, extremely hungover. This indicated to Brian Flores that the Broncos never took him as a serious candidate before they hired Vic Fangio, who is white.

Flores was still considered a finalist for the Houston Texans job before filing this lawsuit. In doing so, he may have destroyed any potential he had to coach in the NFL again, as he may be viewed as a pariah now. However, Flores soon issued a statement after the news broke, stating he understands the implications. He is also prepared for any potential consequences.

Brian Flores acknowledges this lawsuit could put his career in jeopardy, but says in a statement that he is taking on systemic racism in NFL: “the need for change is bigger than my personal goals” pic.twitter.com/xsJiaRPZH9

Flores’s lawsuit could rock the NFL to its very core. This will undoubtedly lead to an investigation and many, many lawyers will be involved given the seriousness of the implication. Reports are coming out that other minority coaching candidates could potentially join Flores in his cause. They can testify their own experiences in interviewing for jobs. Jobs they knew they would not get.

This sort of situation is precisely what the Rooney Rule – which mandates that all NFL teams must interview at least one minority candidate for job openings – was supposed to prevent. However, it seems to have only exacerbated the issue.

Naturally, the accused parties are pushing back against the accusations. The Miami Dolphins issued a statement refuting Flores’s claims against them.

Statement from the Miami dolphins pic.twitter.com/OCpKuN3d19

The New York Giants and the NFL as a whole sent out similar statements.

#Giants statement in response to Brian Flores’ allegations in the lawsuit he has filed. pic.twitter.com/MClyCkfVv0

From a broader standpoint, the entire NFL will have its hands full for the foreseeable future. Many have accused the NFL for not seriously considering minority candidates for decades. Now, this lawsuit will put the league under an uncomfortable microscope.

This situation will be watched carefully over the coming weeks.  It is yet to be determined how potential coaches or even players will respond to this scandal. 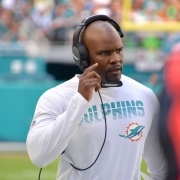 In a stunning turn of events, the Miami Dolphins fired head coach Brian Flores one day after the franchise secured back-to-back winning seasons for the first time since 2002-2003. Jay Glazer of Fox Sports speculated that Flores could be on the hot seat after failing to make the playoffs. He also stated that the franchise would be very short-sighted to do so.

Now, they have done so.

Statement from the Miami Dolphins. pic.twitter.com/Lh1WaAIRY9

According to ESPN’s Jeff Darlington, the firing has nothing to do with the recent availability of Michigan coach Jim Harbaugh. In fact, Darlington claims the Dolphins aren’t even looking at Harbaugh to be Flores’s replacement. Instead, the firing has much more to do with the fact that Flores’s relationship with owner Stephen Ross and GM Chris Grier rapidly deteriorated over the course of the season.

Reports did periodically arise from various sources that Flores was difficult to work with. He has a tendency to come across as the smartest guy in the room, and that attitude sometimes grated on people. Also, reports indicate Flores was fired after refusing to comply with a request to make changes to his coaching staff.

Stephen Ross says there wasn’t enough collaboration between different levels of the organization. Sounds like there wasn’t alignment between Flores and the front office. pic.twitter.com/pGfC4c0lCk

On the other hand, Flores knew how to motivate his players. After going on a 7-game losing streak, he managed to turn the team around and put them on a 7-game winning streak. Unfortunately, he couldn’t lead them over the must-win game against the Tennessee Titans. That knocked them out of the playoffs.

Darlington also reports that the relationship between Tua Tagovailoa and Brian Flores had deteriorated. It got so bad, they did not speak to each other. It was obvious that Flores did not trust Tagovailoa. So, essentially, the decision to fire Flores is an implied commitment to Tagovailoa.

Brian Flores went 24-25 as Miami’s head coach, and he will likely be a very strong candidate for one of the other openings around the league. If he doesn’t become a head coach, he will definitely be a defensive coordinator. Now, the Dolphins will spend the beginning of this offseason looking for someone to fill that void.