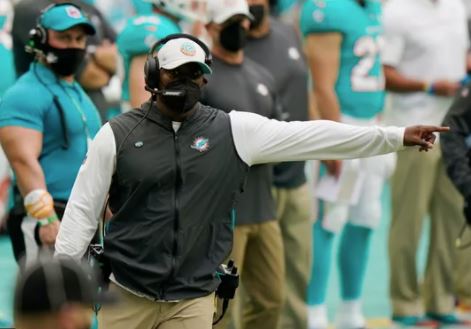 Now that the season has come to a close, it’s time to break down what are the main improvements the Miami Dolphins need to make this offseason. As always, there’s a long list that needs checking off, but there are certain things that have more priority than others. This column will break down the main things Miami needs to do to ensure that next season doesn’t end on the same sour note this one did, being on the outside looking in.

Later on there will be a position-by-position breakdown detailing every single move the team should make, in this writer’s opinion. But for now, here’s a generalized primer that fits the bill no matter who Miami’s QB is.

It’s time to face facts. No matter who is in charge, no matter how many draft picks are invested, the Miami Dolphins simply can’t seem to develop solid offensive linemen. The talent is lacking, and the cohesion as a unit is nonexistent. Coaching is a big part of that. However, there is a simple solution. Do what the Kansas City Chiefs did: buy an offensive line.

According to Spotrac, Miami will have more cap space available than any team in the NFL. That leaves plenty of room for the Dolphins to go on a major spending spree, which should be spent almost entirely on the offensive line. There are some solid left tackle options, as well as some top level veteran guards.

It’s time to give the Dolphins QB – whether it’s Tua Tagovailoa or someone else entirely – an offensive line that isn’t among the absolute worst in the league.

This front office stood on the podium at the end of the 2021 offseason and said they were happy with Myles Gaskin and Salvon Ahmed. Their only real addition was Malcolm Brown, who has spent a large portion of the season injured. It became clear that Gaskin and Ahmed both have real shortcomings as running backs.

Then the Dolphins brought in UM superstar Duke Johnson off the street. He looked much better than either of them. Then the Dolphins added veteran Phillip Lindsay, and he looked better as well. It does not bode well for talent evaluation when two free agent veterans come in midseason and prove to be the superior options.

This season has shown just what kind of a difference even a marginal improvement at running back can do. Two seasons in a row, Miami has opted to ignore the running back position. They cannot do so again. An improved offensive line will definitely help, but all around the league, running backs are making names for themselves. Their offenses are reaping those benefits.

3. Keep the defense together

No question about it. Brian Flores has put together a championship caliber defense. But that means the Dolphins need to do whatever it takes to keep the core together. Emmanuel Ogbah, Elandon Roberts, Nik Needham, and Xavien Howard. They all need new deals in the offseason, and it behooves any GM worthy of the title to make sure these impact players stay in Miami.

Back in 2016, an article was written on phinmaniacs.com regarding whether offense or defense was more important. The research showed some startling results.

Let’s start at the year 2000, that’s a decent place to start right? 16 Super Bowls have been played since then, and of those 16 winners, 10 of them have had a top 10 offense. Ok, now looking at the defense, it would appear that 11 of those 16 teams had a top defense. Again, pretty evenly matched.

So let’s tighten things up again.

If the Miami Dolphins want to keep any positive momentum, the defense needs to be held together. It’s so rare to reach this kind of plateau on the defensive side of the football. Just keep the existing pieces in place, and the rest of the resources can be used to upgrade the offense.

Miami’s painfully slow start can arguably the real reason they aren’t in the playoffs this season. The Dolphins lost a lot of games they had no business losing during their 7-game slide. It took them too long to get back to the style of defense they used last season, and it took them too long to work out other bugs in their fundamentals.

The best way to avoid repeating that mistake is to establish a veteran presence this season. Brian Flores decided it wasn’t important in 2021, but hopefully in 2022 he’ll realize his mistake.

Experience doesn’t need to be incredibly expensive. There are a lot of aging veterans that can be had at reasonable prices. WRs DeSean Jackson or A.J. Green, DE Calais Campbell if he doesn’t retire, OLB Melvin Ingram was given a hard look earlier this offseason. There are veterans to be had that can impart some knowledge and still play an active role.\

5. Assistant coaches must be improved

More than anything, this is on Brian Flores. But there’s no way to know if this is likely to happen. Miami’s assistant coaches, particularly on offense, have little to no pedigree. And it shows. Lemuel Jeanpierre, the offensive line coach, has only been an NFL coach for four seasons including 2021. He’s never been an OL coach before, and that shows as well.

It all makes sense now.
The question asked;
"what improvement have YOU SEEN from the oline this year".
Honestly after watching this I'm SHOCKED Tua hasn't been killed yet. His boss listens to this incoherent rambling EVERYDAY & says to himself, "this is the best guy". JFC!🤷😂 pic.twitter.com/EXYKgrQ2ec

Flores needs to find a veteran offensive line coach. Perhaps he can drag Dante Scarnecchia out of retirement for a year, just to get things on track and train a successor in the process. Or, with the recent firing of Vic Fangio, maybe Mike Munchak will shake loose and Flores can make a play for him to fix things up.

Speaking of veterans, it would be coaching malpractice for Flores to not look at some new potential offensive coordinator candidates. The Carolina Panthers are going to interview the likes of Jay Gruden and Bill O’Brien to take over for Joe Brady, who was fired on Dec. 5.

Or, perhaps, Flores can consider Brady for the OC position. He learned under Sean Payton as an offensive assistant, and then was credited with helping Joe Burrow become a superstar at LSU. Perhaps, Brady can help Tua Tagovailoa – or whoever the QB in 2022 is – to find some success with a new offense that will create some excitement.

Brian Flores has to know that the product on the field this season was not good enough. If even one of those games – the Jaguars, the Falcons, the Colts – ended in a win instead of a loss, the Miami Dolphins would likely be in the playoffs. Better coaches get better results, and there are some good ones looking for a new home. He has to try and upgrade from what he has on offense.

Stetson Bennett IV can reach NFL status with a national championship for Ge...

The Undeniable Rise of Caleb Martin
Scroll to top