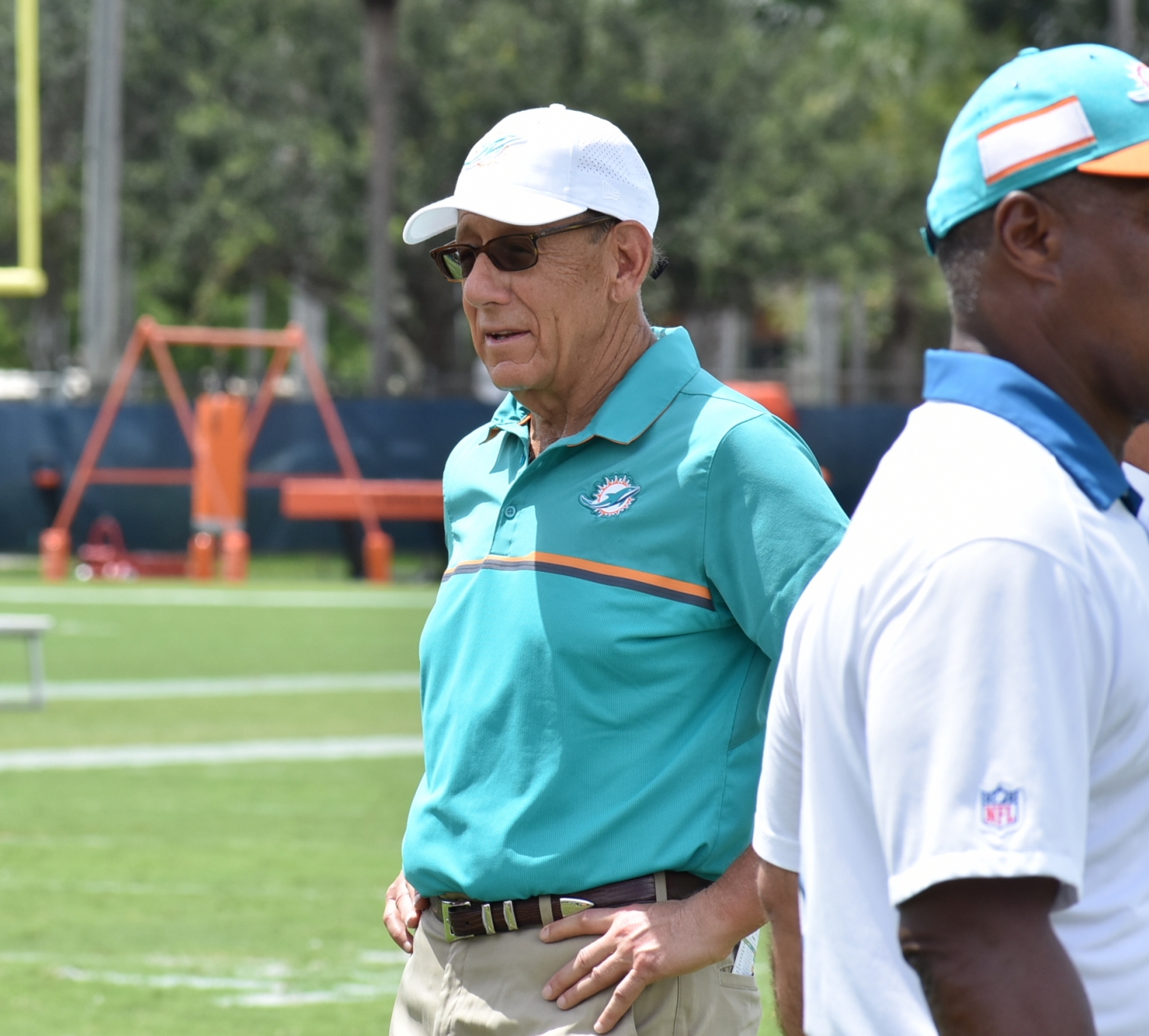 It’s been 26 years since the Dolphins had a coach, Don Shula, that can lead this franchise to multiple playoff berths and in contention for the Lombardi trophy.

It’s been an endless cycle since 1995 as the search continues, with the oddmakers all paying attention.

The Candidates to consider:

Daboll, 46, has become quite the hot new name in head coach searches. He is given credit for the sharp upward development of Josh Allen. Daboll was 2020 NFL assistant coach of the year because of it.

He also is a Bill Belichick protégé who has five Patriots Super Bowl rings to show for it. Oh, and he coached Tua Tagovailoa at Alabama in 2017.

Daboll some may recall was Dolphins offensive coordinator in 2011 under Tony Sparano. He did not fail. He lifted Miami’s ranking in points scored from a near-bottom 30th to a near-midpack 20th.

A positive byproduct of this coaching change, if we’re looking for air freshener against the stench, is that it makes it more likely the Dolphins will commit full resources to the development of Tua as their quarterback moving forward.

The Cowboys built on Moore and Dak Prescotts rapport. Moore was Dak’s backup and eventually in 2018 became his QB coach. In 2019, Moore took the helm of the Cowboys offense.

In his first year, Moore presided over the NFL’s top-ranked offensive attack, the second-rated passing offense and fifth-ranked running game. His offense helped ascensd Dak Prescott to finish second in the league in passing and set career-highs in passing yards, completions, attempts and Touchdowns.

Under Moore’s tutelage. Ezekiel Elliot was fourth in rushing yards in the NFL and Amari Cooper had a breakout season.  Moored offensive prowess helped five Cowboys become pro bowlers, with three of them becoming offensive lineman.

Moores impressive resume in a short span says more about the talent on offense and already knowing the Cowboys scheme. If Moore were to get the position he will need a killer offensive staff and question would arise if he could ascend Tua the same way he did with Prescott.

Quinn arrived in Dallas prior to the 2021 season after serving as the head coach in Atlanta from 2015 until 2020.

He was Miami’s defensive line coach for two years before spending the 2007-08 seasons in the same role for the New York Jets.

The big issue coming from Quinn’s tenure in Atlanta was the lack of accountability. When the Falcons messed up on the field, you never saw any anger from Quinn. He would always clap and pat his players on the shoulder after a mistake. Nobody was held accountable, and Quinn would sweep it under the rug.

DeMarcus Lawrence on Cowboys DC Dan Quinn: "To have Dan come here, change the culture & make us think more about the ball, taking the ball away, giving the offense more opportunities to score, it put us in the position that we're in today. Just thankful to have Dan on our side."

Now, Quinn has changed his defensive philosophy in Dallas as it aligns with more of what the Dolphins ran last season with similar personnel.

It is extremely impressive as he put Micah Parsons in positions to win and maximized his ability. Quinn all season has maximized and schematically out his defensive players in successful situations.

Quinn built a really good staff in Atlanta which included Terry Rubisky, Kyle Shanahan, Matt LeFleur and Mike McDaniel. If Quinn becomes the next HC, his offensive staff would be intriguing.

Vance Joseph is the current DC with the Arizona Cardinals and was formerly the HC of the Denver Broncos and the DC in Miami under Adam Gase.

With how Arizona’s defense has performed most of this season and improved over the three seasons he has led it, it was inevitable that he would begin to garner interest.

Joseph, along with Quinn and Daboll have been with the Dolphins as position coaches and coordinators. It feels as if Chris Grier is digging into his past relationships to fill an important need.

No idea who ultimately will get Dolphins job of 6 known candidates, a list that could grow. Person involved in coaching searches throughout league reiterated how much Grier thinks of Vance Joseph. So at very least, he's a serious candidate.Quinn,Frazier, Joseph have HC experience

It is worth noting that in Miami, the Dolphins defense got statistically worse in giving up yards per game and become one of the NFLs most penalized teams when Joseph was the DC.

In Denver, Joseph inherited a top 3 defense and it failed to go back to that. While the offense struggled, it’s not as if Joseph’s defense overwhelmed opponents, despite talent at each level.

In his Broncos tenure, he allowed 22.8 points per game (15th in the NFL), and 104.5 rushing yards (11th), and 58.3 red zone conversion rate (19th). Led by Von Miller and Chris Harris Jr, the Broncos D had their moments, but not enough to carry Denver to the postseason.

Joseph’s offense was dismal. His defense was middle of the pack. What likely sealed Joseph’s fate, however, was consistent coaching errors. Often, Joseph botched late-game situational football, made head-scratching decisions, mismanaged imeout usage, and didn’t put players in the best situation to succeed.

Although McDaniel is the 49ers’ offensive coordinator, head coach Kyle Shanahan calls the plays. McDaniel helps create the game plan and is in charge of the run game

So how did the 49ers do on the ground this season? It’s complicated. They finished seventh in the NFL at 127.4 rushing yards per game, part of an offense that ranked seventh overall and 13th in scoring. Rookie RB Elijah Mitchell was the top rusher with 207 carries for 963 yards and five touchdowns, but he played only 11 games.

It is noteworthy that Mike McDaniel was in contention to be an offensive coordinator for the Dolphins in 2020.

I’ve bought into the Mike McDaniel hype. Let’s do it @MiamiDolphins pic.twitter.com/rIxOkDz9RR

McDaniel is highly regarded around NFL circles. As an intern for Mike Shanahan he was designing plays. While he’s noteworthy for his run game prowess he excels at his understanding of the passing game.

George Kittle asked for it to be written into his contract that McDaniel stays with the 49ers. Former Browns WR Andrew Hawkins said that no other “candidate understands offensive football the way” McDaniel does.

Leslie Frazier, the current Bills Defensive Coordinator, if chosen could continue this defensive scheme and build upon this dominance since 2020.

In 2007, he was appointed as the defensive coordinator for the Minnesota Vikings, adding the title of assistant coach in 2008. During the 2010 season, he became the Vikings’ interim head coach when Brad Childress was fired, becoming their head coach in 2011 and holding that position through 2013.

Frazier’s tenure was marked by an inability to develop a quarterback. This season, he struggled just to choose between Christian Ponder, Matt Cassel and Josh Freeman. Even more damning: Frazier’s defense badly declined in 2013, giving up more points than any team in football.

The #Dolphins have requested permission to interview #Bills DC Leslie Frazier, source said. He also has a slip from the #Bears.

His defense in Minnesota failed to adapt to being flexible and was underwhelming with key pieces being the main problem.

In Buffalo, Frazier was part of a coaching staff that developed CB Tre’Davious White and LB Tremaine Edmunds who were both named to the Pro Bowl, with White also garnering AP First-Team All Pro honors.

To me this feels like an interview request to check off the Rooney Rule. Frazier would be tasked in building on offensive staff. He could bring in Ken Dorsey as the OC but rumors are that Dorsey could go back to his Alma Mater, the Miami Hurricanes.

Who I would want

This comes down to Candidates that are offensive minded coaches that can build an offensive staff that supports Tua Tagovailoa with a competent running game and offensive line, while maintaining the defensive continuity since 2020.

What kind of coach do you want?

I would roll the Dice with Mike McDaniel, who’s had years of experience under the Shanahan coaching tree. The Shanahan style of run game has the perception of being very hard to learn; however, per players on the 49ers roster McDaniel explains it in simplistic terms making it easier for players to understand through a 2 step cadence

They literally invented the INSIDE ZONE TOSS RUN. You can see @JL_Chapman break down the run here. But, it’s pure genius design. pic.twitter.com/4HzJLeLwlK

As for the dreaded offensive line that’s been the league worst since 2019. This current OL needs a veteran OL coach and teacher that can turn it around. Getting Coach Aaron Kromer out of retirement may the best bet of teaching this young offensive line fundamental footwork and techniques to improve their refinement. In his tenure at New Orleans, Kromer sent five OLs to a combined nine pro bowls. In 2009 and 2011, Kromer coached the Saints OL as the best Offensive Line in the league. He joined the Chicago Bears staff helping them become the second best scoring offense in the league. Kromer was part of the Rams Super Bowl 53 run.

As for the defensive side of the ball it would be smart to continue to have the same coaching staff. Keeping Boyer, Alexander and the rest of the position coaches to continue the defensive dominance intact. If the new HC chooses not to, Vic Fangio would make the most sense to continue it.

The Undeniable Rise of Caleb Martin

Five Things That Could Derail The Panthers
Scroll to top