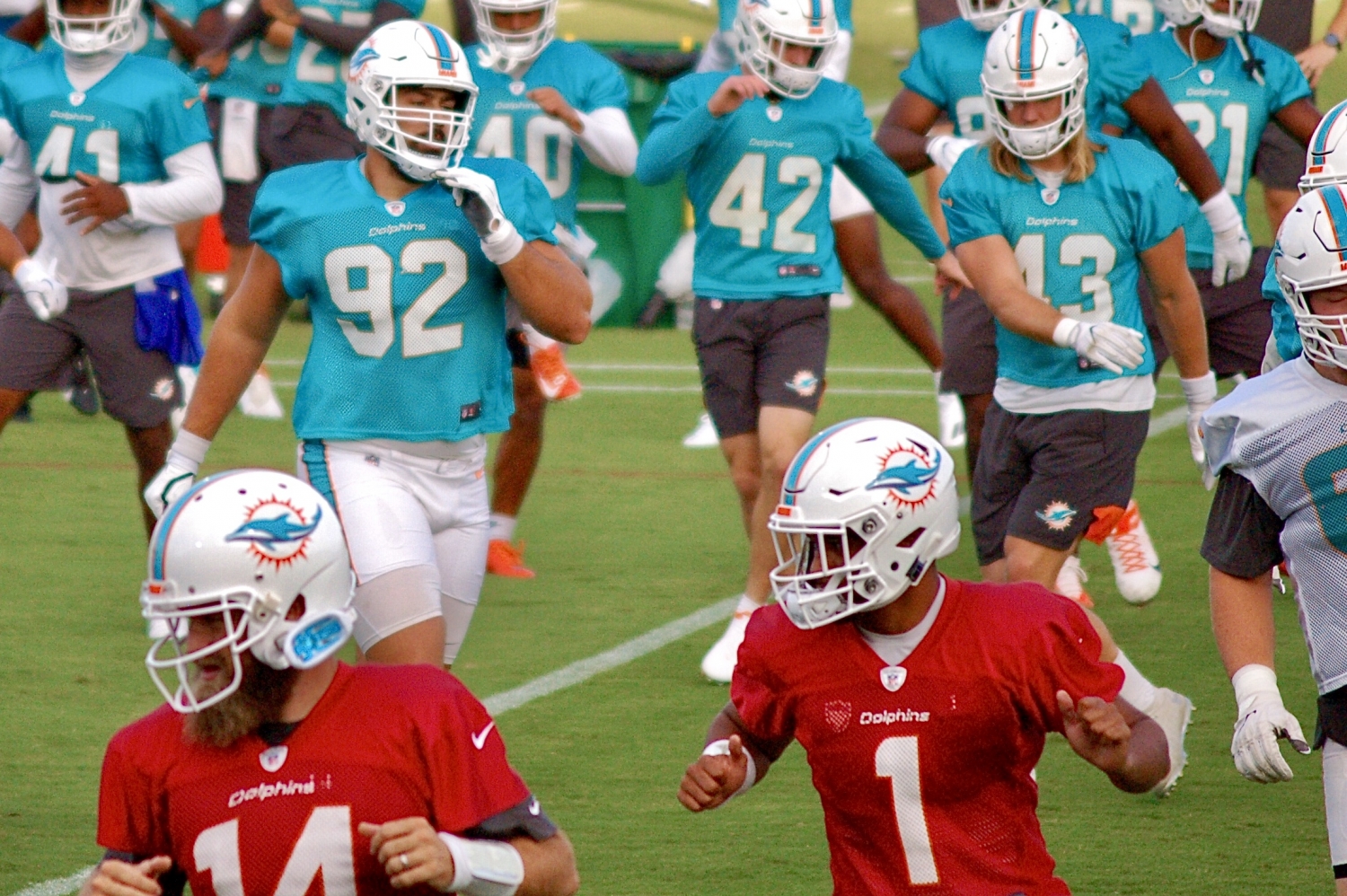 Welcome back to another installment of Stock Up Stock Down. In Week 3 of the NFL, your Miami Dolphins traveled north to take on the Jacksonville Jaguars in a clash of in-state rivals. On primetime television, we took care of business and got our first win of the year with a score of 31-13. There were a lot of positives as well as some things to work on. Let’s dive in and see who raised and who lowered their stock this past week.

It’s getting to be a regular occurrence when we finish the game and see how impressive some of our rookies have been, but this past week it felt like they were of importance to the victory. Without understating how impactful both Austin Jackson and Solomon Kindley have been, I also want to give a lot of credit to Noah Igbinoghene. He, after getting torched all last week,  bounced back with a shut-down game where he didn’t let a pass completed to his intended receiver.

Robert Hunt continues to rotate and has solidified a role on the goal line, and finally, Brandon Jones, who has, from the first game, been impressive and continued his solid play by flying around everywhere. The fact these rookies are biting at such an early juncture of the season is very indicative of what we have uncovered because, as Bill Parcells famously said, “if they don’t bite when they’re puppies, they usually won’t bite.”

One thing I wanted to keep an eye on is how the team would respond to a close defeat the previous week. The team came out as a unit and from the opening whistle, dominated. The first offensive drive had a script which included a plethora of runs to Myles Gaskin, passes to DVP, Gesicki, Jakeem, and then a touchdown to Preston. Starting strong has not been a strength of ours under Brian Flores, so it was good to see the team play and execute to perfection. It’s up to the team to continue this momentum and prepare for a formidable opponent in the Seattle Seahawks.

Coming into this year, I think most people following the Dolphins assumed a rotation of Jordan Howard, Breida, and Laird/Gaskin but boy has Gaskin proven us all wrong. Myles got off to a scorching start on Thursday night when he got 50 yards on the opening drive. Gaskin took a stranglehold on the backfield carries this week, ending up with 22 carries for 66 yards and also tying DVP with five catches to lead the team for 29 yards. In total, we gave Myles 27 touches, which he turned into 95 yards from a player we expected little to no contributions from.

Fitzmagic is back, baby! Fitz did his thing all night long. From running the ball 7 times for an average of 5.8 yards per carry to only having 2 incompletions, Fitzpatrick seemed to be firing on all cylinders. At one point, he started the game 12 for 12, so he was locked in from the opening drive. One thing that is undeniable about Fitz is the amount of love and passion his teammates have for him. It’s never more apparent when you see Christian Wilkins running to celebrate with the offense after every TD.

After another solid week, it seems tone-deaf to even mention Tua, but that’s what happens when you draft a QB at five, and as much as I would love to see Tua play, he will have to earn it and prove to everyone he’s better than Fitz because just going to him for the heck of it, might not sit right with the team as a whole.

This has become too much of a regular occurrence for me to think it only falls on the players. Some may be thinking well the Jaguars did not crack 100 yards rushing total or even got close, and while that may well be true, it doesn’t show that with a 2/3 score lead throughout the game, the Jags had minimal opportunity to run evident by the 42 passes Minshew threw up. Unfortunately, on the few times, they did run, they gashed us each chance. Minshew carried three times for an average of 7.3 yards per carry as well as James Robinson getting 2 touchdowns and averaging 4.2 yards on just 11 carries. Eventually, Coach Flores will have to take a personal interest in fixing this because he was hired as a defensive guru who cannot improve our defense.

It is looking more and more likely that this part of the article will stay here throughout the year. Elandon Roberts looks as lost as any rookie I have seen play. We brought him in as an LB/FB, but with Cox owning the FB position and getting next to nothing from the LB, what did we sign him for? Shaq and Ogbah also have to take some heat because the 2 things they were brought in to do was No.1 rush the passer and 2 stop the run, and after each passing week it feels like those 2 things are next to impossible to ask of them. They have shown nothing through 3 weeks of the season, and eventually, we will have to look at younger players such as AVG, Raekwon, and KGH. FYI KGH and AVG both got sacks.

After the positive response the team gave this week, I did not want to bash the coaching staff too hard, but it still needs to be done. We had an opportunity at the beginning of the 3rd quarter at the Jacksonville 40-yard line, where we had a 3rd and 7 where Myles was only able to get 6. So, on 4th and 1, with the ability to all but end this game by putting it up to four scores, we decide too late in the shot clock run out the offense to line up with 2 seconds left not to run a play but get the delay of game penalty. Some might say I am too aggressive, but when will we begin to see our Return on Investment for all these picks and money we have spent on the o-line. Eventually, we have to believe we are the tough, physical team that Coach Flores wants us to be and go and get that 1 yard to ice the game.

Overall this team grew in the four short days in between the Bills game and the Jags game. We need to continue to work on the things we struggled with and continue what we have already mastered. With ten days to prepare against a tough opponent like Seattle, we will need to be firing on all cylinders to hope to steal one from Russell Wilson and Pete Carrol. Till next time, Fins Up!

Drink It In, Heat Nation: Your Giant-Ass 2020 NBA Finals Preview