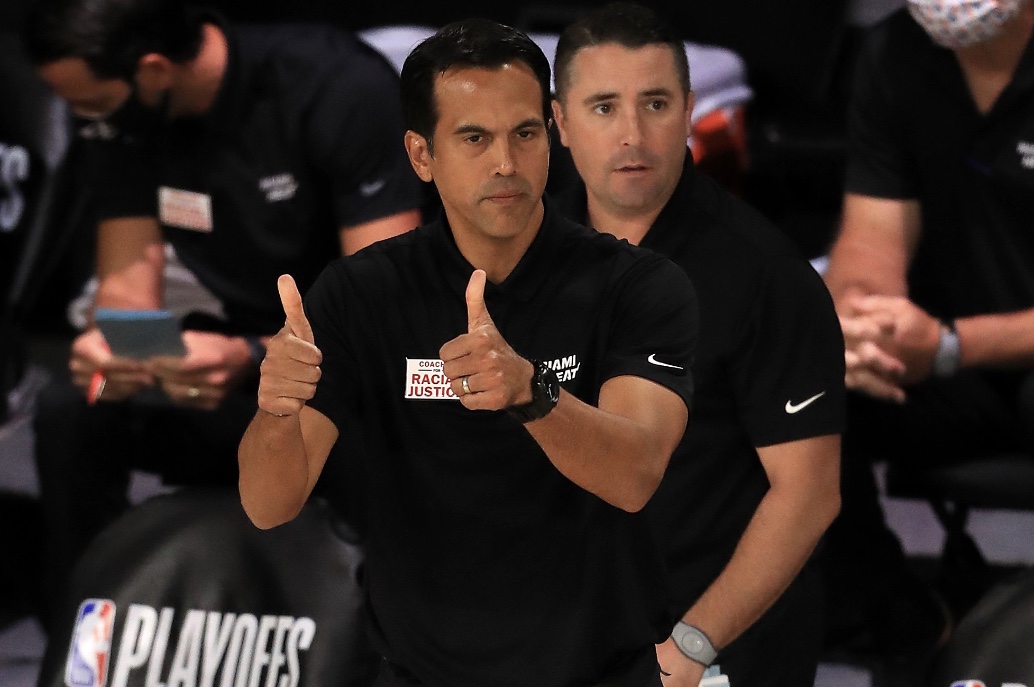 The Miami Heat are currently 10-1 in this year’s post-season, but who is the main reason for that?

Is it Bam Adebayo’s unbelievable impact?

Although these are viable options, it seems as Erik Spoelstra deserves a lot of the credit.

Game two of the Eastern Conference Finals definitely put a stamp on that, when Spo not only made huge adjustments, but got this team focused. The Heat were playing like a team up 1-0 in the series during the first half, which is very unlike them to do so. But it seemed as if every player came out of the locker room at halftime with the same exact amount of energy. They were back to Miami Heat basketball.

Spo then made the adjustments that ultimately won them this game. He inserted Derrick Jones Jr in the lineup in the second half over Kendrick Nunn, and it worked as you’d expect. Derrick matches up well with this Boston team defensively, since he can guard any of Boston’s iso players one-on-one. But he didn’t need to play much defense one-on-one, since Spo adjusted to the 2-3 zone defense, which is where DJJ fits perfectly. Not only because of his quickness and length to get steals, but just the discomfort that he gives guys with the ball in their hands.

He also adjusted some offensive schemes as well, utilizing Bam Adebayo on the pick and rolls. They know Bam is not going to take Boston’s bigs in the post on the offensive side, but he will play above, around, and under the rim.

This is just a one game sample size of the things Spo has had to do to come away with wins.

He had to make some tough decisions entering the playoffs as well. Benching Kendrick Nunn for Goran Dragic, removing Meyers Leonard from the rotation, and even giving Tyler Herro the reigns of the offense late in big playoff games. But ultimately, this has a little something to do with Spo knowing his personnel.

He knew Goran would step up to the plate to give him quality starting minutes, and he knew Meyers Leonard would step down and still utilize his voice and leadership on the sideline. That’s because these guys share the same mentality as Spo, they just want to win.

Jimmy Butler said to media after game two, “He makes everybody feel comfortable. Hell, I’m glad he’s my coach.” Even Heat legend Dwyane Wade talked about the success of Spoelstra, saying “He’s a great coach man. He won’t get the respect from the outside, but from all of us who really know, he got it.”

Erik Spoelstra and this Heat team are now two wins away from the NBA finals. And if you don’t think that Spo has something else up his sleeve to close out this series, you are absolutely wrong.

Brady Hawk (@BradyHawk305) is a regular on Five on the Floor properties.

Houtz Special: Dolphins should ‘stay the course’ with Tua Tagov...