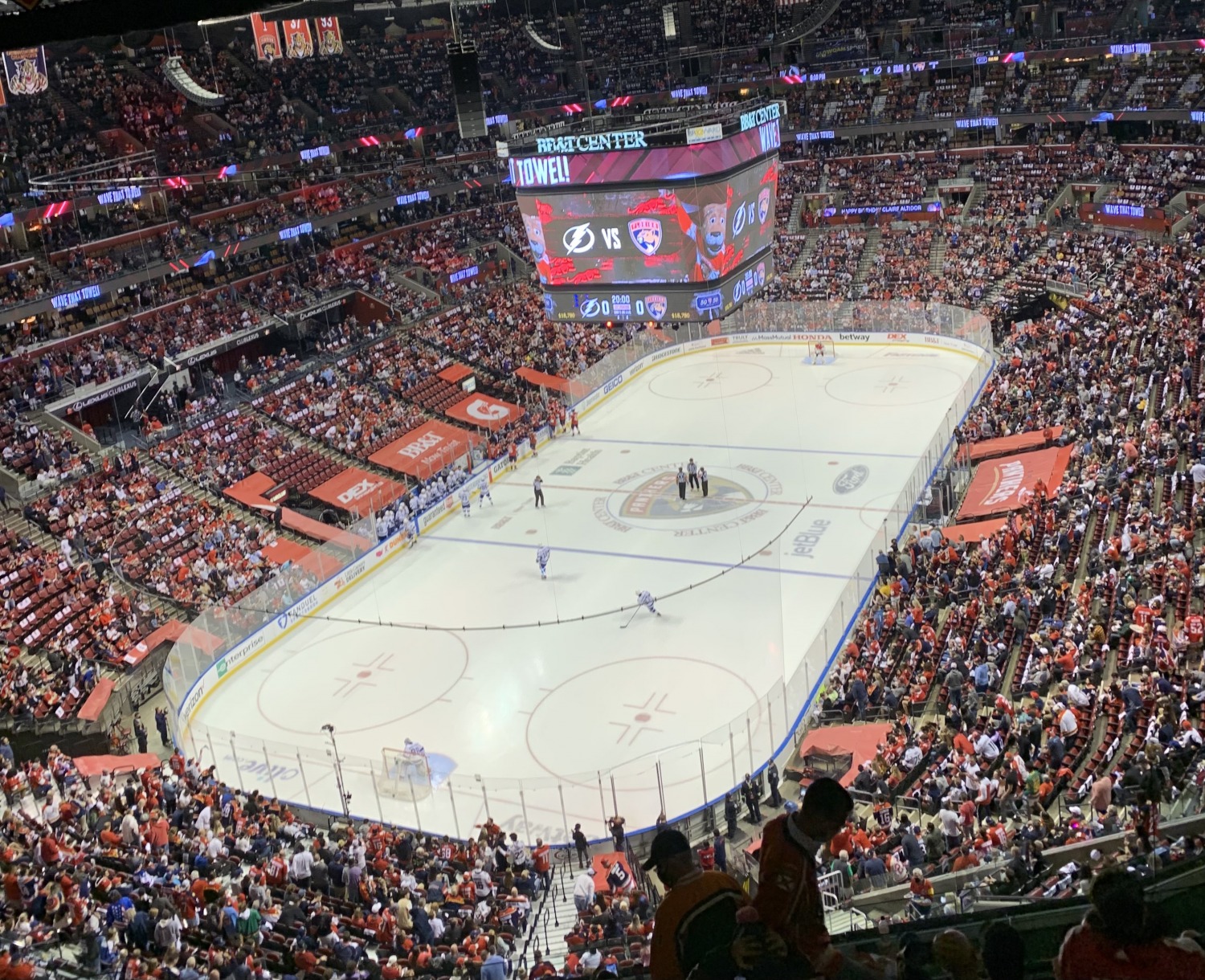 The Florida Panthers seem to be on the right track towards building a Stanley Cup contending team. After one year of the Bill Zito regime in Florida, the Panthers finished second in the Discover Central Division and clinched a playoff berth before losing in the first round to the defending Stanley Cup Champions, the Tampa Bay Lightning.

While the core of this team is well established with the likes of Jonathan Huberdeau, Aleksander Barkov and Aaron Ekblad, there are some exciting prospects in the pipeline who could help the Panthers sooner than you think.

For the purpose of this list, players who have completed a full season in the NHL won’t be eligible, like Owen Tippett. However, Grigori Denisenko only played in seven regular season games and would still be considered a rookie next season, thus making him a prospect.

Here are the five best prospects in the Florida Panthers organization.

It was pretty obvious that Spencer Knight would rank at the top of this prospects list. The 20-year-old goalie was selected 13th overall by Florida in the 2019 NHL Draft and has already become a fan favourite in Sunrise. Usually you don’t see goalies picked in the first round of the draft, but Florida rolled the dice to get their franchise goalie. Including Knight, there have only been eight goalies selected in the first round since 2010. It is clear that Florida had a lot of confidence about his future as an NHL starter when they took him that early in the draft.

Knight finished off his two years at Boston College with a 39-12-3 record, posted a .932 save percentage in his sophomore season and capped off his collegiate/junior hockey career winning a gold medal with Team USA at the 2021 IIHF World Junior Hockey Championships.

After his season ended with Boston College, Knight signed his entry-level contract with the Panthers and immediately stole the show. Knight went a perfect 4-0-0, with a .919 save percentage and a 2.32 GAA  in the 2020-2021 NHL regular season. When the Panthers were down three games to one in the first round of the Stanley Cup Playoffs to the Lightning, Knight was given the opportunity to start in his first career playoff game. He stole the show, stopping 36 of Tampa’s 37 shots in a 4-1 victory.

In his limited appearances with the Panthers, Knight showed flashes of elite goaltending ability. You could see he was calm in the net and had the ability to make the big saves when he needed to.

Spencer Knight is the goalie of the future for the Florida Panthers and he will be in contention for next year’s starting job after Sergei Bobrovsky’s less than stellar second season with the Cats.

Like Knight, Lundell has a really good chance of not only making Florida’s roster for the 2021-2022 season but playing a meaningful role on the team.

Selected 12th overall by the Panthers in the 2020 NHL Draft, 19-year-old Anton Lundell plays an extremely similar game to his fellow countryman and Florida captain Aleksander Barkov. Lundell isn’t the flashiest player by any means, but he is a great skater with an amazing hockey IQ. The 6’1, 195 lbs center plays a great two-way game, which is extremely valuable in today’s NHL.

As a teenager, Lundell spent three seasons playing for HIFK in Finland’s top professional league, Liiga. In the 2020-2021 campaign, he nearly averaged a point per game, finishing the year with 25 points in 26 games.

Lundell also found success at the international level this past year with Finland. He started off 2021 on a high note, winning bronze at the World Juniors as Finland’s captain with 10 points in seven games. Lundell was no match for his opposition that tournament. Every time he had the puck he skated by the other team as if they weren’t there, you could tell he was better than most players in his age group. Lundell continued his success with the national team just a few weeks ago at the 2021 IIHF Ice Hockey World Championships. He finished the tournament with seven points in 10 games, leading all Finnish skaters en route to a silver medal. Keep in mind, this tournament was with the senior national team and his competition were all professional hockey players, including many from the NHL.

Next season I could see Lundell slot in nicely as the Panther’s third line center. It would give him valuable minutes on the top-nine while still not forcing him to play too much in crunch time situations with the likes of Barkov and Sam Bennett centering the top-six. Even if he spends next season in the AHL, all the signs are pointing towards Lundell developing into a top two-way center.

Drafted 15th overall in the 2018 draft, it didn’t take long for Grigori Denisenko to get a shot with the Florida Panthers. The 5’11 Russian winger spent two full seasons in the Kontinental Hockey League (KHL), undoubtedly one of the best professional hockey leagues after the NHL. At 20-years-old, Denisenko made the jump to North America, splitting time between the Panthers and the AHL’s Syracuse Crunch. Denisenko had an impressive 9 points in 15 games with the Crunch and 4 assists in seven games with the Panthers.

Offensively, Denisenko is everything you want in a winger. He is a smooth skater who has great edge work and agility. On top of his skating, Denisenko has an elite shot that he can get off the stick quickly and effectively. When I look at his skill set, I immediately think of another 5’11 Russian winger and current New York Ranger Artemi Panarin. I’m not saying Denisenko will be as good as Panarin, but I see some similarities in their game.

I don’t expect Denisenko to be a regular with the Panthers next season, but I do think he could split the year between the AHL and NHL. Between the Panthers forward depth and Denisenko barely being 21 when the season starts, It wouldn’t surprise me if Florida continues to develop his game before giving a bigger role with the main team, whether that is towards the end of next season or later.

Looking at the Panthers prospect list, there aren’t too many top defensive prospects to be excited about. Luckily for Florida, they were able to sign Matt Kiersted last season after he finished his college hockey career with the University of North Dakota (UND). Through his four seasons at UND, Kiersted had 77 points in 127 games and was a plus 37.

Kiersted had limited chances last season with the Panthers, playing in only seven games and not dressing in the playoff series against Tampa. What I did see from Kiersted in those games was a surprisingly calm composure on the blueline. He plays a very tight gap when defending, but it works because of his foot speed and that is something that will help him against the fastest players in the world.

Florida’s blueline wasn’t the greatest after Aaron Ekblad went down with an injury last season. Unless Florida acquires another top-four defenseman in free agency, I think Kiersted should be on the team over some of the guys who were given minutes in the playoffs.

While the first three players on this list were all first round picks, Aleksi Heponiemi was selected in the second round by the Cats in the 2017 NHL Draft. After scoring 204 points in 129 games with Swift Current Broncos of the Western Hockey League (WHL), Heponiemi went back to Finland to play for Kärpät in Liiga. After a 46 point season in Finland, he made the move to the Springfield Thunderbirds of the AHL, where he had 14 points in 46 games.

This past season, Heponiemi made his NHL debut with the Panthers and scored his first career NHL goal against the Detroit Red Wings. In 9 games with the Cats, Heponiemi had 2 points.

I do have some concerns for Heponiemi at the NHL level. He’s a smaller guy, clocking in at 5’10, 155 pounds, according to NHL.com. Heponiemi was so effective in junior because he used his foot speed to blow by the other teams’ defenders and create his own space. He can still use his speed in the NHL, but the defenseman are a lot quicker in transition than the guys he saw in the WHL and way more physical. I think he needs to put on 10-15 more pounds and play in the 165-170 range so he can be stronger on the puck against NHL defenders.

Barring an amazing training camp, I expect Heponiemi to start next season in the AHL, with the possibility he gets called up to the Panthers throughout the season.