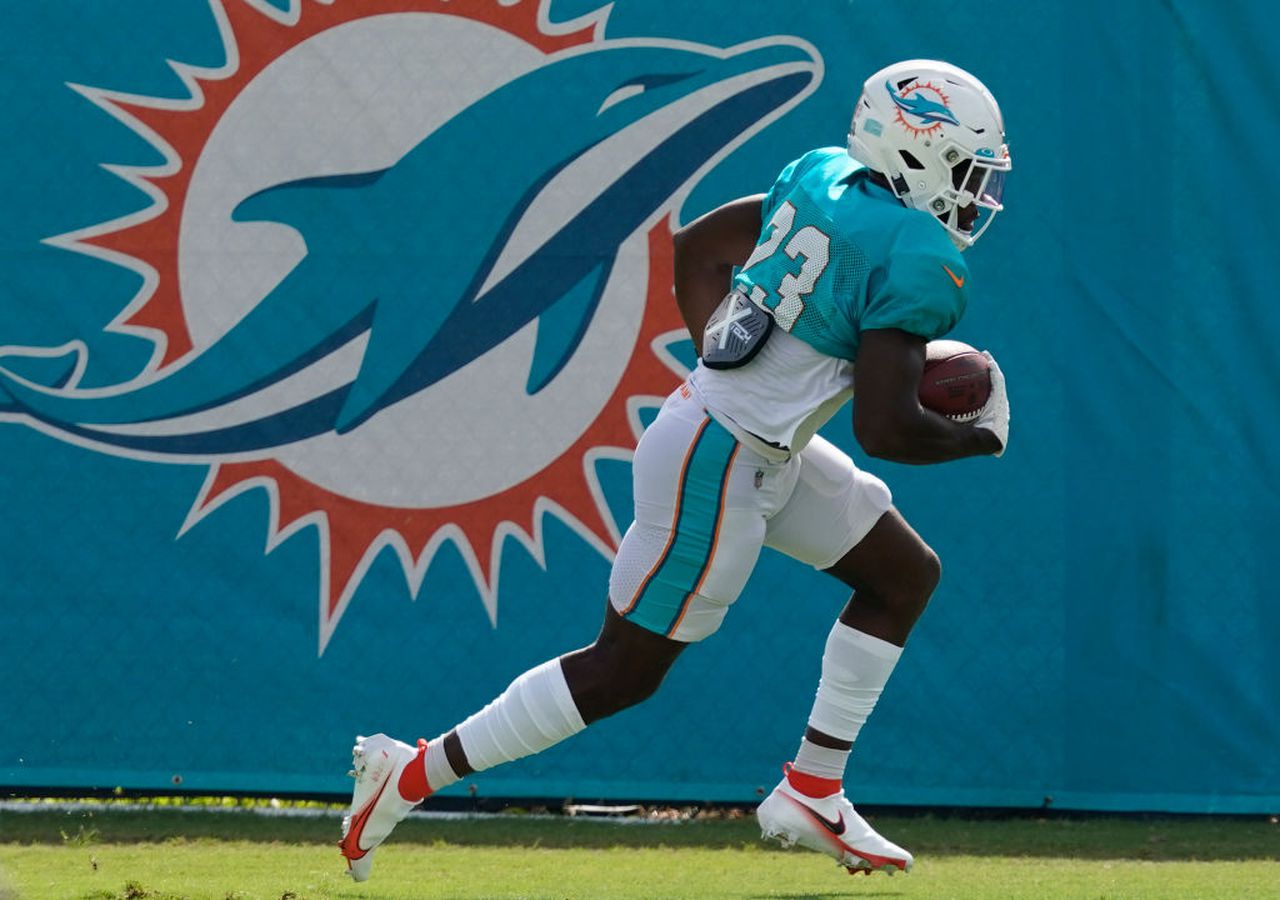 Back in December 2020, I typed up a column breaking down that Dolphins fans needed to have patience when it comes to Tua Tagovailoa. Now, some believe Tagovailoa is worth investing in. Others are desperately begging the Dolphins to move on before it’s too late. This comes as no surprise. However, with all the pieces the front office has surrounded Tagovailoa with, it’s clear Miami is being patient. However, there’s another second-year player in the crosshairs of social media. That player is cornerback Noah Igbinoghene out of Auburn.

From the moment he was drafted, Igbinoghene has been viewed skeptically. Why would the Miami Dolphins decide to draft another cornerback when they already invested heavily in Xavien Howard and Byron Jones? The obvious answer is potential for injury, which did happen. The veteran Jones missed two games, which forced Igbinoghene into the fire.

The result wasn’t pretty. Noah Igbinoghene found himself facing off against Stefon Diggs, one of the game’s premier wide receivers. To put it bluntly, Diggs made Igbinoghene look like a rookie. Fortunately, that’s precisely what he was, and should not have been expected to be anything else. The Detroit Lions drafted Jeffrey Okudah with the 3rd overall pick in 2020, and he struggled in his rookie season as well. So why the level of vitriol for a younger, less experienced player in Igbinoghene?

Probably the biggest factor against Igbinoghene is where he was drafted. First round picks are expected to be instant contributors, regardless of their position. If they’re good enough to be drafted in the first round, they must be elite talents and should play. However, this simply isn’t the case.

One must consider the position the Miami Dolphins were in last season. They were in the process of replenishing their roster and trying to establish a core for a long-term future. Head coach Brian Flores clearly believes a top level secondary is crucial to that end. Not surprising, given his background with the New England Patriots. But the core of the problem is that cornerback was not necessarily a position of need for Miami.

What was a position of need, was running back.

At the time of Noah Igbinoghene being announced as the pick, all four of the top running back prospects were still available. D’Andre Swift, Jonathan Taylor, J.K. Dobbins, Clyde Edwards-Helaire, any one of those players would have given the running back room a huge boost. And all four players are producing with their new teams. Meanwhile, the Dolphins’ top running back in 2020 was Myles Gaskin. Not exactly an inspiring reality.

Miami also needed a safety instead of another corner. They could have selected Alabama standout Xavier McKinney, or Antoine Winfield Jr., but instead chose Igbinoghene, knowing that he likely would not have much playing time. It’s not his fault there were two other superstars on the team blocking his path, he’s just doing what he can to improve in his situation. Unfortunately, that does not change the mindset that he’s a bust simply because he did not see the field often in 2020.

Why be patient with Noah Igbinoghene?

Let’s get one thing clear right now. Noah Igbinoghene is far from a draft bust. He is not Jamar Fletcher. He’s not Jamar Taylor. He is not Cordrea Tankersley. He is himself, and no one knows what he will become as of yet. That is the crux of the matter. There is ample amounts of film showing why Igbinoghene is worth investing time and effort into coaching up. Even top wide receivers from this draft singled out Igbinoghene as the toughest corner they ever went up against in college. Particularly, Heisman winner DeVonta Smith.

Devonta Smith calls Dolphins CB Noah Igbinoghene the best DB he ever went against in college in an AMA on Bleacher Report.

Think about what kind of praise that is. Smith has faced off against some of the toughest competition during his tenure at Alabama, including his own teammate Patrick Surtain II in every single practice. Surtain, by the way, is expected to be an immediate contributor for the Denver Broncos, and many considered him the best corner of the draft between him and Jaycee Horn out of South Carolina.

Igbinoghene was more of a challenge to Smith than him? Impressive. But there were other players he faced that could have uprooted Igbinoghene from his pedestal, and his opinion never changed.

Then, of course, there’s the film that puts what Noah Igbinoghene is capable of on full display. He was responsible for locking down some of the best wide receivers in college football, including Smith and Ja’Marr Chase, who many draft pundits considered to be the best wide receiver of the 2021 class.

Just for the heck of it.

He had some rough games this past season, but don't sleep on @Noah_Igbo9. With more experience, he can be a top corner.

His physical talent is unquestionable, he’s simply raw and requires time to grow into his role as a boundary cornerback. So all that’s left is to ask the question: Where is he now?

During the offseason, it was revealed that Igbinoghene has been training with Miami’s star cornerback Xavien Howard to try and fix some of the issues he had last season. If there’s anyone who knows what it’s like to go through growing pains, it’s Howard, whose rookie season was less than stellar.

This offseason, #Dolphins CB Noah Igbinoghene has been training with teammate Xavien Howard, the NFL’s reigning interception leader and a 2020 First Team All-Pro.

Now Igbinoghene finds himself in the same situation, hoping to make a big leap in his second season just like Howard did. According to defensive backs coach Gerald Alexander, Igbinoghene is on his way to doing just that.

“Noah was in a situation last year where he was able to really concentrate and develop.” Alexander said. “Again, this is a guy that hasn’t played the cornerback position for very long in his career, not just his pro career. He’s developed a lot just as far as his technique, his fundamental footwork, his transitioning and then not to mention developing in our defense and what we’re asking him to do. Now it’s time to take really the next step and also learning some stuff on the inside. Now getting a chance to know what the run game looks like and know what keys to look at and guard guys in the slot that are dealing with a little bit more space and having a little bit more presence in the middle of the field, or any help versus out there on the perimeter.”

Since Igbinoghene’s level of experience wasn’t up to par with other prospects, most of the focus was just easing him in to playing on the boundary. He’s going to be asked for more this season, but Alexander prefaced his comments by saying Igbinoghene still has plenty of work to do.

So what should be expected of Noah Igbinoghene? When should Dolphins fans expect to see a return on the team’s investment? Remember, Xavien Howard and Byron Jones have both been injured in the past. Backup are necessary if something happens to either of them. That makes his development crucial in that regard.

There’s also the reality that Miami has shown no hesitance to part ways with expensive veterans. Kyle Van Noy and Shaq Lawson are perfect examples. If they feel at any point Igbinoghene has developed to the point where he can safely take over for either Xavien Howard or Byron Jones, one of them may find themselves on the trade block, and the Dolphins could once again receive a huge haul of draft picks to further their team philosophy of development.

But to that end, there is currently no rush to throw Noah Igbinoghene into the fire again. If he is needed, the team will call on him. Until then, let him learn and grow into his position without the hindering the team if he struggles. He isn’t a bust. He’s a long-term investment.

“I think he has the potential to do a lot of special things as we’ve always thought about him and his skillset.” said Alexander. “It’s just a matter of putting the work in and having it apply on the field and being consistent in the performance.”

How the Heat Get Past Giannis and Crew Again