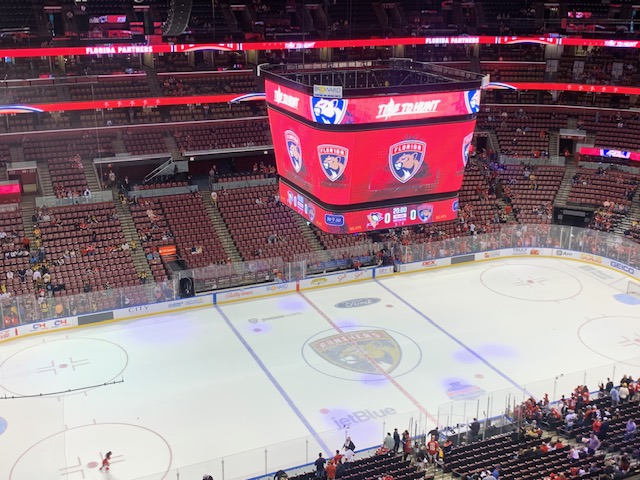 The Florida Panthers are off to the hottest start in franchise history, heading into Thursday with a record of 8-0-1. As a top team in the NHL, the Panthers have had a lot go right for them to start the year.

Here are five keys to the Panthers hot start this season.

The biggest question mark heading into this season was the Panthers goaltending. With Sergei Bobrovsky and Spencer Knight as the goalie tandem, many wondered who would be the main guy and how well the duo would play.

Throughout the first nine games, Bobrovsky has started six of them, winning all of them. He has a 1.81 GAA, a .944 save percentage and has only given up 11 goals all season. Rookie Spencer Knight has had the crease three times this year and posted a 1.95 GAA alongside a .929 save percentage and a 2-0-1.

With Bobrovsky looking like his former Vezina self and Knight playing three solid games, it seems like the Panthers goalie situation is solid for now.

The return of Aaron Ekblad

Aaron Ekblad is back from the injury that kept him sidelined for a large portion of last season and the entirety of the playoffs. Florida getting their number one defenseman back into the lineup was a huge key point going into this season. Ekblad jumped right back into the mix and didn’t miss a beat.

In nine games, the 25-year-old has seven points and is a +10 on the season. He is once again paired with MacKenzie Weegar and the d-pair are shaping out to be one of the best lines in pro hockey.

Ekblad being back not only reinserted one of the best defenseman in the league into Florida’s lineup, it took the weight off the shoulders of guys like Weegar, Gustav Forsling and Brandon Montour, who had to step up in the absence of Ekblad last season. Forsling hasn’t seen a drop in his game this season either, he has seven points in nine games.

With Florida’s best defenseman back, the blueline has continued to secure the fort.

While the power play hasn’t been something to brag over, Florida’s penalty kill definitely deserves the praise.

Florida is one of the most penalized teams so far this season, being short handed a total of 36 times through nine games. However, the PK percentage is 86.11, ranking them top eight in the NHL.

The Panthers penalty kill has seen a lot of new faces on it this season. While Aleksander Barkov and Radko Gudas are still on the kill, Florida has used Jonathan Huberdeau, Sam Bennett and most surprisingly, 20-year-old rookie Anton Lundell frequently on the kill. The PK has been effective this year and it will need to stay on form over the 82 game season.

The Panthers forward depth was mentioned in our Florida Panthers season preview and they lived up to the praise that was given.

While the top-six is always relied on to provide offense, the bottom-six has really stepped up this season.

With injuries and roster moves, the third line has seen a few different guys cycle in and out of the lineup, but that hasn’t slowed them down. When healthy, Anton Lundell, Mason Marchment and Sam Reinhart have seemed to build some chemistry together. Eetu Luostarinen has also done a solid job centering the bottom-six in the absence of Lundell.

For the fourth line, the ageless veterans Joe Thornton and Patric Hornqvist have worked nicely alongside Frank Vatrano. The line doesn’t score a lot but they work hard and get under the skin of the opposing team.

And obviously the we know the big boys on this team were going to get going. Anthony Duclair and Carter Verhaeghe have looked great this season alongside Barkov; Sam Bennett and Jonathan Huberdeau have been red hot all season and their linemate Owen Tippett has had his fair share of scoring as well.

The team is playing well together and they’re putting the puck in the back of the net. 14 different Panthers have scored at least one goal this season and the team has a goal differential of +18.

He hasn’t been in the lineup for the last four games, but the play of this rookie was too good not to mention.

First off, Anton Lundell proved he can compete in the NHL. The youngster has five points in five games, has the best face off percentage on the team with 54.79% win rate and he has been entrusted on the Panthers penalty kill.

When he is in the lineup, you can’t ignore him. For a player so young to be able to not only make decisions as quickly and effectively as he does but to also be trusted by the team to play big minutes on the penalty kill shows how confident the organization is in their 2020 first-round pick.

Lundell is a smart player who plays a great two-way game. He will win you draws, back check and make the defensive play and put the puck in the net. You can see flashes of another Finnish center in his game, his roommate and Panthers captain Aleksander Barkov.

Should the Miami Dolphins go all-in on Deshaun Watson?