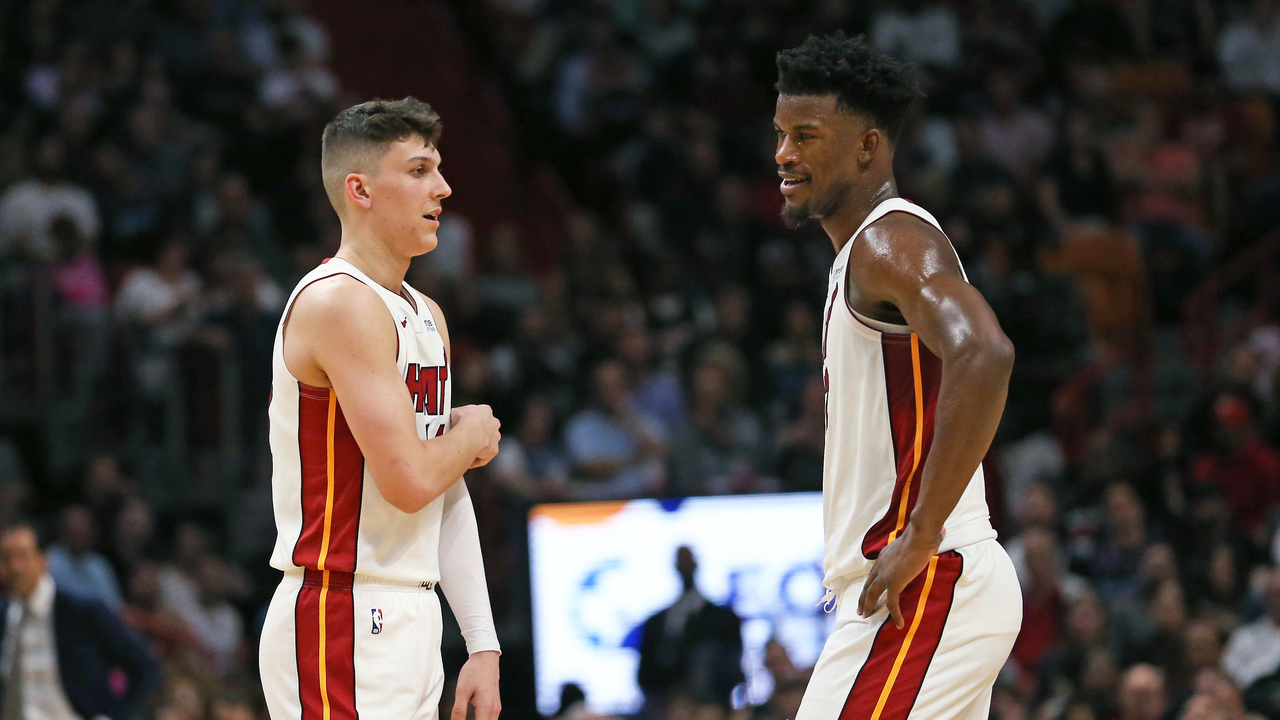 We’ve reached the end of the Miami Heat preseason and South Florida sports fans couldn’t be happier. Miami has now played an entire regular season, postseason, and almost a whole preseason before the one-year anniversary of their Finals defeat. While preseason records are not indicative of what’s to come; there are some things you can take from these games. General playing style, rotations, and placement of roles are a few that tend to bleed into the regular season. I’ll be taking a look at a few of these examples and others that especially caught my eye throughout most of the games. Some of these will definitely excite Heat fans, but there are a couple of worrisome spots as well.

One of the big stories coming into Miami Heat Media Day was the newly chiseled Tyler Herro. The former Kentucky Guard is out to prove a point this season. While you see many stories of guys gaining muscle during the offseason, nothing much comes from it once the games get started. “Muscle Watch” only goes as far as the player implements it into their actual play. For Herro, he’s already shown how beneficial the new weight has been for his play. One thing that caught my attention was how his lower body strength has improved an already pretty jump shot. You can see how much easier it is for Tyler to shoot coming off of screens now.

Last season (black jersey, mirrored above) he needed to dip lower in order to get more power. Now (white jersey) you can see how much easier it is for him to immediately go into the pull-up; no longer needing to exert as much strength.

The newly added lower body and core strength also help Herro get a higher apex on his jump shot. One of the shortcomings many had for Tyler out of college was his wingspan. It has been said that he can negate that with the height he possesses. 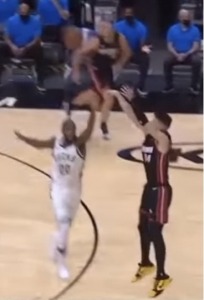 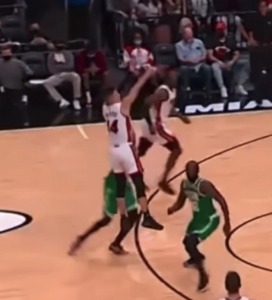 Now with the added height, he’s added it will be even easier for him to shoot over defenders. He’s making the game easier for himself and has led to great results so far. Hopefully, it continues into the regular season.

During the opening of Media Day, Coach Spoelstra talked about the pace that Kyle Lowry would bring to Miami. Heat fans and media employees scoffed at the idea due to how slow the Heat have played since 2014. However, pace doesn’t always mean playing like the 2007 Golden State Warriors. Pace can also mean getting into sets quicker, attacking in semi-transition, or constant movement at a consistent rate.

Kyle Lowry has already shown how much he’s going to help in all of these phases. The various ways he can attack in transition and semi-transition are akin to what I remember Dwyane Wade and LeBron James did. Lowry is not the athlete that those two were, but the way he manipulates space and reads defenders is very similar. He has shown his mastery at reading the exact moment defenses start to relax in transition and exploiting it for easy baskets.

Lowry knows some of the players, including himself, on the team won’t be able to run throughout a regular season. That’s why he’s been selective in the opportunities so far. Veterans play to the team’s strengths and fans shouldn’t worry about running out of gas late in the season. It’s a nice change of pace to have a team getting into sets faster instead of waiting until 15 seconds on the shot clock.

Once again going back to Media Day, Gabe Vincent talked about the expectation of having more ball-handling duties. After the preseason it still feels like those backup point guard duties might be leaning the way of  Tyler Herro. While Gabe Vincent has shown he can be semi-capable in this role, Herro has shown so much improvement with his on-ball reps that it’s hard to argue with him not having the ball in his hands more.

Miami may have had a plan to give Gabe more responsibility, it looks like Herro’s newfound ways of attacking pick-and-rolls might have won him the defacto backup PG role. I imagine Lowry or Butler will be on the floor 98 percent of the time and the need for a definitive backup won’t be much of an issue. Hopefully, Vincent can focus on getting his jumper going to help the assist numbers of Herro early on.

Erik Spoelstra and the Miami Heat have had a great track record of helping journeymen stretch 4s find their footing in the league. Players like Luke Babbitt, Okaro White, James Johnson, and Jae Crowder have had great success within the Heat system. However, Markieff Morris seems to be struggling to find what type of role he’ll be in early on. It is early but the returns are not strong so far.

Morris appears to be a player who’s best suited as a small-ball 5 on a team that already has a solid backup 5 in Dewayne Dedmon. It doesn’t hurt to have lineup versatility, but Morris isn’t good enough as a small 5 to warrant much hoopla. Markieff’s role will hopefully be figured out, or it seems much more likely Miami will be looking to add a different 4. Someone in the vein of Thaddeus Young to help during the buyout market or trade deadline most likely.

We all heard the comments that Bam Adebayo made that he’ll look to be a shooter this season. The early returns after a full preseason lineup with those remarks. Adebayo averaged 18.7 FGA 7.4 FTA per 36 minutes in the dress rehearsals. Compare that to his 20-21 averages of 12.5 FGA and 5.5 FTA, it’s quite an uptick. Not only are his eyes focused on the rim at all times, but his teammates are constantly looking for him. Kyle Lowry has especially been a big part of Adebayo’s uptick in shots. It’s astonishing watching Lowry look for his big man on quick seals and transition opportunities. He’s using the athletic weapon on the Heat roster to his fullest powers.

Lowry is finally unleashing the big advantages that have been there for years for Miami. I expect Lowry to help Adebayo in the same way Chris Paul did DeAndre Ayton this past season. There will be some warts to deal with as well. Bam has had trouble finishing off self-created opportunities in the preseason. He has also health with his share of turnovers when his initial move is cut off. These sorts of issues should get ironed out with more reps and it will be fun when they do. It will be his first season truly being utilized in this role, so you can’t blame him for needing constant reps. He’s in for a big year and the Heat will go as far as he takes them.

Road to the Orange Bowl: Cincinnati needs to make it to the CFP
Scroll to top