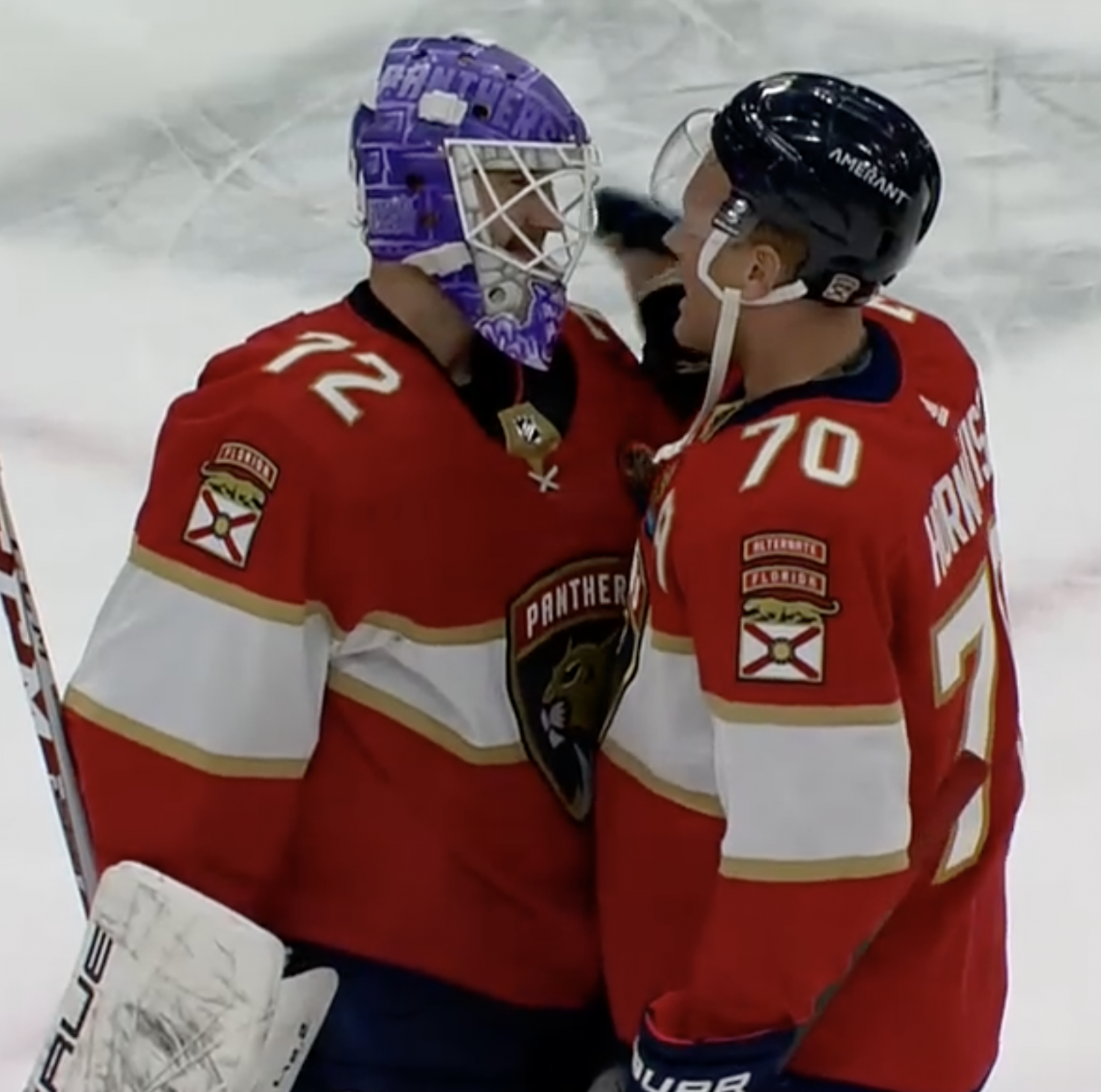 For the first time since last season’s playoffs, the Florida Panthers and Washington Capitals faced off at FLA Live Arena.

Florida won the game 5-2, backstopped by a stellar performance from Sergei Bobrovsky and two-goal night from Carter Verhaeghe.

The Sam’s are buzzing

It was no secret that both Sam Reinhart and Sam Bennett had slower starts to the season than they would have liked. Both players respectively had the best season of their careers in 2021-2022, so there was some cause for concern as the two had only one goal between them when Florida hit the road a few weeks ago.

The Sam’s seemed to have gotten over the snake bite ever since they both got on the board in the game against Anaheim on Nov. 6.

Tonight, Reinhart scored a baseball style goal on the powerplay as he batted the puck from midair past Capitals goalie Darcy Kuemper.

Unlike Saturday where he scored twice against Edmonton, Bennett didn’t find the back of the net tonight, however he was very noticeable on the ice against Washington, specifically when the Panthers were skating in transition and when he was around the front of goal.

When the Sam’s are going, good things happen for the Panthers.

Florida winning the special teams battle won them the game

You never want to give the Washington Capitals a power play… why? There’s this guy on their team that is 13 goals away from having the second most of all-time in NHL history. Yes, it’s Alex Ovechkin.

Ovi has a permanent residence on the left faceoff circle in every hockey arena across the world. He has the most powerplay goals all-time with 290 and counting. So you don’t want to give him a chance to get 291.

Florida went to the box five times tonight, which isn’t ideal after what was mentioned about Ovechkin. Yet, Florida came up huge on the penalty kill, going 5-for-5 on the PK, due in large part to the great game played by goaltender Sergei Bobrovsky.

The power play was perfect, literally

The Panthers penalty kill was 100 percent tonight. As for the power play, which has been a struggle for most of this season, that department also had a perfect night, scoring on their one and only attempt of the game.

Florida usually gets more than one crack at the man-advantage on most nights as their fast transition game and offensive zone play gets teams to bite. Tonight, that wasn’t the case with Washington going to the box only once, but that one penalty cost them a goal against as Sam Reinhart scored to give the Panthers a 2-0 lead in the second period.

Florida’s missed opportunities on special teams has hurt them in close games this season, but tonight it was the opposite.

Sergei Bobrovsky was more than solid – 40 saves and the win

For the last three games prior to tonight, the crease was Spencer Knight’s. Because of that, Bob hasn’t played in 10 days, with his last start coming on Nov. 5 in Los Angeles.

Tonight, Bobrovsky was back in the net and his performance propelled Florida to the win tonight.

Bob ended the night with 40 saves and was the brick wall that kept Washington scoreless on the power play.

During the third period, Washington was all over Florida for most of the frame, putting 21 shots on Bob and scoring a goal to make it a one-goal game.

With the Panthers looking like they could lose the lead at any minute, Bob kept the team in check with his play, before the late game goal support came in from Carter Verhaeghe.

It seems like when Carter Verhaeghe scores, he does it in bunches – which isn’t wrong as he’s scored two goals in a game four times this year while scoring one goal only twice.

The Capitals are no stranger to Verhaeghe’s offensive abilities as he dominated them in the playoffs last season with 12 points in six games.

Verhaeghe missed a few shifts in the game tonight as he went to the Panthers dressing room after taking a hit up high from Capitals forward Lars Eller. It was a good sign to see him come back to the bench, and it was even better to see him score the two insurance goals late in the third.

The entire top line got on the scoresheet tonight, with Sasha Barkov and Matthew Tkachuk both picking up three points in the win.